Macronutrients, as the name suggests, are the nutrients required by the plants in large amounts. These include carbon, hydrogen, oxygen, nitrogen, phosphorus, sulfur, calcium and potassium. Carbon, hydrogen, and oxygen are obtained from air and water while the others are obtained from the soil. Micronutrients are the ones required in very small amounts by the plants. These include iron, zinc, boron etc. In addition to these, some elements like silicon, cobalt, selenium, and sodium are present which are required by higher plants. The elements referred to as macronutrients and micronutrients can be further divided into the following categories: 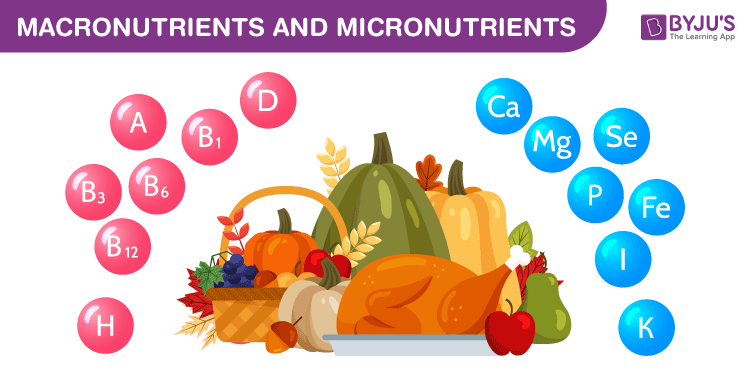 Let us now have a look at the roles of these macronutrients and micronutrients.

All the essential elements perform several functions like they maintain the osmotic concentration of the cell sap, have buffering action, show enzymatic activity and act as a major constituent of macromolecules and coenzymes. Functions of some important elements are as follows:

Nitrogen: It is required by plants in large amounts. It is taken in the form of ions from the soil. It is required for the division of cells. It is the major constituent of proteins, vitamins, hormones etc.

Phosphorus: It is a constituent of cell membranes, proteins, and nucleic acids and is required for certain important reactions.

Potassium: It is a mineral that is required in the growing parts of the plants in large amounts. It is also required for the opening and closing of stomata. It helps in the activation of enzymes and helps in maintaining the turgidity of the cell.

Calcium: It is required during cell division and in the normal functioning of the cell membrane. Metabolic activities are also regulated by this mineral.

Magnesium: It is involved in the activation of enzymes in respiration and photosynthesis and helps in the synthesis of DNA and RNA. It is also an important constituent of ribosomes and helps in maintaining the structure of the ribosome.

Sulfur: It is an important constituent of amino acids, coenzymes, and vitamins.

Iron: It is required in larger amounts as compared to other micronutrients. It is an important constituent of protein and helps with the activation of enzymes.

Manganese: Enzymes involved in photosynthesis, respiration etc are activated by this. It helps in the splitting of water during photosynthesis.

Chlorine: Chlorine helps in determining the solute concentration and the anion-cation balance of the cells.

Stay tuned with BYJU’S to learn more about the macronutrients and micronutrients.