Inside our Earth Chapter 2 of Class 7, Geography covers topics such as Interior of the Earth, Rocks and Minerals, Types of Rocks, Types of Minerals, etc. For students, it is essential to know the facts about our planet in which we live. Each topic is explained beautifully with proper illustrative examples. Students can also refer to CBSE Class 7 Geography notes of Chapter 2 – Inside our Earth if they find it difficult to understand any concept. These notes are best when students want to revise the important concepts of the chapter quickly.

Chapter 2 Inside Our Earth

Interior of the Earth

The Earth is made up of several concentric layers with one inside another. The uppermost layer over the earth’s surface is called the crust. It is the thinnest of all the layers. It is about 35 km on the continental masses and only 5 km on the ocean floors. The main mineral constituents of the continental mass are silica and alumina. It is thus called sial (si-silica and al-alumina). The oceanic crust mainly consists of silica and magnesium; it is therefore called sima (si-silica and ma-magnesium).

Mantle is just beneath the crust, which extends up to a depth of 2900 km below the crust. The innermost layer is the core with a radius of about 3500 km. It is mainly made up of nickel and iron and is called nife (ni – nickel and fe – ferrous i.e. iron). The central core has a very high temperature and pressure.

The earth’s crust is made up of various types of rocks.

Rock – Any natural mass of mineral matter that makes up the earth’s crust is called a rock. It can be of different colour, size and texture. There are three major types of rocks:

Watch this video to learn more about Igneous Rocks 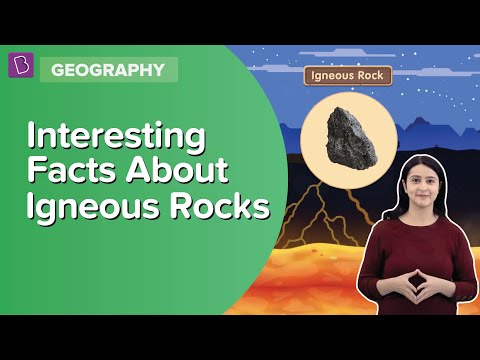 Intrusive igneous rocks – Sometimes the molten magma cools down deep inside the earth’s crust. Solid rocks so formed are called intrusive igneous rocks. Granite is an example of such a rock. Grinding stones used to prepare paste/powder of spices and grains are made of granite.

Igneous and sedimentary rocks can change into metamorphic rocks under great heat and pressure. For example, clay changes into slate and limestone into marble.

Rock cycle: The process of transformation of the rock from one to another is known as the rock cycle.

Rocks are made up of different minerals. Minerals are naturally occurring substances which have certain physical properties and definite chemical composition. For example, coal, natural gas and petroleum. They are also used in industries – iron, aluminium, gold, uranium, etc, in medicine, in fertilisers, etc.

What is present in the interior of Earth?

Earth’s interior is generally divided into three major layers: the crust, the mantle and the core.

Sandstone is a type of sedimentary rock and one of the most common types of it.

What are ‘Metamorphic rocks’?

Metamorphic rocks are rocks that have become changed by intense heat or pressure while forming.