A desert is a barren area of landscape where little precipitation occurs and, consequently, living conditions are hostile for plant and animal life. It is classified as hot deserts or cold deserts. Extreme temperatures combined with little rainfall make desert life difficult for people, plants, and animals. Students can understand the chapter Life in the Deserts thoroughly by going through these CBSE Class 7 Geography notes for Chapter 9, available on our BYJU’S website.

Chapter 9 Life In The Deserts

Desert is an arid region characterized by extremely high or low temperatures and has scarce vegetation. Depending on the temperatures there can be hot deserts or cold deserts.

Sahara is the world’s largest desert. It has an area of around 8.54 million sq. km. The Sahara desert touches eleven countries – Algeria, Chad, Egypt, Libya, Mali, Mauritania, Morocco, Niger, Sudan, Tunisia and Western Sahara. In the Sahara desert, there are gravel plains and elevated plateaus with bare rocky surface. These rocky surfaces may be more than 2500m high at some places.

Sahara desert climate is extreme, scorching hot and parched dry. It has a short rainy season. The sky is cloudless and clear. Here, the moisture evaporates faster than it accumulates. The temperatures during the day may soar as high as 50°C, heating up the sand and the bare rocks, which in turn, radiates heat making everything around hot. The nights may be freezing cold with temperatures nearing zero degrees.

In the Sahara desert vegetation includes cactus, date palms and acacia. In some places, there are oasis – green islands with date palms surrounding them. Camels, hyenas, jackals, foxes, scorpions, many varieties of snakes and lizards are the prominent animal species living there.

The Sahara desert has been inhabited by various groups of people, who pursue different activities. Among them are the Bedouins and Tuaregs who are nomadic tribes rearing livestock such as goats, sheep, camels and horses. These animals provide them with milk, hides from which they make leather for belts, slippers, water bottles; hair is used for mats, carpets, clothes and blankets. They wear heavy robes as protection against dust storms and hot winds.

The oasis in the Sahara and the Nile Valley in Egypt supports settled population. Since water is available, the people grow date palms. Crops such as rice, wheat, barley and beans are also grown. Egyptian cotton, famous worldwide, is grown in Egypt. The discovery of oil is constantly transforming the Sahara desert. Other minerals found in the area include iron, phosphorus, manganese and uranium.

The cultural landscape of the Sahara is undergoing change. Gleaming glass cased office buildings tower over mosques and superhighways crisscross the ancient camel paths. Trucks are replacing camels in the salt trade. Tuaregs are seen acting as guides to foreign tourists. More and more nomadic herdsmen are taking to city life finding jobs in oil and gas operations.

Ladakh is a cold desert lying in the Great Himalayas, on the eastern side of Jammu and Kashmir. The Karakoram Range in the north and the Zanskar mountains in the south enclose it. Several rivers flow through Ladakh, and among them, Indus being the most important. Several glaciers are found in Ladakh, for example, the Gangri glacier.

The altitude in Ladakh varies from about 3000m in Kargil to more than 8,000m in the Karakoram. Due to its high altitude, the climate remains extremely cold and dry. The air at this altitude is so thin that the heat of the sun can be felt intensely. The day temperatures in summer are just above zero degrees and the night temperatures well below –30°C. Ladakh lies in the rain shadow of the Himalayas, due to which it receives little rainfall, as low as 10 cm every year. The area experiences freezing winds and burning hot sunlight.

Due to high aridity, the vegetation is sparse. There are scanty patches of grasses and shrubs for animals to graze. Groves of willows and poplars are seen in the valleys. During the summers, fruit trees such as apples, apricots and walnuts bloom. Robins, redstarts, Tibetan snowcock, raven and hoopoe are sighted in Ladakh. Some of these are migratory birds. The animals of Ladakh are wild goats, wild sheep, yak and special kinds of dogs. The animals are reared to provide for the milk, meat and hides.

People of Ladakh are either Muslims or Buddhists. In fact, several Buddhists monasteries dot the Ladakhi landscape with their traditional ‘gompas’. Some famous monasteries are Hemis, Thiksey, Shey and Lamayuru.

In the summer season, the people are busy cultivating barley, potatoes, peas, beans and turnip. The climate in winter months is so harsh that people keep themselves engaged in festivities and ceremonies. The women work not only in the house and fields, but also manage small business and shops. Leh, the capital of Ladakh is well connected both by road and air.

Tourism is a major activity with several tourists streaming in from within India and abroad. Life of people is undergoing change due to modernisation. The people of Ladakh over the centuries learned to live in balance and harmony with nature. Due to scarcity of resources like water and fuel, they are used with reverence and care.

For More Information On Deserts and Its Classification 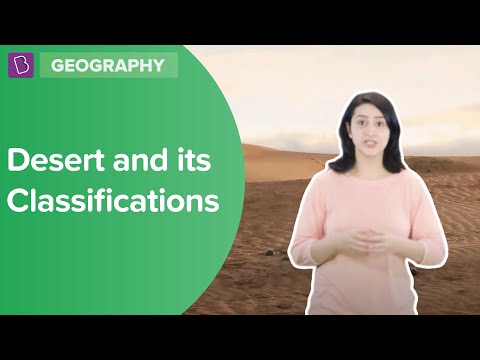 Where is Sahara located?

The Sahara is the world’s largest desert; it extends across most of the northern part of Africa.

What is flora and fauna?

The flora and fauna of a place are its plants and animals.

What are the types of deserts?