Find the CBSE Class 7 Notes for Social Science History Chapter 2 from the link given below in this article. Students can refer to these and prepare most competently for the exam.

The Emergence of New Dynasties

By the 7th century different regions of the subcontinent had big landlords and warrior chiefs, who were acknowledged as the subordinates or samantas by the existing kings. They had to bring gifts for their kings and overloads and had to be present at their courts and provide military support. However, as these samantas gained power and wealth they declared themselves as maha-samanta, maha-mandaleshvara (the great lord of a “circle” or region) and so on. At times, they even asserted their independence from their overlords.

Given is the example of Rashtrakutas in the Deccan, who were subordinates to the Chalukyas of Karnataka. In the mid 8th century, Dantidurga, a Rashtrakuta chief, overthrew his Chalukya overlord and performed a ritual called hiranya-garbha (literally, the golden womb) with the help of Brahmanas. This ritual was thought to lead to the “rebirth” of the sacrificer as a Kshatriya, even if he was not one by birth.

In other cases, men from enterprising families used their military skills to carve out kingdoms like the Kadamba Mayurasharman and the GurjaraPratihara Harichandra. They were Brahmanas who gave up their traditional professions and took to arms, successfully establishing kingdoms in Karnataka and Rajasthan respectively.

Administration in the Kingdoms

New kings took up high-sounding titles such as maharaja-adhiraja (great king, overlord of kings), tribhuvana-chakravartin (lord of the three worlds) and so on. However, they also shared power with their samantas as well as with associations of peasants, traders and Brahmanas. In these states, resources were obtained from the producers (peasants, cattle-keepers, artisans and so on) who were often persuaded or compelled to surrender part of what they produced, sometimes, claimed as “rent” due to a lord who asserted that he owned the land. Revenue was also collected from traders. These resources were used to finance the king’s establishment and for the construction of temples and forts. They were also used to fight wars, thus leading to the acquisition of wealth in the form of plunder, and access to land as well as trade routes. The functionaries for collecting revenue were generally recruited from influential families, and positions were often hereditary. This was true about the army as well. In many cases, close relatives of the king held these positions.

For More Information On How Kingdoms Functions and Administration In Maratha Swaraj, Watch The Below Video: 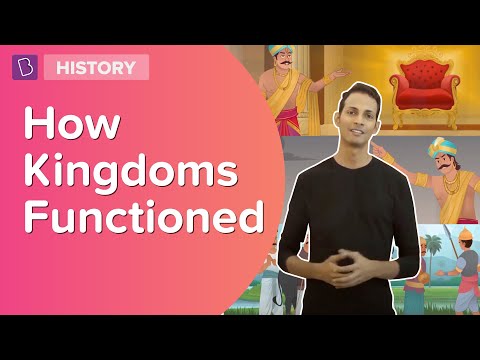 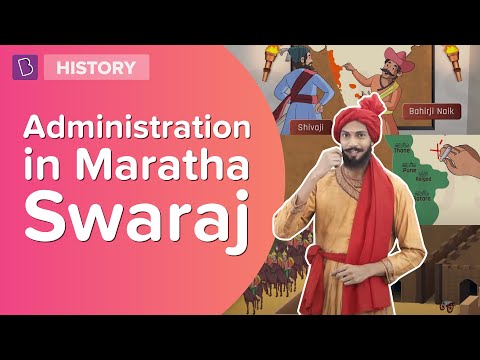 Prashastis composed by learned Brahmanas, who occasionally helped in the administration, contain details that may not be literally true but will tell us how rulers wanted to depict themselves – as valiant, victorious warriors, for example. Kings often rewarded Brahmanas by grants of land, which were recorded on copper plates. These plates were given to those who received the land. Unusual for the 12th century was a long Sanskrit poem containing the history of kings who ruled over Kashmir composed by an author named Kalhana who was often critical about rulers and their policies, unlike other writers. He used a variety of sources, including inscriptions, documents, eyewitness accounts and earlier histories, to write his account.

Ruling dynasties though based in a specific region also tried to control other areas. The city of Kanauj in the Ganga valley is a prized area, to get control over which rulers belonging to the Gurjara-Pratihara, Rashtrakuta and Pala dynasties fought for centuries. Since there were three “parties” involved in this long drawn conflict, historians describe it as “tripartite struggle”. Rulers also tried to demonstrate their power and resources by building large temples. Hence, when they attacked one another’s kingdoms, they often chose to target temples, which were sometimes extremely rich.

One such ruler is Sultan Mahmud of Ghazni, Afghanistan who ruled from 997 to 1030 and extended control over parts of Central Asia, Iran and the north-western part of the subcontinent. He raided the subcontinent almost every year – his targets being wealthy temples, including that of Somnath, Gujarat. The wealth Mahmud carried away was used to creating a splendid capital city at Ghazni. Sultan Mahmud wanted to find out more about the people he conquered and entrusted a scholar named Al-Biruni to write an account of the subcontinent in his Arabic work, known as the Kitab ul-Hind after consulting Sanskrit scholars. Other kings who engaged in warfare included the Chahamanas, later known as the Chauhans, who ruled over the region around Delhi and Ajmer. They attempted to expand their control to the west and the east, where they were opposed by the Chalukyas of Gujarat and the Gahadavalas of western Uttar Pradesh. The best-known Chahamana ruler was Prithviraja III (1168-1192), who defeated an Afghan ruler named Sultan Muhammad Ghori in 1191, but lost to him the very next year, in 1192.

A Closer Look: The Cholas

From Uraiyur to Thanjavur

How did the Cholas rise to power? A minor chiefly family known as the Muttaraiyar, who were subordinate to the Pallava kings of Kanchipuram held power in the Kaveri delta. In the middle of the 9th century, Vijayalaya, who belonged to the ancient chiefly family of the Cholas from Uraiyur, captured the delta from the Muttaraiyar. He built the town of Thanjavur and a temple for goddess Nishumbhasudini there. The successors of Vijayalaya conquered neighbouring regions and the kingdom grew in size and power going on to include the Pandyan and the Pallava territories to the south and north. Meanwhile, Rajaraja I, one of the most powerful Chola ruler, became king in 985, expanded control over most of these areas and also reorganised the administration of the empire. Rajaraja’s son Rajendra I continued his policies and even raided the Ganga valley, Sri Lanka and countries of Southeast Asia, developing a navy for these expeditions.

For More Information On The Great Chola Dynasty of India, Watch The Below Video:

Big temples of Thanjavur and Gangaikondacholapuram- built by Rajaraja and Rajendra-architectural and sculptural marvels. Chola temples often became the nuclei of settlements, which grew around them and were centres of craft production. Temples were also endowed with land by rulers as well as by others. The produce of this land went into maintaining all the specialists who worked at the temple and very often lived near it – priests, garland makers, cooks, sweepers, musicians, dancers, etc. Temples-not only places of worship; but also the hub of economic, social and cultural life. Amongst the crafts associated with temples, the making of bronze images was the most distinctive. Chola bronze images are considered amongst the finest in the world. While most images were of deities, sometimes images were made of devotees as well.

Most of the achievements of the Cholas were possible via the new developments in Agriculture.

River Kaveri branched off into several small channels before emptying into the Bay of Bengal. These channels overflow frequently, depositing fertile soil on their banks. Water from the channels also provides the necessary moisture for agriculture, particularly the cultivation of rice. Although agriculture had developed earlier in other parts of Tamil Nadu, it was only from the 5th or 6th century that this area was opened up for large-scale cultivation.

Forests had to be cleared in some regions, while the land had to be levelled in other areas. In the delta, region embankments had to be built to prevent flooding and canals had to be constructed to carry water to the fields. In many areas, two crops were grown in a year. In many cases, it was necessary to water crops artificially. A variety of methods were used for irrigation. In some areas, wells were dug. In other places, huge tanks were constructed to collect rainwater. Remember that irrigation works require planning – organising labour and resources, maintaining these works and deciding on how water is to be shared. Most of the new rulers, as well as people living in villages, took an active interest in these activities.

The Administration of the Empire

How was the administration organised? The spread of irrigation agriculture led to the prosperity of Settlements of peasants, known as ur. Groups of such villages formed larger units called Nadu. The village council and the Nadu performed several administrative functions including dispensing justice and collecting taxes. Rich peasants of the Vellala caste exercised considerable control over the affairs of the Nadu under the supervision of the central Chola government. The Chola kings gave some rich landowners titles like muvendavelan (a velan or peasant serving three kings), araiyar (chief), etc. as markers of respect, and entrusted them with important offices of the state at the centre.

Brahmanas received a large number of land grants or brahmadeya, thus leading to the emergence of a large number of Brahmana settlements in the Kaveri valley as in other parts of South India. Each brahmadeya was looked after by an assembly or sabha of prominent Brahmana landholders, who worked very efficiently. Their decisions were recorded in detail in inscriptions, often on the stone walls of temples. Associations of traders known as anagrams also occasionally performed administrative functions in towns. Inscriptions from Uttaramerur in Chingleput district, Tamil Nadu, provide details of the way in which the sabha was organised. The sabha had separate committees to look after irrigation works, gardens, temples, etc. Names of those eligible to be members of these committees were written on small tickets of palm leaf; these tickets were put into an earthenware pot, from which a young boy was asked to take out the tickets, one by one for each committee.

What is a ‘Dynasty’?

Dynasty is a family or line of rulers, a succession of sovereigns of a country belonging to a single family or tracing their descent to a common ancestor

What is the meaning of ‘Prashastis’?

Prashasti is an Indian genre of inscriptions composed by poets in praise of their rulers.

What is Thanjavur famous for?

Thanjavur is an important center of South Indian religion, art and architecture. The Thanjavur temple has a massive colonnaded prakara/corridor and one of the largest Shiva lingas in India.