Ruling a large territory as the Indian subcontinent involving such a diversity of people and cultures was an extremely difficult task to accomplish in the Middle Ages. However, in contrast to their predecessors, the Mughals created an empire and accomplished what had before seemed possible for only short periods of time. From the latter half of the 16th century, they expanded their kingdom from Agra and Delhi, going on to control nearly all of the subcontinent in the 17th century. They imposed structures of administration and ideas of governance that outlasted their rule. It left a political legacy, which the succeeding rulers of the subcontinent could not ignore. These concepts are discussed at length in Chapter 4 of CBSE Class 7 History. Students can also use CBSE Notes Class 7 History Chapter 4-The Mughal Empire to revise the entire Chapter for the exam.

Given below in this article is the PDF link to download the CBSE Class 7 Social Science Notes for History Chapter 4. Start downloading to prepare for the exam.

Who were the Mughals?

Descendants of two great lineages of rulers-Genghis Khan (died 1227), the Mongol ruler who ruled over parts of China and Central Asia from mother’s side-successors of Timur (died 1404), the ruler of Iran, Iraq and modern-day Turkey from father’s side-Mughals did not like to be called Mughal or Mongol as Genghis Khan’s memory was associated with the massacre of innumerable people-it was also linked with the Uzbegs, their Mongol competitors-they were proud of their Timurid ancestry because their great ancestor had captured Delhi in 1398.

Babur- 1st Mughal emperor (1526- 1530)- succeeded the throne of Ferghana in 1494, when only 12 years old-forced to leave his ancestral throne due to the invasion of another Mongol group, the Uzbegs- seized Kabul in 1504-In 1526 defeated the Sultan of Delhi, Ibrahim Lodi, at Panipat-captured Delhi and Agra. 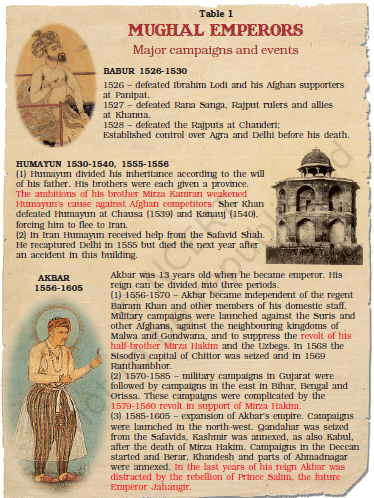 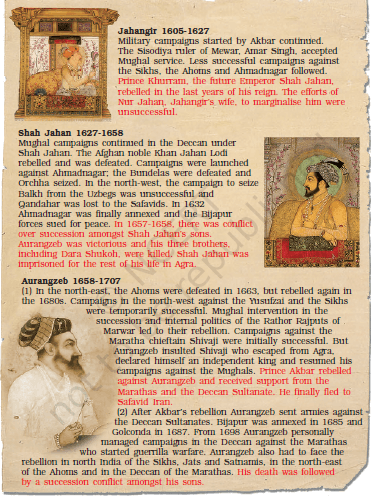 For More Information On Babur and The Battle Panipat 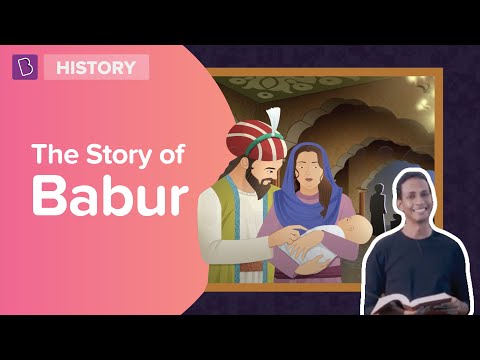 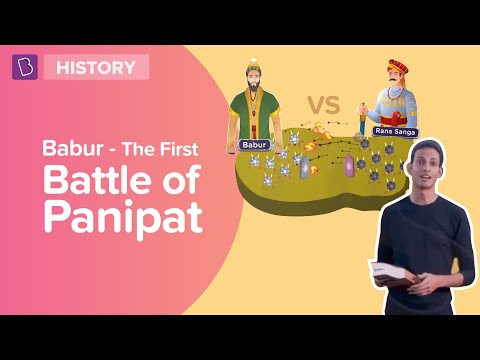 Did not believe in the rule of primogeniture (where the eldest son inherited his father’s estate)-followed the Mughal and Timurid custom of coparcenary inheritance (a division of the inheritance amongst all the sons).

Mughal Relations with Other Rulers

Mughal rulers campaigned constantly against rulers who refused to accept their authority. However, as they became powerful many rulers like the Rajputs joined them voluntarily. Many of the Rajputs married their daughters into Mughal families and received high positions. Many resisted as well. For example, Sisodiya Rajputs of Mewar refused to accept Mughal authority. However, upon defeat, they were honourably treated by the Mughals, given their lands (watan) back as assignments (watan jagir). This careful balance between defeating but not humiliating their opponents enabled the Mughals to extend their influence over many kings and chieftains. However, it was difficult to keep this balance all the time.

For More Information On Mughal Relation with Other Rulers 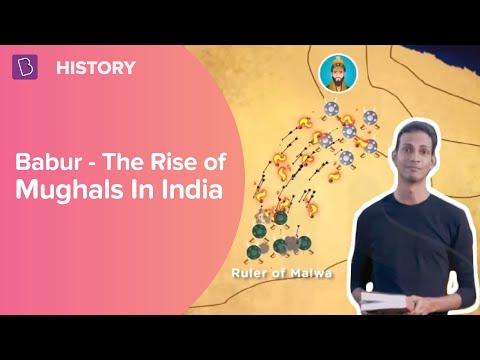 Empire expanded to include different regions-Mughals recruited diverse bodies of people-from Turkish nobles (Turanis) they went on to include Iranians, Indian Muslims, Afghans, Rajputs, Marathas and other groups-some joined Mughal service as mansabdars- term refers to an individual who holds a manaab, meaning a position or rank- grading system used by Mughals to rate (1) rank, (2) salary and (3) military responsibilities-Rank and Salary determined by numerical value, Zat-higher the zat, the more prestigious the noble’s position in court and larger his salary- mansabdar’s military responsibilities require him to maintain specific number of sawar or cavalrymen-cavalrymen were reviewed, registered and their horses branded before the mansabdar received the money to pay them as salary-mansabdar’s salaries were revenue assignments called jagirs, somewhat like iqtas-however, unlike muqtis, most mansabdars did not administer their jagirs- mansabdars only had rights to the revenue of their assignments collected for them by their servants, while they themselves served in another part of the country-During Akbar’s reign Jagirs were assessed so that their revenues were roughly same as the salary of the mansabdar-However, things changed by Aurangazeb’s rule-during this time, actual revenue collected was often less than the granted sum-the number of mansabdars also increased, thus leading to a long wait before they received a jagir-these and other factors led to shortage in the number of jagirs- jagirdars tried to get as much revenue as possible while they had a jagir-Aurangazeb unable to control these developments during the end of his reign-peasantry suffered.

The main source of income for Mughal Rulers-tax on the produce of the peasantry. Some of these taxes were paid by the peasants via the rural elites like the headman or the local chieftain, termed as Zamindars by the Mughals. Todar Mal, Akbar’s revenue minister took a careful survey of the crop yields, prices and areas cultivated for a 10 year period (1570-1580). Based on this data, the tax was fixed on each crop in cash. Every province was divided into revenue circles with its own schedule of revenue rates for the individual crops-revenue system called zabt- prevalent in areas where Mughal administrators could survey the land and keep very careful accounts-not possible in provinces like Gujarat and Bengal-In some areas, the Zamindars exercised more power-exploitation by Mughal administrators could lead them to rebellion-at times zamindars and peasants of the same caste also allied in rebelling against Mughal Authority-peasant revolt challenged the stability of the Mughal Empire from the end of 17th century.

The administration laid down by Akbar-elaborately discussed by Abul Fazl in the book Akbar Nama-in its last volume the Ain-i Akbari-empire was divided into provinces called subas-governed by a subadar who carried out both political and military functions-every province had a financial officer or diwan-subadar was supported by other officers such as the military paymaster (bakhshi), the minister in charge of religious and charitable patronage (sadr), military commanders (faujdars) and the town police commander (kotwal) in order to maintain peace and order in the province-Akbar’s nobles commanded large armies-had access to large amounts of revenue-when they were loyal the empire functioned efficiently but by end of 17th century, many nobles had independent networks-loyalties to the empire weakened by self-interest-Akbar when at Fatehpur Sikri during the 1570s started discussions on religion with the ulama, Brahmanas, Jesuit priests who were Roman Catholics, and Zoroastrians-discussions took place in the ibadat khana-Akbar’s interaction with people of different faiths made him realise that religious scholars who emphasised ritual and dogma were often bigots-their teachings created divisions and disharmony amongst his subjects- led Akbar to the idea of sulh-i kul or “universal peace”- idea of tolerance did not discriminate between people of different religions in his realm- it focused on a system of ethics – honesty, justice, peace – that was universally applicable-Abul Fazl helped Akbar in framing a vision of governance around this idea of sulh-i kul-This principle of governance were followed by Jahangir and Shah Jahan.

The Mughal Empire in the 17th Century and After

The administrative and military efficiency led to great economic and commercial prosperity-International travellers described it as the fabled land of wealth-state of poverty also existed side by side with the greatest opulence-inequalities were glaring-Documents from 20th year of Shah Jahan’s reign show that the highest-ranking mansabdars were only 445 in number out of a total of 8,000-amounts to a mere 5.6% of the total number of mansabdars–received 61.5% of the total estimated revenue of the empire as salaries for themselves and their troopers-spent a great deal of their income on salaries and goods-expenditure benefited the artisans and peasantry who supplied them with goods and produce-however, scale of revenue collection left very little for investment in the hands of the primary producers (the peasants and the artisan)-poorest lived a hand to mouth existence-could not invest in additional resources (tools or supplies) to increase productivity- wealthier peasantry and artisanal groups, merchants and bankers profited in this economic world- enormous wealth and resources commanded by Mughal Elite made them extremely powerful in the late 17th century-as the authority of the Mughal Emperor declined, his servants emerged as powerful centres of power in the regions, constituting new dynasties and holding command of provinces like Hyderabad and Awadh-they continued to recognise the Mughal emperor in Delhi as their master-by 18th century, the provinces of the empire consolidated their independent political identities.

What was the culture of ancient Mughals?

The Empire he founded was a sophisticated civilisation based on religious toleration. It was a mixture of Persian, Mongol and Indian culture.

What was the Mughal Empire known for?

The Mughal Empire was important for bringing almost the entire Indian subcontinent under one domain. They also had an influence on the architecture and culture aspect.

What is the meaning of ‘Zabt’?

Zabt was a type of land revenue system that was framed during the Mughal period.