Delhi became an important city only in the twelfth century. It was the capital of a kingdom under the Tomara Rajputs who were defeated in the middle of the 12th century by the Chauhans (also referred to as Chahamanas) of Ajmer. Students can learn more about Delhi Sultans from Chapter 3 of CBSE Class 7 History. We have also compiled the CBSE Notes Class 7 History Chapter 3-Delhi Sultans for the students to revise the Chapter.

Find the link below in this article to download the PDF version of the CBSE Class 7 Social Science Notes of History Chapter 3.

Under the Tomaras and Chauhans, Delhi became an important commercial centre. Many rich Jaina merchants lived in the city and constructed several temples. Coins called dehliwal were minted here and had a wide circulation. Transformation of Delhi into a capital that controlled vast areas of the subcontinent started with the foundation of the Delhi Sultanate at the beginning of the 13th century. The Delhi Sultans built many cities in the area that we now know as Delhi. 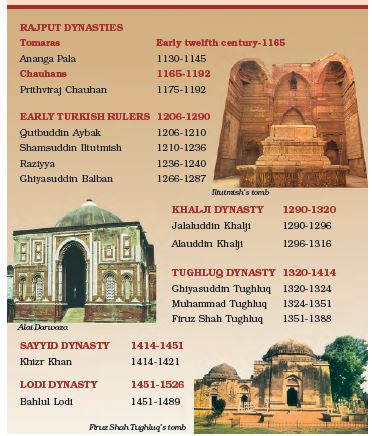 Finding Out about the Delhi Sultans

Tarikh (singular)/tawarikh (plural) are valuable histories, written in Persian, the language of administration under the Delhi Sultans that provide a lot of information. It was written by learned men- secretaries, administrators, poets and courtiers, who both recounted events and advised rulers on governance, emphasising the importance of the just rule. Following ideas to keep in mind:

(1) the authors of tawarikh lived in cities (mainly Delhi) and hardly ever in villages.

(2) They often wrote their histories for Sultans in the hope of rich rewards.

(3) These authors advised rulers on the need to preserve an “ideal” social order based on birth right and gender distinctions.

Not everybody followed these ideas.

In 1236-Sultan Iltutmish’s daughter, Raziyya became Sultan-chronicler of the age, Minhaj-i Siraj, stated she was more able and qualified than all her brothers-He was not comfortable at having a queen as ruler- Nobles not happy at her attempts to rule independently. 1240-She was removed from the throne.

From Garrison Town to Empire: The Expansion of the Delhi Sultanate

In the early 13th century-control of the Delhi Sultans rarely went beyond heavily fortified towns occupied by garrisons- Sultans seldom controlled the hinterland of the cities-were dependent upon trade, tribute or plunder for supplies-was difficult to control garrison towns in distant Bengal and Sind from Delhi-Rebellion, war, even bad weather caused disconnection of fragile communication routes-Delhi’s authority challenged by Mongol invasions from Afghanistan and by governors who rebelled at any sign of the Sultan’s weakness-The Sultanate barely survived this challenges-consolidation occurred during the reign of Ghiyasuddin Balban and further expansion under Alauddin Khalji and Muhammad Tughluq- first set of campaigns along the “internal frontier” of the Sultanate aimed at consolidating the hinterlands of the garrison towns-campaigns involved forests being cleared in the Ganga-Yamuna doab and expulsion of hunter-gatherers and pastoralists from their habitat-lands were given to peasants-agriculture encouraged-New fortresses, garrison towns and towns were established to protect trade routes-to promote regional trade-second expansion occurred along the “external frontier” of the Sultanate-Military expeditions into southern India started during the reign of Alauddin Khalji- culminated with Muhammad Tughluq-In their campaigns, Sultanate armies captured elephants, horses and slaves and carried away precious metals-By the end of Muhammad Tughluq’s reign, the armies of the Delhi Sultanate had marched across a large part of the subcontinent-defeated rival armies and seized cities-Sultanate collected taxes from the peasantry and dispensed justice in its realm.

A mosque called a masjid in Arabic, is a place where a Muslim prostrates in reverence to Allah. In a “congregational mosque” (masjid-i-jami or jama masjid) Muslims read their prayers (namaz) together. Members of the congregation choose the most respected, learned male as their leader (imam) for the rituals of prayer, who also delivers the sermon (khutba) during the Friday prayer. During prayer, Muslims stand facing Mecca. In India this is to the west. This is called the qibla. Delhi Sultans built several mosques in cities all over the subcontinent and it demonstrated their claims to be protectors of Islam and Muslims.

A Closer Look: Administration and Consolidation under the Khaljis and Tughluqs

Consolidation of a kingdom (as vast as the Delhi Sultanate) requires reliable governors and administrators. Early Delhi Sultans, especially Iltutmish did not appoint aristocrats and landed chieftains as governors. They favoured their special slaves purchased for military service(called bandagan in Persian). The Khaljis and Tughluqs continued to use bandagan and also raised people of humble birth, who were often their clients, to high political positions and appointed them as generals and governors leading to political instability. Slaves and clients were loyal to their masters and patrons, but not to heirs. The accession of a new monarch often saw conflict between the old and the new nobility. Patronage of these humble people by the Delhi Sultans shocked many elites and the authors of Persian tawarikh criticised the Delhi Sultans for appointing the “low and base-born” to high offices.

The Khalji and Tughluq monarchs appointed military commanders as governors of territories of varying sizes (called iqta) and their holder was called iqtadar or muqti- duty of the muqtis to lead military campaigns and maintain law and order in their iqtas-In exchange for their military services, the muqtis collected the revenues of their assignments as salary-paid their soldiers from this revenues-to make the control over muqtis most effective their office was not inheritable-they were assigned iqtas for a short period of time before being shifted-appointed accountant checked the amount of revenue collected by the muqtis-As the Delhi Sultans brought the hinterland of the cities under their control, they forced the landed chieftains – the Samanta aristocrats and rich landlords to accept their authority-Under Alauddin Khalji, the state brought the assessment and collection of land revenue under its own control- rights of the local chieftains to levy taxes cancelled and were also forced to pay taxes-Some of the old chieftains and landlords serve the Sultanate as revenue collectors and assessors.

There were three types of taxes: (1) on cultivation called kharaj and amounting to about 50% of the peasant’s produce, (2) on cattle and (3) on houses-Large parts of the subcontinent remained outside the control of the Delhi Sultans-was difficult to control distant provinces like Bengal from Delhi-after annexing southern India, the entire region became independent- In the Gangetic plain, there were forested areas that Sultanate forces could not penetrate- Local chieftains established their rule in these regions-Rulers like Alauddin Khalji and Muhammad Tughluq could force their control for a short duration in these areas.

1219- Mongols under Genghis Khan invaded Transoxiana in north-east Iran-Delhi Sultanate faced their onslaught soon after-Mongol attacks on the Delhi Sultanate increased during the reign of Alauddin Khalji and in the early years of Muhammad Tughluq’s rule-forced the two rulers to mobilise a large standing army in Delhi which posed a huge administrative challenge.

See, below how both the sultans dealt with these administrative challenges: 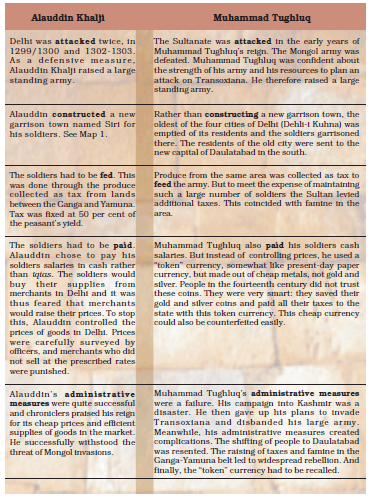 For More Information On Khalji and Tughluk Dynasties 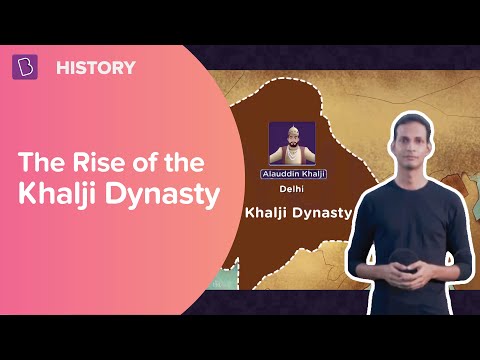 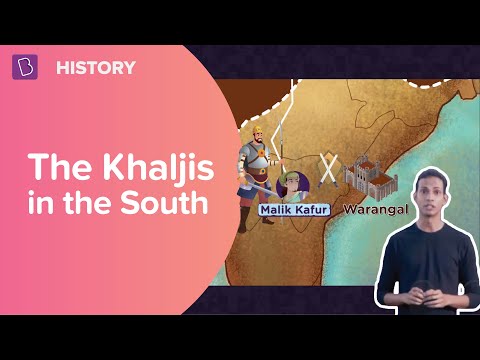 The Sultanate in the 15th and 16th Centuries

Tughluqs, the Sayyid and Lodi dynasties ruled from Delhi and Agra until 1526- Jaunpur, Bengal, Malwa, Gujarat, Rajasthan and entire south India had independent rulers in this time – they established flourishing states and prosperous capitals- period saw the emergence of new ruling groups like the Afghans and the Rajputs-small but powerful and extremely well administered. Sher Shah Sur (1540-1545) started his career as the manager of a small territory for his uncle in Bihar and eventually challenged and defeated the Mughal emperor Humayun (1530-1540, 1555-1556)-captured Delhi and established his own dynasty-Sur dynasty ruled for fifteen years (1540-1555)-introduced an administration that borrowed elements from Alauddin Khalji and made them more efficient-Sher Shah’s administration became the model for great emperor Akbar (1556-1605) when he consolidated the Mughal Empire.

Why were the ‘Delhi Sultans’ famous?

During the Sultanate period, there was a tremendous change in the architectural practices of the subcontinent at large. This period also witnessed the growth of Indo-Islamic architecture.

Who was ‘Alauddin Khilji’?

Alauddin Khalji was a powerful ruler from the Khalji dynasty who used to rule the sultanate of Delhi. He was one of India’s greatest kings and one of the world’s greatest military geniuses.

What is ‘Delhi’ famous?

Delhi is India’s capital for no petty reason. It is a special city, which has been home to prominent civilisations, dynasties and rulers.