Heat Produced On Combustion Of Fuels

Fuels release heat on burning: Heat of combustion is total amount of heat released when a fuel is burnt when there is complete combustion with oxygen. It is a chemical reaction in which hydrocarbon is burnt and it produces carbon dioxide, heat and water. The heat of combustion can be expressed as follows: energy/mole of fuel, energy/volume of the fuel. 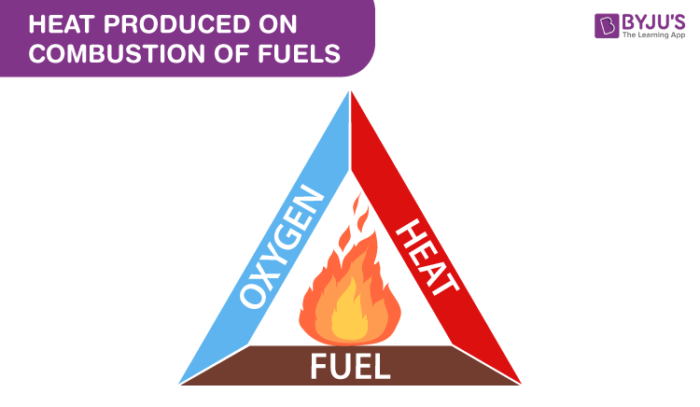 The amount of heat produced by a fuel is measured by calorimeter. Different amount of carbon dioxide is produced by different fuels; it is in relation with the energy produced on burning. Here is a list of some fuels and the amount of CO2 released in per million British thermal units (Btu).

Incomplete combustion produces many particulate matters which are very injurious for health and also makes the building dirty.

At high temperatures nitrogen and oxygen combine to form nitrogen oxides. These are very harmful for health and when it combines with rain it caused acid rain.

The amount released during the combustion of a specific amount of fuel is called its heating value and is very helpful in determining the heat produced by different fuels. For more queries contact BYJU’S mentors