Evaporation can generally be defined as a process by which a liquid is transformed into vapour.

When you spray perfume on your body, your body feels slightly cooler. The same goes for acetone and water. This is an effect of evaporation or the change of matter from its liquid state to its vapour state. The only difference is the rate at which the coolness is felt. In the case of acetone, the part of your body that is in contact with the liquid will cool the fastest. This happens because the evaporation rate of acetone is higher than that of water or perfume.

Evaporation is a form of vaporisation that usually happens on the surface of liquids and it involves the transition of the liquid particles into the gaseous phase. Therefore, this process is said to involve a change in the state of matter of liquids. The surrounding gas must not be saturated with the substance which is evaporating. They transfer energy to each other as the molecules of the liquid collide, depending on how they collide with each other. The liquid particles will generally escape and enter the surrounding air as a gas when a molecule near the surface consumes enough energy to overcome the vapour pressure. The energy extracted from the vaporised liquid as evaporation occurs will decrease the temperature of the liquid, resulting in a process known as evaporative cooling. 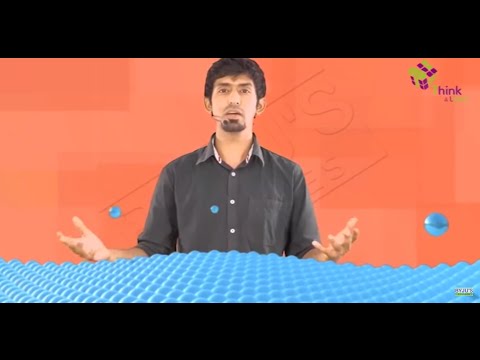 How does Evaporation Cause Cooling? 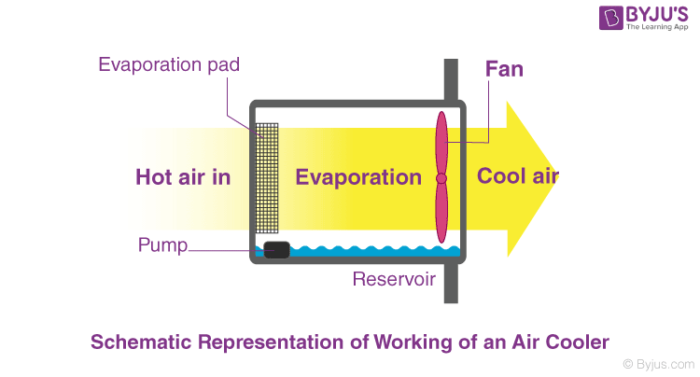 Schematic Representation of Working of an Air Cooler

This is the opposite of evaporation: a gas turns into a liquid and heat energy is lost in this process. An example of this can be the water droplets on the surface of a glass full of ice-cold water. When water vapour formed from evaporation comes in contact with the cold tumbler, it loses energy and gets converted to water.

What are the causes of evaporation?

When a liquid material becomes a gas, evaporation occurs. It evaporates as water is hot. The molecules move and vibrate so rapidly that they disperse as water vapour molecules into the atmosphere.

What are the steps of evaporation?

In the water cycle, there are four key phases. Evaporation, condensation, precipitation and collection are as they are. Let’s look at the steps of both of these. Evaporation: This is where the sun’s heating induces water to rise into the air from seas, lakes, streams, glaciers and soils, and transform into water vapour (gas).

How does evaporation become condensation?

At higher layers of the atmosphere, water molecules that have travelled upward by evaporation finally reach the colder air. Water vapour condenses in the humid, damp air, creating bigger droplets of water that will be visible as clouds gradually.

How can evaporation be prevented?

Cool the water down by holding it in the shade, adding ice or freezing with refrigerated pipes or restricting its exposure to sunlight. This reduces the kinetic energy that the water molecules have available, which slows down the rate of evaporation.

What are evaporation examples?

Evaporation is a form of vaporisation in which a liquid or solid is transformed into vapour. It involves a change in the state of matter.

What are the various factors that affect the rate of evaporation?

Evaporation is the process in which a liquid or solid is converted into vapour. Various factors that alter evaporation rate are surface area, temperature, humidity and wind speed.

Does temperature alter the evaporation rate?

How does humidity alter the rate of evaporation?

Is evaporation a physical change?

Yes, evaporation is a physical change as it involves only the change of state of water molecules and not its chemical composition.

To know more about the evaporation and condensation, the processes through which a change in the states of matter can be achieved, download BYJU’S – The Learning App.

Take up a quiz on Evaporation
Q5