Fe3O4 occurs as a mineral with a chemical name Iron (II, III) oxide. It is also known as Magnetite or Magnetic oxide. It is stone iron-like, brownish to grey or black in colour. It is not transparent and has a characteristic greasy or metallic lustre. 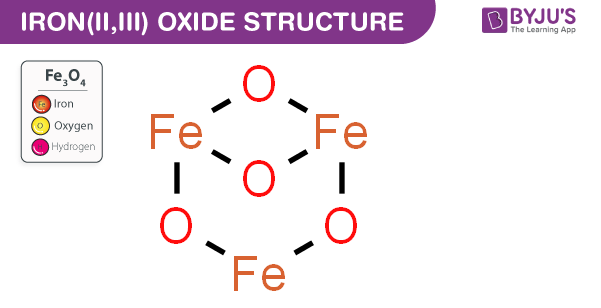 The above image describes the structure of the Iron (II, III) oxide. Fe3O4 is the chemical formula of Iron (II, III) oxide which has four oxygen atoms, and three iron atoms. The bond formation between iron and oxygen depends on the difference in electronegativity between them. Iron (Fe) is metal and oxygen(O2) is non-metal. The bond between them is called an Ionic bond.

Learn more about the chemical properties and importance of Fe3O4 from the expert faculties at BYJU’S.