What are Free Radicals?

A free radical is termed to the molecular kinds which can contain an unpaired electron in their atomic orbital and can exist independently.

All the radicals share some common properties due to the unpaired electron. 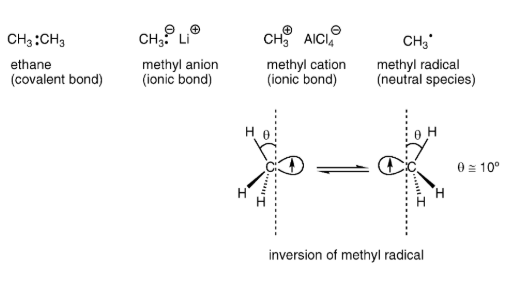 Ethane is composed of two methyl groups connected by a covalent bond and is a very stable compound. The methyl anion and methyl cation have an ionic bond mainly between carbons and counter ions respectively and are not particularly unstable though there are some rather moisture sensitive species.

Most organic radicals are quite unstable and very reactive. There are two kinds of radicals, neutral radicals and charged radicals as shown below.

Normally, pi radicals are stabilized by the hyperconjugation effect or the resonance effect. However, sigma radicals are very reactive because there is no such stabilizing effect.

Free radicals are generated internally through this following sources.

Free radicals are found externally in the following sources.

How do you get free radicals?

What is radical in chemistry example?

A radical is a chemical entity with an unpaired electron in it. A radical can be electrically neutral, radical cation charged positively, or radical anion charged negatively. The Radicals Examples. 1. In ultraviolet light the chlorine molecule Cl2 undergoes homolysis to form two radicals of Cl.

Is oxygen a free radical?

In the body, oxygen breaks up into single atoms of unpaired electrons. Electrons prefer to be in pairs, and these atoms, known as free radicals, scavenge the body to look for other electrons so that they can become a pair. This causes cells, proteins and DNA to become damaged.

What are the types of radicals?

Superoxide and hydroxyl radical are two essential oxygen dependent radicals. Under reducing conditions they originate from molecular oxygen. However, these same radicals can engage in unwanted side reactions resulting in cell damage due to their reactivity.

Where do free radicals come from?

Free radicals and other ROS are either derived from natural, essential metabolic processes in the human body or from external sources such as X-ray exposure, ozone, cigarette smoking, air pollution, and industrial chemical substances.

Why are free radicals so reactive?

Radicals are so reactive in that they need so much energy to shape. As we speak about radical reactivity, “more reactive” generally means a step towards more exothermic abstraction of the hydrogen atoms. That makes the reaction less prone to the carbon-centric radical’s stability.

How do free radicals affect the body?

Free radicals in the body cause similar degradation as they kill membranes of cells and make cells susceptible to decline and pathogens. Such free radicals destroy DNA and mitochondria, the fundamental building blocks of all tissues, and leave many health problems in their course.

What diseases do free radicals cause?

It is growing evidence that most of the degenerative diseases that afflict mankind derive from deleterious free radical reactions. Such disorders include atherosclerosis, cancer, inflammatory joint disease, asthma, diabetes, senile dementia and eye degeneration.

Take up a quiz on Free Radicals
Q5