What is Pauli Exclusion Principle?

The Pauli exclusion principle states that in a single atom no two electrons will have an identical set or the same quantum numbers (n, l, ml, and ms). To put it in simple terms, every electron should have or be in its own unique state (singlet state). There are two salient rules that the Pauli Exclusion Principle follows:

However, Pauli’s Exclusion Principle does not only apply to electrons. It applies to other particles of half-integer spin such as fermions. It is not relevant for particles with an integer spin such as bosons which have symmetric wave functions. Moreover, bosons can share or have the same quantum states, unlike fermions. As far as the nomenclature goes, fermions are named after the Fermi–Dirac statistical distribution that they follow. Bosons, on the other hand, get their name from the Bose-Einstein distribution function.

Formulation of the Principle

Wolfgang Pauli was also awarded the Nobel prize in the year 1945 for the discovery of the Pauli Exclusion principle and his overall contribution to the field of quantum mechanics. He was even nominated by Albert Einstein for the award.

In chemistry, the law is mainly used to explain or determine the electron shell structure of atoms and predict which atoms are likely to donate electrons. How does the principle work or where does it apply? Well, if we look at the atoms whenever it gains a new electron or electrons it usually moves to the lowest energy state or it shifts to the outermost shell. If the state has one electron then it can either be spin-up or spin down. Now, if we consider the Pauli exclusion principle if there are two electrons in a state, then each of the electrons will have spin-up or spin down-state but not the same.

We can take a neutral helium atom as a common Pauli Exclusion Principle example. The atom has 2 bound electrons and they occupy the outermost shell with opposite spins. Here, we will find that the two electrons are in the 1s subshell where n = 1, l = 0, and ml = 0.

Their spin moments will also be different. One will be ms = -1/2 and the other will be +1/2. If we draw a diagram then the subshell of the helium atom will be represented with 1 “up” electron and 1 “down” electron. In essence, 1s subshell will consist of two electrons, which have opposite spins.

Similarly, if we take Hydrogen it will have 1s subshell with 1 “up” electron (1s1). Lithium will have the helium core (1s2) and then one more “up” electron ( 2s1). What we are trying to depict here is that the electron configuration of the orbitals is written in this manner. 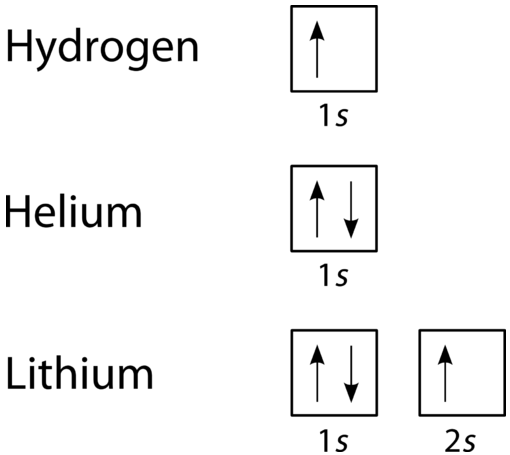 Formulation of the Pauli Exclusion Principle

The nuclei in an atom consist of neutrons and protons which are held together by the nuclear force. However, protons tend to repel each other via electromagnetic force as a result of their positive charge. Basically, these two forces are working against (competing) each other thereby leading to the stability of nuclei. Meanwhile, you will find only certain sets or combinations of protons and neutrons that form stable nuclei. The nucleus is mostly stabilized by the neutrons as attract each other and protons. This further helps counterbalance the electrical repulsion between protons. When this happens, the number of protons goes up. In essence, an increasing ratio of neutrons to protons is needed to form a stable nucleus.

In case if there are a larger number of (neutrons also obey the Pauli exclusion principle) or too few neutrons for a given number of protons, the nucleus of the atom is not stable. This will lead to radioactive decay. Meanwhile, Pauli’s exclusion principle also has an effect on the critical energy of fissile and fissionable nuclei. For example, if we look at actinides that have an odd neutron number they are usually fissile or in other words fissionable with slow neutrons. On the other hand, actinides that have even neutron number they are usually not fissile or we can say that are fissionable with fast neutrons. Similarly, due to the Pauli exclusion principle, heavy nuclei with an even number of protons and neutrons are very stable due to the presence of ‘paired spin’. Alternatively, nuclei with an odd number are unstable.

Here we have summarized and listed out some important points from the lesson. Students should keep these points in mind while studying this topic.

What are the four sets of quantum numbers, and what is their significance?

What should be the orientation of electrons in the same orbital according to Pauli Exclusion Principle?

The electrons should be antiparallel to each other. If one electron has an upward spin, the other electron should have a downward spin in the same orbital.