Elementary Idea on Hormones and its Functioning 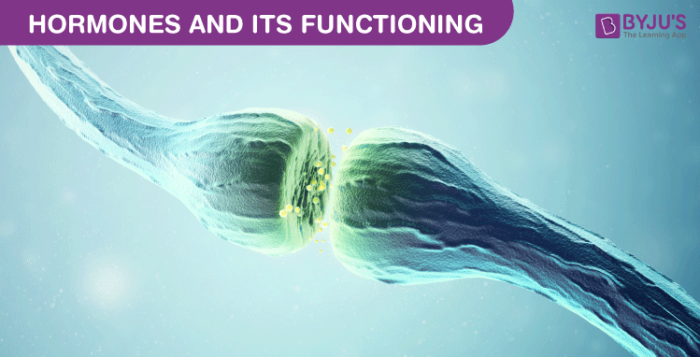 Hormones are compounds that are also known as signalling molecules. They are produced by the glands in multi-cellular organisms. Hormones are transported by the circulatory system to target distant organs in order to regulate the physiology and behaviour in living beings. A hormone is actually a chemical messenger which is directly secreted into the bloodstream. Blood carries these hormones to various organs and tissues to exert their function.

Hormones act on different aspects of body functions and processes such as:

Secretion of hormones is controlled by the endocrine system of the body. The endocrine system is ductless hence the hormones are directly secreted into the blood rather than ducts. The major endocrine glands in the body include the pituitary gland, pineal gland, thymus, thyroid, pancreas, testes, and ovaries. These organs actually secrete a very small amount of it but even this small amount is sufficient to bring about a significant visible change in the human body.

Hormonal imbalance causes diseases, it can result in a case of excess or deficiency of any hormone. Hence a proper balance is to be maintained for a healthy body.

Hormonal disorders are a result of hormonal imbalance. These disorders are diagnosed in laboratories and by clinical appearance and features. Body fluids such as blood, urine, and saliva are tested to check for any hormonal abnormalities. In case a person is suffering from a hormonal deficiency, synthetic hormone therapy can be used to restore the balance. Whereas for cases in which there is an excess production of hormones, medication is prescribed to curb the effect and sustain normal functioning.

This article gives a fair idea about hormones and its effect on the body. For more on the types of hormones and their functions, register with BYJU’S now!