Rusting of iron refers to the formation of rust, a mixture of iron oxides, on the surface of iron objects or structures. This rust is formed from a redox reaction between oxygen and iron in an environment containing water (such as air containing high levels of moisture). The rusting of iron is characterized by the formation of a layer of a red, flaky substance that easily crumbles into a powder. 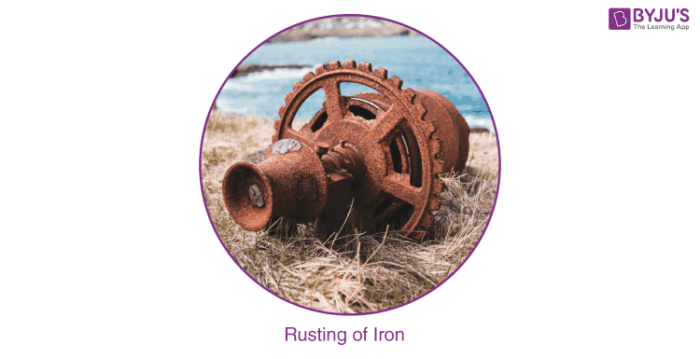 This phenomenon is a great example of the corrosion of metals, where the surfaces of metals are degraded into more chemically stable oxides. However, the term ‘rusting’ is generally used to refer to the corrosion of objects made of iron or iron-alloys.

What is the Chemistry Behind the Rusting of Iron?

The exposure of iron (or an alloy of iron) to oxygen in the presence of moisture leads to the formation of rust. This reaction is not instantaneous, it generally proceeds over a considerably large time frame. The oxygen atoms bond with iron atoms, resulting in the formation of iron oxides. This weakens the bonds between the iron atoms in the object/structure.

Oxygen is a very good oxidizing agent whereas iron is a reducing agent. Therefore, the iron atom readily gives up electrons when exposed to oxygen. The chemical reaction is given by:

The oxidation state of iron is further increased by the oxygen atom when water is present.

Now, the following acid-base reactions occur between the iron cations and the water molecules.

The hydroxides of iron are also formed from the direct reaction between the iron cations and hydroxide ions.

The resulting hydroxides of iron now undergo dehydration to yield the iron oxides that constitute rust. This process involves many chemical reactions, some of which are listed below.

One similarity between all the chemical reactions listed above is that all of them are dependent on the presence of water and oxygen. Therefore, the rusting of iron can be controlled by limiting the amount of oxygen and water surrounding the metal.

Why is Rusting an Undesirable Phenomenon?

Rusting causes iron to become flaky and weak, degrading its strength, appearance and permeability. Rusted iron does not hold the desirable properties of iron. The rusting of iron can lead to damage to automobiles, railings, grills, and many other iron structures.

The collapse of the Silver Bridge in 1967 and the Mianus River bridge in 1983 is attributed to the corrosion of the steel/iron components of the bridge. Many buildings made up of reinforced concrete also undergo structural failures over long periods of time due to rusting.

Rusted iron can be a breeding ground for bacteria that cause tetanus. Cuts from these objects that pierce the skin can be dangerous.

Since rusting occurs at an accelerated rate in humid conditions, the insides of water pipes and tanks are susceptible to it. This causes the pipes to carry brown or black water containing an unsafe amount of iron oxides.

Factors that Affect the Rusting of Iron

Many factors speed up the rusting of iron, such as the moisture content in the environment and the pH of the surrounding area. Some of these factors are listed below.

How can Rusting be Prevented?

Iron and its alloys are widely used in the construction of many structures and in many machines and objects. Therefore, the prevention of the corrosion of iron is very important. Some preventive methods are listed below.

Alloys that are Resistant to Rusting

Some alloys of iron are rust-resistant. Examples include stainless steel (which features a layer of chromium(III) oxide) and weathering steel.

COR-TEN steel rusts at a relatively slower rate when compared to normal steel. In this alloy, the rust forms a protective layer on the surface of the alloy, preventing further corrosion.

Smaller objects are coated with water-displacing oils that prevent the rusting of the object. Many industrial machines and tools made of iron are coated with a layer of grease, which lubricates the metal to reduce friction and prevents rusting at the same time.

To learn more about the rusting of iron and other related concepts, such as the corrosion of metals, register with BYJU’S and download the mobile application on your smartphone.

What are physical and chemical changes?

What defines a chemical change?

Chemical reactions requiring the rearrangement of atoms of one or more compounds and the modification of their chemical properties or structure resulting in the creation of at least one new substance: iron rust is a chemical alteration.

Is Melting zinc a chemical change?

Which process is a chemical change?

What is the importance of chemical change?

Chemical processes allow one to understand matter’s properties. We can learn its chemical properties by observing the way a sample interacts with another matter. These properties may be used to classify an unknown specimen or to predict how different kinds of matter may react with each other.

Take up a quiz on Rusting of Iron
Q5