The Schotten Baumann reaction can also refer to the benzoylation of active hydrogen-containing compounds with the help of benzyl chloride and aqueous sodium hydroxide. Pyridine can also be used as an alternative to the sodium hydroxide base.

This reaction can be generalized as follows.

Some key features of the Schotten Baumann Reaction are:

The ‘Schotten Baumann conditions’ maintained in this reaction refer to the aqueous basic environment which is biphasic in nature.

The mechanism of this reaction can be broken down into three steps in order to easily understand it. These steps are:

The formation of a protonated compound from the reaction between the acyl chloride and the amine. First, the nitrogen atom puts forth a lone pair of electrons towards the formation of a carbon-nitrogen bond

The positive and negative charges on the nitrogen and oxygen atoms are neutralized by the exchange of a proton between them.

The catalyst of the reaction (i.e. the base) proceeds to absorb the acidic proton which is formed when oxygen attempts to reform a double bond with the carbonyl carbon (which is favorable as the electronegative chlorine atom can easily break its bond with carbon and be liberated as a chloride ion).

In the final step of the Schotten Baumann reaction mechanism, the required amide product is formed along with hydrochloric acid now that the base catalyst has absorbed the acidic proton. This HCl is neutralized by the base catalyst as well. 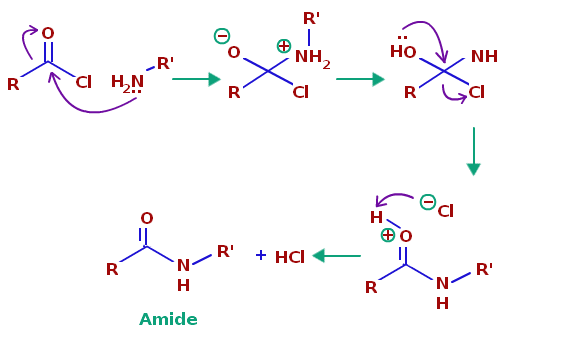 The entire mechanism of the Schotten Baumann Reaction is illustrated above.

Some important applications of this reaction are listed below.

Thus, it can be noted that the Schotten Baumann reaction is a very important named reaction in organic chemistry, having numerous applications.