In the example given above – R1 and R3 = aryl, alkene(vinyl) or alkyne

Merits of the Suzuki Coupling Reaction

This reaction is commonly used in the synthesis of substituted biphenyls, poly-olefins, and styrenes. Boronic acids are commonly available. They are also less toxic and environment-friendly when compared to organostannane and organozinc compounds. The reaction conditions of the Suzuki coupling reaction are relatively mild. Due to these reasons, the Suzuki coupling method is preferred over other similar coupling reactions. Furthermore, the reagents used in this reaction can be easily prepared and are relatively cheap.

The Suzuki coupling mechanism follows a catalytic cycle involving three primary steps, namely – oxidative addition, transmetalation, and reductive elimination. Each of these steps have been elaborated below. 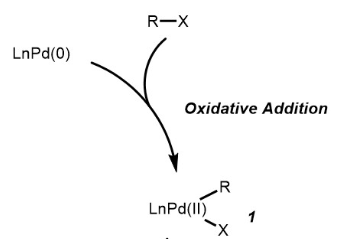 Now, the palladium(II) complex proceeds to eliminate the required product and is converted into the palladium(0) form. Thus, the catalyst is regenerated and the catalytic cycle is ended. This step can be illustrated as:

Combining the three steps in the given order, the complete catalytic cycle can be represented as: Thus, the required coupling of the boronic acid with the organohalide is achieved and the carbon-carbon single bond is formed.