Tests for Aldehydes and Ketones

Aldehydes and ketones constitute an important class of organic compounds containing the carbonyl group. Aldehyde has the structure RCH(=O) while a ketone has the structure of R2C(=O), where R may be an alkyl, alkenyl, alkynyl or aryl group.

To identify the presence of aldehydes or ketones functional group in the given organic compound.

The following tests are used to identify the presence of aldehydes and ketones.

Aldehydes and ketones react with 2,4-dinitrophenylhydrazine to give an orange-yellow precipitate.

Aldehydes and ketones combine with sodium bisulphite to for well-crystallized water-soluble products known as “aldehyde bisulphite” and “ketone bisulphite”.

Distinguishing Tests between Aldehydes and Ketones:

Schiff’s reagent is prepared by passing sulphur dioxide into a solution of the dye fuchsin. The solution becomes colourless due to the formation of an additional product. Aldehydes abstract sulphurous acid from Schiff’s reagent and restore the pink colour. The colouration is due to the formation of complex compound. Ketones, in general, do not respond to this reaction.

Aromatic aldehydes do not respond to Fehling’s test. An aqueous solution of the compound may be used instead of an alcoholic solution. Formic acid also gives this test.

Note: The appearance of red precipitate confirms the presence of an aldehydic group.

This test is also called the silver mirror test. Tollens reagent consists of silver ammonia complex in ammonia solution. Aldehydes react with Tollens reagent giving a grey-black precipitate or a silver mirror. Always a freshly prepared Tollen’s reagent should be used. Aldehydes are oxidised to the corresponding acids, and silver in Tollens reagent is reduced from +1 oxidation state to its elemental form. Generally, ketones do not respond to this test.

Note: The appearance of a shiny silver mirror confirms the presence of aldehydes.

Note: The appearance of green or blue colour precipitate confirms the presence of aldehydes.

Note: The appearance of red colouration shows the presence of ketone. 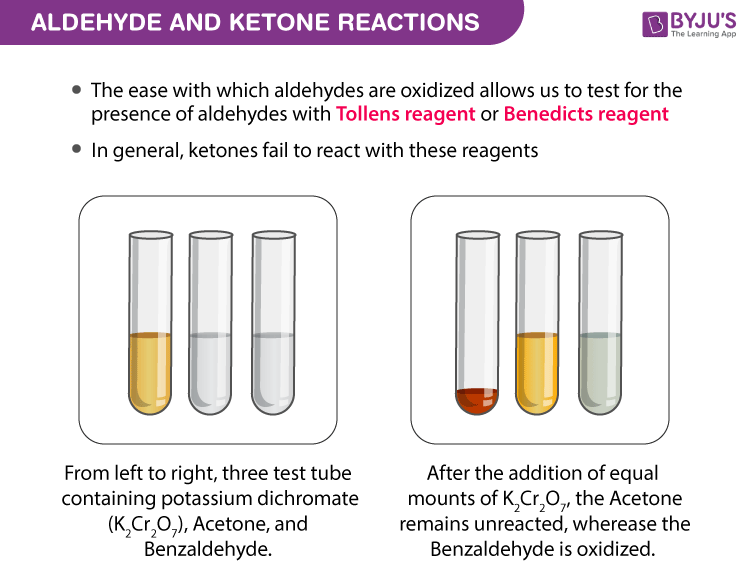 Procedure for test of aldehydes and ketones:

The given organic compound has ___________ (aldehyde/ketone) functional group.

Frequently Asked Questions on Tests for Aldehydes and Ketones

Name any one test to distinguish aldehyde from ketone.

Tollens ‘ test is a qualitative laboratory test used to distinguish between an aldehyde and a ketone, also known as a silver-mirror test. It takes advantage of the fact that aldehydes are oxidized readily, while ketones are not.

What is the use of Schiff’s reagent?

Schiff’s reagent is used to distinguish aldehydes and ketones.

What is Rochelle’s salt?

Test Your Knowledge On Tests For Aldehydes And Ketones!
Q5