Periodic Table Trends On The Properties Of Elements 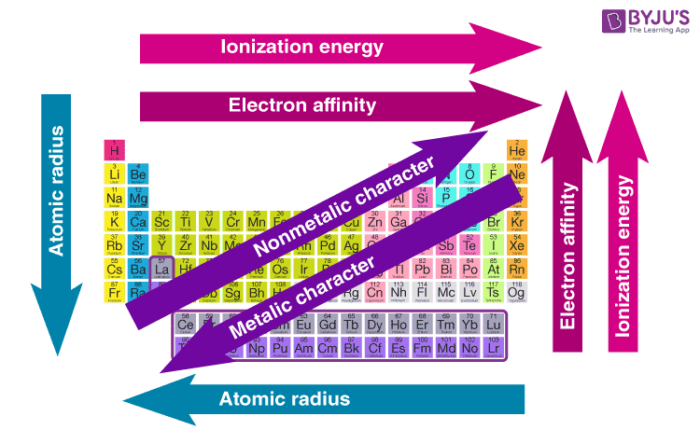 The following trend in periodic properties of elements is observed:

The distance between the centre of the nucleus and the outermost shell of an atom is known as the atomic radius. In a group the atomic size increases due to the addition of shells as we move from one period to another. Across a period the atomic size decreases as the number of shells remain the same while the nuclear charge increases. This leads to the pulling of electrons from the outermost shell towards the nucleus thereby decreasing the size.

The elements which lose electrons to form cations are known as metals. Metallic character increases as we move down the group because the atomic size increases which lead to easy loss of electrons. On the other hand, it decreases across a period as we move from left to right. This happens because there is an increase in nuclear charge which makes it difficult for an atom to lose electrons.

The melting point of an element is basically the energy required to change the state of an element from its solid state to its liquid state. Which essentially implies breaking a few bonds. Thus, higher the stronger the bond between the atoms, the higher will be the melting point. Let us look at the elements in the ascending order of their melting points.

Just like how the strength of the bonds between atoms affect the Melting Point, the boiling point depends on the heat energy required to create a transition from liquid to gaseous state. Have a look at this table with the elements of the periodic table arranged in order of increasing boiling points.

So we have discussed the trends of periodic properties followed by the elements of the modern periodic table. Click here to explore the world of Chemistry on BYJU’S.

Test Your Knowledge On Trends In Periodic Properties!
Q5