UPSC Exam Preparation-Gist of Yojana Sept 2017 Issue: Housing for All

YOJANA- September 2017: HOUSING FOR ALL

Cities are engines of growth and innovation. Urban Indian now form one-third of the population and they produce more than three-fifth of GDP.  Housing is an important sector for the Indian economy as it has linkages with about 269 other industries. Development of the housing sector has a direct impact on employment generation, growth of Gross Domestic Product (GDP) and consumption pattern in the economy. The public housing programme in the country started with the rehabilitation of refugees immediately after the independence and since then, it has been a major focus area of the government as an instrument of poverty alleviation.

Housing for All Mission:

The central government has identified 305 cities and towns under the Housing for All Mission, also called the Pradhan Mantri Awas Yojana, which targets to build 2 crore homes for urban poor by the year 2022.

PMAY-U was launched in 2015 to provide housing for all by 2022. The scheme provides central assistance to Urban Local Bodies (ULBs) and other implementing agencies through States/UTs. The programme has 4 verticals

In the spirit of cooperative federalism, the mission has provided flexibility to states for choosing the best option amongst the four verticals of the mission to meet the demand of housing in their states. It has introduced a built-in flexibility, demand-driven approach and comprehensive Housing for All Plan of Action for all of the ULBs. 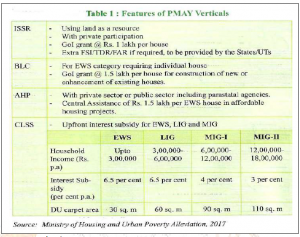 The government has also taken various policy measures to address the challenges of affordable housing:

The integration of urban schemes help the cities to upgrade themselves faster in terms of meeting the housing demand equipped with necessary infrastructure, both social and physical.

The linkages between Land Acquisition, Rehabilitation and Resettlement (LARR) and Housing for All (HFA) assume significance primarily in the context of scarcity of land for planned development and the overwhelming shortage of adequate, affordable housing in India.

LARR cannot just be used as a cynical measure to relocate low-income urban population to peripheral areas transitioning from rural to urban, it would mean that a larger question of how to ensure higher occupancy rates or ensure planned rural, urban and urban development, would remain unaddressed.  ‘Viability’ thus exceeds just the policy attention to cost or benefits. For low- income groups, three aspects of what constitutes Viability are imperative:

The critical question therefore is not just how to use LARR Act to ensure redevelopment for affordable housing in urban areas but rather, how to meet the target of Housing for All, using land acquisition or pooling (as feasible) on the one hand, but also multiple other strategies such as in situ up-gradation, credit-linked subsidy, enabling beneficiary led house enhancement and so on. This involves looking at both rural and urban areas as a continuum.

Under the LARR Act, it is possible to carry out Eminent Domain type land acquisition to ensure affordable, adequate housing for all in rural as well as urban areas.

Many states have sought to compensate for these shortcomings by widening their own state housing policies with different and more diverse approaches.

To develop housing in the country, there is a need to have well-developed housing finance market. The outstanding amount of housing finance accounts for around 8% of GDP in India as compared with 12 % in China, 29% in Malaysia, 46% in Spain and 80% in the US.

The housing finance market is expected to increase with urbanization. The government is assisted by two regulators, RBI and the National Housing Bank (NHB). RBI regulates

In India, there is a gap in the housing finance market which is being addressed mainly by the Central Government.

The bill will bring much-needed transparency in the sector. RERA is an effort by the legislature to regulate the unregulated but important Real Estate Sector of India which not only contributes significantly to GDP but also provides employment to many.

Better housing enhances the quality of life of the residents and leads to higher productivity as well as income-generating capabilities. Therefore the affordable housing design should aim to provide a healthy and comfortable environment for the residents. It is of vital importance to build houses that minimize the use of energy, water and mineral resources during their life cycle.

The design philosophy of affordable housing should incorporate key performance metrics such as indoor air quality, thermal comfort and energy performance index. Affordability should be determined based on the entire life cycle costs. The housing design must also incorporate climate responsive design and encourage the use of local building materials for construction.

Energy-efficient buildings are typically designed using either of the two approaches:

Prescriptive approach is the most suitable approach for affordable housing design and construction.

External shading devices can be a cost-effective approach for affordable housing to reduce direct solar radiation and heat gain for the windows. Well designed ventilation can also use outdoor air to provide cooling whenever the environmental conditions are favourable.

In extreme climatic conditions, low energy cooling technologies are required in the affordable housing design to keep the residents thermally comfortable and healthy. Evaporative cooling is one of the cost-effective technologies. Integration of solar water heating and lighting can significantly reduce the energy consumption. Energy Management System (EMS) is a very effective measure of energy use of affordable housing. EMS can lead to energy savings and provide necessary energy benchmarks information for the future design of affordable housing.

These good quality affordable housing with green technologies can play a significant role in securing the well-being and economic growth of the country.

Housing the Poor in Smart Cities

Smart Cities Mission (SCM) is a fast track mission mode urban scheme. The launch of two more schemes AMRUT and PMAY addresses some of the other pressing needs of Indian cities like improved quality of services, improved governance and provision for housing.

The SCM guidelines state that its objective is to promote cities that provide core infrastructure and give a decent quality of life to its citizens, a clean and sustainable environment with the application of smart solutions. The Smart Cities focus on “sustainable and inclusive development” and on creating replicable models that will inspire other cities to transform.

The Smart Cities Plan (SCP) consists of an Area Based Development (ABD) plan and a pan-city plan. The ABD aims at transforming a specific area within the city by improving its design, infrastructure, mobility etc. the pan-city plan focuses on improving city governance/ management mainly through the use of smart technology solutions.

Both SCM and AMRUT are expected to have convergence with the mission on Housing for All. In the housing sector, the Smart Cities plans have proposed projects for in-situ slum rehabilitation, slum redevelopment, affordable housing for EWS and LIG, rental housing etc.

There are certain challenges in achieving the goals of housing for poor:

Infrastructure Requirements for Housing for All

Major challenges faced in housing and urban infrastructure are:

Corrective steps to be taken: