The Broad Objectives of the initiative are 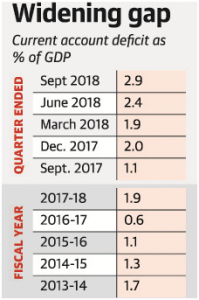 The foreign investment is under capital account but dividends and income from investment comes under current account in the category income from abroad as dividend is transferred periodically, does not result in creation of asset or liability. 1. An invitation to corruption? (The Electoral Bond Scheme)

What are Electoral Bonds?

In the whole process there are three important stakeholders:

Political Party: Till now the political parties were supposed to maintain the records of all the donors who donated above Rs 20000 through cheque. As a result it was observed that there were large number donations with a value lesser than Rs 20000. Hence the government has brought down the limit to Rs 2000.

Brief Note on the the in-built security features of the Electoral Bonds:

Importance of the Electoral Bonds

A Case In Point:

A Look at the Draconian Criminal Tribes Act (CTA) of 1871

A Look at the Present Situation

1. Mechanism to allow cultivation of GM crops in India

India is the first country in world to develop such a document on ICAP, which addresses cooling requirement across sectors and lists out actions which can help reduce the cooling demand.  Ministry of Environment and Forest Climate Change (MoEFCC) has released the draft India Cooling Action Plan (ICAP).

‘e-Sahaj’ portal was launched recently to facilitate individuals and private companies in seeking security clearance for setting up businesses in certain sensitive sector.

The Home Ministry is the nodal authority for granting security clearances in certain sensitive sectors before license, permit, permission, contract etc is issued to companies, bidders, individuals by the administrative ministry.

The objective of national security clearance is to evaluate potential security threats, including economic threats, and provide risk assessment before clearing investment and project proposals in key sectors.