1. Unregulated deposit schemes to be banned

Provisions of the Banning of Unregulated Deposit Schemes Bill, 2018

1. State of the Union (SOTU) Address This article presents the gist of points discussed in two articles that featured in the Hindu on the 7th of February, 2019, namely, “Tough-talking” and “Talks with Taliban”.

Recent Talks with the Taliban:

What should India do?

A Look at the Scheme:

Whom does it include?

What will the government spend?

Will the scheme work?

2. SC may curb advocates from speaking on cases

What is the GSAT-31 communication satellite?

What purpose will it be used for?

From where was it launched? 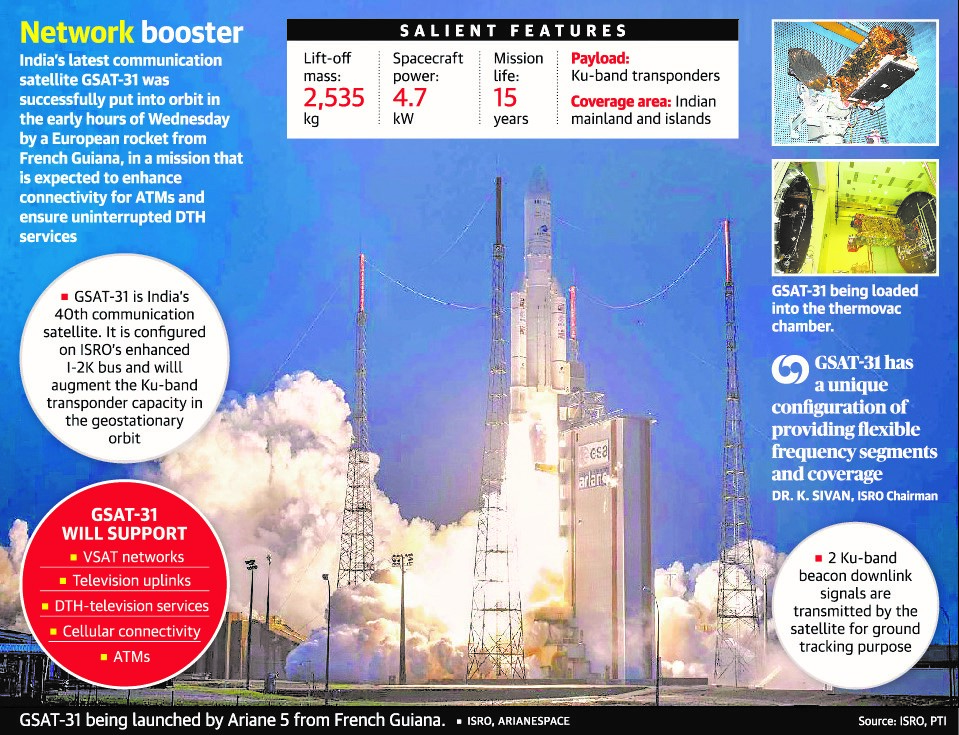 CSWF was established in the 1950s. The Centre brought in Senior Citizens’Welfare Fund Act, 2015 (SCWF) as part of the Finance Act, 2015, which mandates transfer of unclaimed amounts of policyholders to the fund (SCWF) after a period of 10 years. The fund will be administered by an Inter-Ministerial Committee, headed by a Chairperson. The Committee will be competent to spend money from the fund for satisfying various objectives. The accounts of the fund will be open to audit by CAG, regularly. The Central Government will present the annual report and the one furnished by CAG to be laid before the Parliament.

Securities and Exchange Board of India (SEBI) and Exchanges in order to enhance market integrity and safeguard interest of investors, have introduced Graded Surveillance Measures (GSM) wherein certain identified securities shall be subjected to enhanced monitoring and surveillance actions. The main objective of these measures is to – alert and advice investors to be extra cautious while dealing in these securities and advice market participants to carry out necessary due diligence while dealing in these securities.

Coral reefs are the skeletons of stony coral polyps cemented together. It is a diverse underwater ecosystem held together by calcium carbonate structures secreted by corals. The four major coral reefs areas identified for intensive conservation and management in India since 1987 are: i) Gulf of Mannar, (ii) Gulf of Kutch; (iii) Lakshadweep; and iv) Andaman and Nicobar Islands. The environment forest and climate change ministry provides financial assistance to the state forest departments for all the four identified coral reef areas for conservation and management of coral and associates. Besides, this ministry also supports R&D activities with emphasis on targeted research on coral biodiversity, its management and various aspects of pollution in these areas.