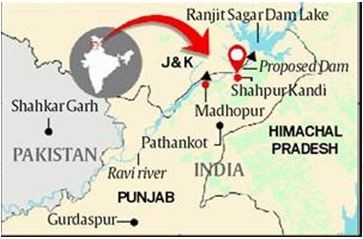 What were the Supreme Court’s directions? The Central Armed Police Forces (CAPF) refers to uniform nomenclature of five security forces in India under the authority of Ministry of Home Affairs. They are:

Only officers in the rank of inspectors and above enjoyed this facility, but from now on all personnel in the ranks of constable, head constable and assistant sub-inspectors will be eligible.

Highlights of the UNSC Statement

3. Assam Rifles granted power to arrest anyone in the Northeast

The Assam Rifles Act, 1941, presently governs the Force. Its charter of functions include –

Defence and energy needs: A Perspective

Steps taken to ensure the safety of Kashmiri Students:

Perspective of Initiatives Taken by the Government to help Kashmiri Students:

2. SC to hear plea for protection to Kashmiris from attacks

1. ‘ILP will be applicable to entire Nagaland, including Dimapur’

1. The Indus Waters Treaty is a trilateral agreement between India, Pakistan and China.
2. The World Bank brokered the Indus valley treaty.
Choose the incorrect statements.
a) 1 only
b) 2 only
c) Both 1 and 2
d) Neither 1 nor 2

Ans: a
Explanation: Though, the Indus originates from Tibet, China has been kept out of the Treaty. The provisions of The Indus Valley Treaty created a peaceful sharing of water among India and Pakistan for 56 years on sharing the water of Indus and its tributaries.

Answer – a
Explanation: The Ministry of Women and Child Development is implementing the Swadhar Greh Scheme which targets the women victims of difficult circumstances who are in need of institutional support for rehabilitation so that they could lead their life with dignity. The Scheme envisages providing shelter, food, clothing and health as well as economic and social security for these women.

1. Globally, the unemployment rate among women is higher than that of men
2. Increase in higher education enrolment among women is considered one of the reasons for fall in Female Labour Force Participation Rate
Which of the above statement(s) is/ are correct?
(a) Only 1
(b) Only 2
(c) Both 1 and 2
(d) None of the above

Answer – c
Explanation: Globally, the unemployment rate for women stands at 6.2% in 2017, higher than the male unemployment rate of 5.5 per cent.
According to some research, one plausible explanation for the recent drop in FLFP is that with the recent expansion of secondary education, as well as rapidly changing social norms in India, more working age young females (15 to 24 years) are opting to continue their education rather than join the labour force early.

1. India ranked at 108 on the World Economic Forum’s “Global Gender Gap Report 2018”
2. There is no constitutional provision in India for gender wage parity
3. In Grih Kalyan Kendra vs. Union of India- Supreme Court held that the principle of “equal pay for equal work” as a constitutional goal
Which of the above statement(s) is/ are correct?
(a) Only 1 and 2
(b) Only 2
(c) Only 3
(d) Only 1 and 3

Answer – d
Explanation: Article 39 (d) under DPSP: According to it, the state shall, in particular, direct the policy towards securing that there is equal pay for equal work for both men and women. In Grih Kalyan Kendra vs. Union of India- SC held that the principle of “equal pay for equal work” as a constitutional goal and, therefore, capable of enforcement under article 32 of the constitution.
Equal Remuneration Act of 1976- aims to provide equal remuneration to men and women workers and to prevent discrimination on the basis of gender in all matters relating to employment and employment opportunities.