1. ‘What action can you take against political parties?’ Details of the attack

What does a non-military preemptive strike mean? Why Balakot is a watershed?

1. The new order in West Asia (Geopolitics of Saudi Arabia, Iran and Turkey)

Power Centres in the Arab Region: A Perspective

The reign of the Saudis: A Perspective

The Geopolitical Dynamics in a Multipolar region:

On 14 February 2019, a suicide terror attack was conducted by a Pak based terrorist organization Jaish-e-Mohammad, leading to the martyrdom of 40 brave jawans of the CRPF. JeM has been active in Pakistan for the last two decades, and is led by MASOOD AZHAR with its headquarters in Bahawalpur.

Has the JeM been set back?

1. Declaring 5 year I-T returns a must for poll candidates

2. Assam to cut pay of staff who neglects parents

1. ‘Angkor did not suffer a sudden collapse’ 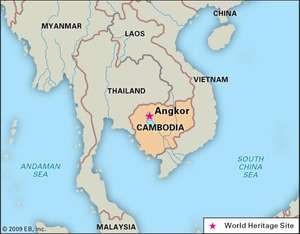 ‘Sukanya Samriddhi Yojna’ is a small deposit scheme for girl child, launched as a part of the ‘Beti Bachao Beti Padhao’ campaign, which would fetch an attractive interest rate and provide income tax rebate. ‘Sukanya Samriddhi Account’ can be opened at any time from the birth of a girl child till she attains the age of 10 years, with a minimum deposit of Rs 250. A maximum of Rs 1.5 lakh can be deposited during a financial year.

The Integrated Child Development Service (ICDS) Scheme providing for supplementary nutrition, immunization and pre-school education to the children is a popular flagship programme of the government.

The ICDS Scheme offers a package of six services, viz.

Three of the six services viz. immunization, health check-up and referral services are related to health and are provided through National Health Mission and Public Health Infrastructure. The services are offered at Anganwadi Centres through Anganwadi Workers (AWWs) and Anganwadi Helpers (AWHS) at grassroots level.

Janani Suraksha Yojana (JSY) is a safe motherhood intervention under the National Health Mission (NHM). All pregnant women belonging to the Below Poverty Line (BPL) households and ST category. Under the JSY, eligible pregnant women are entitled for cash assistance irrespective of the age of mother and number of children for giving birth in a government or accredited private health facility.