Sustainable and renewable energy sources are a crucial strategic national resource. Creating environment friendly development programmes is one of the most challenging tasks. Harnessing sustainable energy resources becomes important while planning for energy programmes. And hence, meeting the nation’s energy requirements is high on the agenda of any government. Renewable energy sources contribute to a nation’s sustainable growth trajectory, in addition to protecting the environment, promoting investment and conserving ecology.

Other more well-known energy sources, like solar and wind energy are in use in some parts of the country. But financing renewable sources is a major issue. Financial assistance in the form of low-interest rate, long-term loan guarantees are some available means of addressing the high capital costs of creating renewable energy sources. As on date, India is heavily dependent on imported oil and gas as well as coal to meet its energy requirements. But concerted efforts are on, at the same time, to harness renewable energy sources and so that India is able to honour its commitments as per the Paris Accord on Climate Change.

Chapter 2: Energy Efficiency is the Key for Sustainable Development

Increase in the energy consumption in India:

It is a regulatory instrument to reduce specific energy consumption in energy intensive industries, with an associated market based mechanism to enhance the cost effectiveness through certification of excess energy saving which can be traded.

In this context, BEE has two programs:

For India, the success of the renewable energy sector will be crucial to meet its Nationally Determined Contribution (NDC) under the Paris Agreement and its transition towards a sustainable future.

The steps taken by the government to support the renewable energy sector:

Financial assistance in the form of low-interest rate, long-term loans and loan guarantees are globally accepted means to address the high up-front capital costs of renewables. In this context, arranging institutional finance for increased renewables deployment would require concerted efforts. Gearing up the banking sector, exploring international funding, and developing a suitable mechanism for risk mitigation or sharing by addressing both technical and financial bottlenecks is a challenge.

The major areas for action are:

Given right instruments put in place, there is no dearth of funds for renewables investment. India has put in place several progressive policies, both at federal and state level. However, financing challenges are bound to continue given the ambitious targets and requirement of patient capital. India has rightly been exploring a combination or short and long-term policy solutions. New ways of financing renewables including through credit and risk guarantees, innovative currency hedging facilities, government bonds etc would help in attracting additional capital, lowering the cost of debt, and also ensuring that India achieves its renewable energy targets.

The needs of India’s burgeoning population are rising. However, the status quo of resources might not be adequate to fulfill the growing demands of a fast-paced economy. Country’s per capita consumption of electricity stands at a meagre 1.100 kWh/year which is much lower compared to other large economies like the US and China. Demand for power is set to rise further with increasing rates of urbanization and industrial growth. Plugging this demand-supply gap by augmenting capacity in the power sector is a key priority for the policy makers. Unfortunately, our traditional sources of energy generation are already nearing their saturation levels. India must also honour its global commitments on curbing greenhouse gas emissions as per the Paris.

Here are five areas that need more attention and focus, to take the Indian solar power industry to the next level:

Achieving the ambitious target of 100 GW solar power capacity by 2022 need an effort from all the stakeholders, including the central and state governments’ financers, discoms and private players. The government has a key role to play — not only by providing the required policy support but also acting as a central coordinator— guiding and synchronising efforts from various stakeholders to catalyze the solar industry’s growth.

Keeping in view the commitment for a healthy planet and as per India’s Nationally Determined Contributions made in the Paris Accord on Climate Change, India has made a pledge that by 2030, 40 per cent of installed power generation capacity shall be based on clean energy sources. Accordingly, an ambitious target has been set of installing 175 GW of renewable energy capacity by 2022. This includes 100 GW from solar, 60 GW from wind, 10 GW from bio- power and 5 GW from small hydro power. The possibility of venturing into new emerging renewable energy technologies, such as Floating Solar, Offshore wind, solar wind hybrid, energy storage, etc is also being explored. However, renewable energy technologies such as geo-thermal and ocean energy still remain at a nascent stage in India. 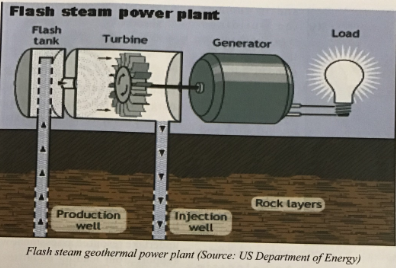 3. Binary Cycle Plants which use moderate-temperature water (107 to 182 degree Celsius) from the geothermal reservoir.

India generates about 1,45,128 tonne of waste daily (or around 53 million tonne annually) and on an average 46 cent of it is processed daily, according to the Ministry of New and Renewable Energy (MNRE). For a country like India that is heavily dependent on expensive imported oil and gas imports as well as coal for meeting its energy requirements, it definitely makes more sense to look at alternative resources. And this is where the Waste to Energy programme propagated to recover energy in the form of Biogas/ BioCNG/ Power from urban, industrial and agricultural wastes gains importance. Besides, it also promotes off-grid connectivity.

While solar and wind have developed a glam quotient, they can only be intermittent to coal or other fossil fuel. Biogas could work in the favour of India. However, there are challenges like CBG quality and marketing. Biogas cannot succeed without governmental support as it is still at a very nascent stage. But once it takes off, the government can play the role of a facilitator and allow private sector to run the business.

Chapter 8: Driving a Green Transition for the Environment

Electric mobility is the definitive game-changer for the transport sector the world over, with global penetration growing at close to 75% per year.

India has its own vision for electric mobility:

Going electric for the environment:

A fossil-fueI powered mobility ecosystem, is environmentally unsustainable, due to a variety of reasons.

What about emissions from an electric mobility future?

How is India enabling the electric transition?

India’s HDI is 0.64, placing it at a rank of 130 among 189 countries. Despite being one of the fastest growing economies of the world, nearly 12 % of the households still do not have access to basic services like clean water and 52% of the households live in mud or semi- concrete houses. Even in 2011/12, 52 % households used firewood for cooking.

The world would require rapid and far reaching transitions at the global as well as national levels. Therefore it is clear that while rapid and inclusive development is clearly an overriding priority for the country on one hand, the global responsibility and pressure on India to grow sustainably is also significant as the urgency to address climate change issues is assuming increasing importance globally.

Given the global urgency to tackle climate change, following the Paris Agreement in 2015, India had set out its Nationally Determined Contribution (NDC) targets for 2030, which broadly have three main targets,

On the one hand, India’s energy transition story needs to address the technology development perspective which calls for enhanced and accelerated efforts to increase the uptake of clean and efficient energy substitutes, processes, and end-use equipment, such that the country does not lock itself into large stocks of inefficient equipment and infrastructure. At the same time, India needs to address the social development perspective wherein it needs to enable a higher standard of living for all the citizens by growing at a relatively higher pace and in a more inclusive way, ensure access to clean and modern energy forms in a reliable and affordable manner for all sections of society, doubling of farm incomes, creation of job opportunities through strengthening of industrial base etc. India must undertake an integrated and holistic approach to use innovative business models and dynamic decision making to address the multiple challenges at the policy and institutional levels or those posed by socio-cultural and market barriers, in order to successfully convert the challenges into opportunities for inclusive growth.

With global temperature increase likely to overshoot the “well below 2 degree Celsius” goal of the 2015 Paris Agreement, the events of the past few years portends a huge and expanding danger.

Climate change will require economy-wide transformation. India will need to make dramatic changes across the spectrum-energy, transportation, urban and agriculture systems. It will require investing in human capital, innovation and research and development. This is the moment for India to invest in re-skilling the 500,000 people who depend directly and indirectly on coal mining as the energy mix changes. It must invest in innovations that minimise the social cost of a climate-induced transformation of the economy. It is about creating more sustainable economies. And for a country such as India, filling the backlog of development in a climate constrained world poses a real and immediate Challenge. The path forward must focus on creating wealth that will provide the resilience to deal with the real and physical challenges that a warming earth presents, and to sustain the economic growth that will ensure a better life for all its people. For India, it has to be about creating the capacities to seize the opportunities that the climate crisis presents.

A few of the country’s pioneer efforts to tap forest catchment potential to augment water supplies to major cities and drier regions are highlighted as below:

Forests and varied natural water resources (surface water and ground water) are complex and dynamic in nature. In India, there has been a long history of management of forests as well as adequately documented traditional systems of water harvesting and water use, practiced in drylands.

Contribution to the Sustainable Development: