What are the relief features of the oceans?

The floors of the oceans are rugged with the world’s largest mountain ranges, deepest trenches and the largest plains. These features are formed, like those of the continents, by the factors of tectonic, volcanic and depositional processes. The ocean floors can be divided into four major divisions:

Abyssal plains are extremely flat and featureless plains of the deep ocean floor. They cover a major portion of the ocean floor between the depth of 3000m to 6000m. These plains are covered with fine-grained sediments like clay and silt.

The ocean deeps are the deepest part of the ocean. They are long, narrow, steep-sided and flat-floored depressions on the ocean floor. They are generally called submarine trenches. They are usually found adjacent to the areas of volcanic and earthquake activity. Great earthquakes and tsunamis are born in them. They occur in all the major oceans. The Pacific Ocean has the largest number of trenches. 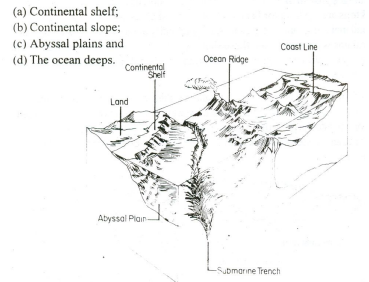