This law was formulated in the year 1780 by French physicist Jacques Charles. This law was described extensively in his unpublished work.

What is Charles Law?

Charles’ Law, also sometimes referred to as the law of volumes, gives a detailed account of how gas expands when the temperature is increased. Conversely, when there is a decrease in temperature it will lead to a decrease in volume.

When we compare a substance under two different conditions, from the above statement we can write this in the following manner:

This above equation depicts that as absolute temperature increases, the volume of the gas also goes up in proportion.

In other words, Charle’s law is a special case of the ideal gas law. The law is applicable to the ideal gases that are held at constant pressure but the temperature and volume keep changing.

Here are some examples by which you can understand Charle’s law very easily.

In winters as the temperature decreases, when you take a basketball outside in the ground the ball shrinks. This is the only reason why it is important to check the pressure in the car tyres when you go outside in the cold days. This is also the case with any inflated object and explains why it’s a good idea to check the pressure in your car tyres when the temperature drops.

If you overfill a tube that is placed on a pool on a hot day, it can swell up in the sun and burst. Similarly, as the turkey cooks, the gas inside the thermometer expands until it can “pop” the plunger. Pop-up turkey thermometers work based on Charles’ law. Another common application can be seen in the working of a car engine.

Charle’s Law formula is written as,

As we are aware of the fact that, at constant pressure, the volume of the fixed amount of the dry gas is directly proportional to absolute temperature according to Charle’s law. We can represent the statement in the following manner.

Since V and T are varying directly, we can equate them by making use of the constant k.

In this, the value of k depends on the pressure of the gas, the amount of the gas and also the unit of the volume.

Let us consider V1 AND T1 to be the initial volume and the temperature, respectively of an ideal gas.

Then we can write equation (1) as

After it lets change the temperature of the gas to T2. Alternatively, its volume changes to V2 then we can write

Equating the above equations that is equation 2 and 3, we get

According to Charles’ Law which states that the volume (V) of the gas is directly proportional to its temperature (T), which must be in Kelvin.

The density of the gas is inversely proportional to the temperature in the Kelvin when it is at a constant mass and pressure. 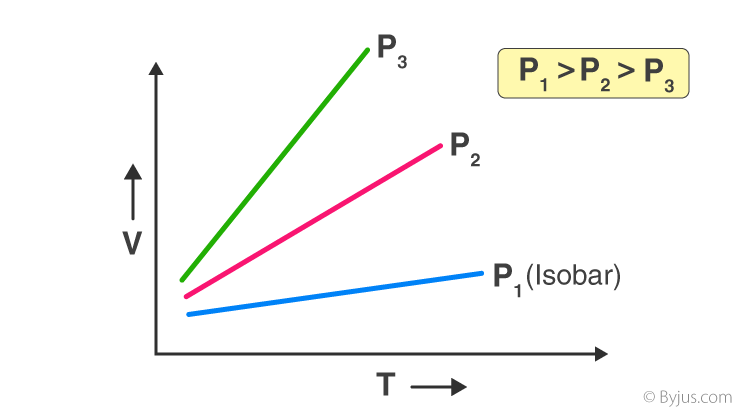 This law has a wide application in daily life. Some

Solution- According to the question, V1=400cm3

You need to find the V2.

Here only the temperature is changing, the pressure remains constant

Putting the above values in the Charle’s law we get,

According to Charle’s law

According to the question V2=?

As we are aware of the Charle’s law

It is very clear that the pressure is constant and the mass of the gas doesn’t change, so we can apply Charle’s law here.

The temperature in the question is given in Celcius, so as per the rule of Charle’s law it must be converted to the absolute temperature, that is Kelvin to apply the formula:

Now, these given values can be put in the formula to get the final volume.

By rearranging the above equation we can get the final volume