Heat is a form of energy that produces the sensation of hotness. Thermodynamics is the branch of physics that deals with the energy relationships involving heat, mechanical energy and other forms of energy. The entire formulation of thermodynamics is based on a few fundamental laws which have been established on the basis of the human experience of the experimental behaviour of macroscopic aggregates of matter collected over a long period of time.

Like solids and liquids, the gases also expand on heating. The volume of expansion of the gas depends not only on the temperature but also on the pressure to which it is subjected. Thus, there are three variables for gases: volume, pressure and temperature. To study the variation of any two variables, the third is kept constant. The interrelationships between these variables are known as the gas laws.

The pressure is inversely proportional to the volume at a constant temperature.

The volume of the gas is directly proportional to the absolute temperature at constant pressure.

The pressure of the gas is directly proportional to the absolute temperature at constant volume.

It is the relation connecting pressure, volume and temperature of the given mass of gas. It is obtained from Boyle’s law and Charle’s law which are obeyed by a perfect gas. If one mole of gas is considered then,

Here, P is the pressure

T is the absolute temperature

Convection: The transmission of heat due to the actual movement of the medium is called convection.

Radiation: Radiation is the process by which the heat gets transmitted from one point to another without the action of any material in between.

A system that is in thermal, mechanical and chemical equilibrium is called the thermodynamic equilibrium.

Internal Energy is the sum total of the kinetic energy and potential energy of the atoms/molecules due to the internal factors. The energy possessed by the atoms or molecules by virtue of their motion is called kinetic energy.

There are two methods to change the internal energy of the system,i.e., Heat and Work

Heat is the energy transferred due to the temperature difference between the system and the surrounding area. On heating, the kinetic energy of the molecules increases and therefore the internal energy increases.

The ability of a conductor to conduct heat is called thermal conductivity. It is defined as the quantity of heat flowing per second through the unit area of the block of unit thickness when the temperature difference between the two faces is 1K.

Here, dQ is the amount of heat given to the system

dU is the increase in the internal energy

dW is the external energy done by the system

Applications of First Law of Thermodynamics

Work done in an Isothermal Process

Some of the examples of isothermal processes are

Work done in an Adiabatic Process

T1 and T2 are the temperatures in the initial and final states of gas.

Some of the examples of the adiabatic process

Work done in an Isobaric Process

Work done in an Isochoric Process

The process of melting in which a solid is converted into a liquid is nearly isochoric, as the change in the volume due to melting is negligible.

(a) For an isothermal process

(b) For adiabatic process

Limitations of First Law of Thermodynamics

1. The first law of thermodynamics does not indicate the direction in which the change can proceed.

2. The law does not indicate the extent to which the change can take place.

The specific heat capacity of a substance can be defined as the amount of heat required to raise the temperature of the unit mass of the substance through 10C.

The specific heat capacity at constant pressure is the heat required to increase the temperature of 1 g of substance through 10C keeping the pressure constant.

Here, Cp is the specific heat capacity at constant pressure.

Cv is the specific heat capacity at constant volume

Mayer’s relation is valid only for perfect gases

Latent heat is the amount of heat required to change the state of the unit mass of the substance at constant pressure and temperature.

Latent heat of fusion: It is the amount of heat required to change the state from solid to liquid.

Latent heat of vaporization: It is the heat required to change the state from liquid to gas.

The rate of loss of heat by a body is directly proportional to the temperature difference between the body and the surroundings, provided the difference is small.

The total number of independent variables which are necessary to specify the position of the object are called the degrees of freedom.

Law of Equipartition of Energy

The law of equipartition of energy states that the total energy is equally shared by all the degrees of freedom and the average energy of a molecule in a gas associated with each degree of freedom is (½) kT, where

k is the Boltzman constant and T is its absolute temperature.

The ratio of specific heat capacity of a gas at constant pressure to that at constant volume (Cp/Cv) is an important constant.

The knowledge of helps in finding the atomicity of gas as well as the molecular structure of the gas.

It is impossible to derive a continuous supply of work by cooling a body to a temperature lower than that of the coolest of its surroundings.

Efficiency of the Heat Engine

The thermal efficiency of the heat engine is the ratio of the heat that gets converted into work to the total heat absorbed from the source during a complete cycle. The working substance absorbs a certain amount of heat Q1 during isothermal expansion. It rejects an amount of heat Q2 into the sink during the isothermal compression.

The efficiency of the Carnot’s engine depends only on the temperature of the source and sink. It will not depend on the working substance.

Chemical reactions are generally carried out at constant pressure (atmospheric pressure) so it has been found useful to define the new state function Enthalpy. Enthalpy is given by the sum of the internal energy and the product of the pressure and volume of a thermodynamic system. It is measured in joules or ergs since it has the dimension of energy.

Here, H is the enthalpy

U is the internal energy

P is the pressure

Factors Affecting the Enthalpy of a Reaction

b) Physical states of reactants and products

a) Entropy of the universe increases in all-natural processes

c) Entropy is not conserved

d) Entropy can be created but not destroyed

It relates the rate of change of pressure with temperature to latent heat. It can be applied to any equilibrium between two phases namely solid and liquid, liquid and water etc. According to the Clausius Clapeyron Equation.

Here, L is the latent heat

V1 is the volume of the first state

Latent heat is the quantity of heat supplied to the unit mass of the substance during the change of state.

The melting point or the freezing point of a substance is the temperature at which the solid and liquid phases of the substance co-exist in equilibrium. For this equilibrium, the Clapeyron equation can be written as

Here, T is the melting point or the freezing point of the substance

VL is the molar volume of the liquid phase

Vs is the molar volume of the solid phase

ΔHf is the molar latent heat of fusion

dT/dP represents the rate of change of freezing point with external pressure P.

For substances like ice that contract on melting, the value of VL – VS becomes negative. As a result, dT/dP is negative. Meaning, the melting or freezing point of ice decreases with increases in pressure.

For substances like sulphur that expand on melting, the value of VL – VS becomes positive. As a result, dT/dP is positive. Therefore, the melting or freezing point of ice increases with increases in pressure.

The boiling point temperature is the temperature at which the liquid and vapour phases of the substance co-exist in equilibrium. For this equilibrium, the Clapeyron equation can be written as

VV and VL are the molar volumes of the vapour and liquid phase, respectively

T is the boiling point of the substance

ΔHv is the molar latent heat of vaporization of the substance

The theoretical thermodynamic cycle proposed by Sadi Carnot in 1824 is called the Carnot Engine. He used a heat engine that performed a perfectly reversible cyclic process. No engine operating between a source and a sink at two given temperatures can be more efficient than a Carnot reversible engine operating between the same two temperatures. This is known as Carnot’s principle.

The working substance in a Carnot’s engine is taken through a reversible cycle of operations consisting of two isothermal and two adiabatic processes. 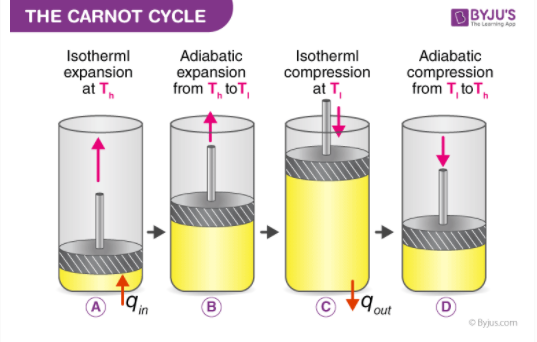 It is a device that is used to keep bodies at a temperature lower than that of the surrounding.

The amount of heat removed per unit of work done is called the coefficient of performance of a refrigerator.

A new thermodynamic state function G, the Gibbs free energy is defined as

For a spontaneous reaction, ΔG must be negative. The use of Gibbs free energy has the advantage that it refers to the system only.

1) Ideal gas is contained in a thermally insulated and rigid container and it is heated through a resistance 100 Ω by passing a current of 1 A for five minutes, then change in internal energy of the gas is

Since the container is rigid, there is no work done when the gas expands,

3) Which of the following parameters does not characterize the thermodynamic state of matter?

5) A gas is suddenly expanded such that its final volume becomes 3 times its initial volume. If the specific heat at the constant volume of the gas is 2R, then the ratio of initial to final pressure is nearly equal to

1) A given mass of a gas is compressed isothermally until its pressure is doubled. It is then allowed to expand adiabatically until its original volume is restored and its pressure is then found to be 0.75 of its initial pressure. The ratio of the specific heats of the gas is approximately

2) Unit mass of a liquid volume V1 is completely changed into a gas of volume V2, at a constant external pressure p and temperature T. If the latent heat of evaporation for the given mass is L, then the increase in the internal energy of the system is

3) A diatomic ideal gas is used in a car engine as the working substance. If during the adiabatic expansion part of the cycle, the volume of the gas increases from V to 32 V. The efficiency of the engine is

5) A Carnot engine with a sink’s temperature at 17°C has 50% efficiency. By how much should its source temperature be changed to increase its efficiency to 60%?

What are the different types of thermodynamic processes?

What are the two significant statements of the second law of thermodynamics?

Kelvin- Planck’s Statement
It is impossible to derive a continuous supply of work by cooling a body to a temperature lower than that of the coolest of its surroundings.

What is a heat engine?

A machine that converts heat energy into mechanical energy is called the heat engine.

Define the zeroth law of thermodynamics.