A heat engine is a system which converts heat into work by taking heat from the reservoir ( hot body) to carry out some work. There is a discharge of some heat to the sink (cold body). In this system, there will also be some waste in the form of heat. There are different types of a heat engine in which a Carnot engine has the maximum efficiency.

A very basic diagram of the heat engine is given below: 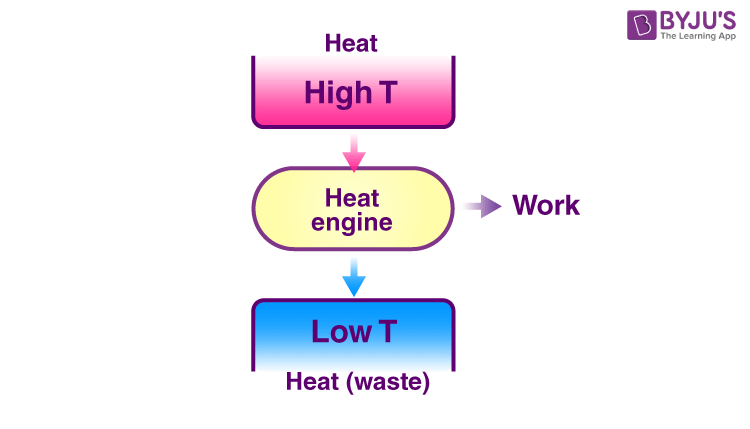 The first law is the application of conservation of energy and the second law sets limits on the possible efficiency of the machine and determines the direction of flow of energy.

Here the fuel gets burned outside the engine or at a far distance from the engine by which it can produce force and motion. A very good example of an external combustion engine is a steam engine.

Water is heated outside or far away from the system by using coal fire and the steam produced is given to the top of the metal cylinder through pipes and the heat is given to the engine and it moves the piston back and forth and the work is done. The fluid is then cooled, compressed and reused.

Here the fuels are burned inside the champer. Car engine a very good example of this type of combustion engine.

The heat produced due to combustion is given to the engine and the work is done. It is also called 4-stroke because it takes 4 strokes for the piston to complete one combustion cycle.

Heat engine like automobile engines operated in a cyclic manner. They will add energy in the form of heat in one part of the cycle and use this energy to do useful work from another part of the cycle.

Heat engines can be typically illustrated on a PV diagram, 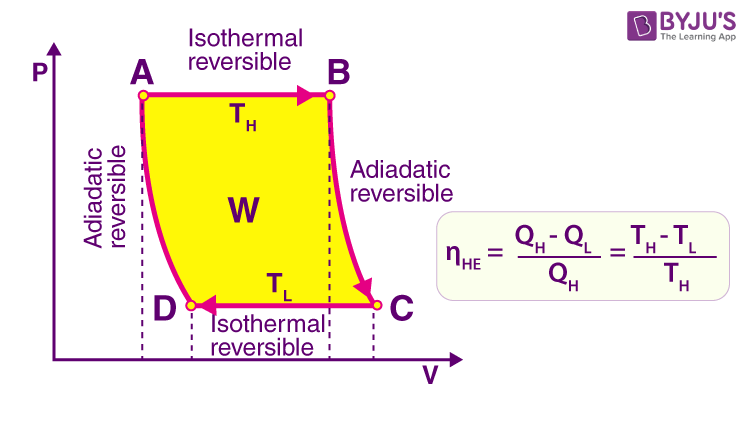 Pressure-Volume (PV) diagrams are the basic tool for the study of heat engines that use gas as the working substance.PV diagram will be a closed-loop for a cyclic heat engine. The area of the loop is the representation of the amount of work done during the cycle.

The idea of the efficiency of an engine cycle can be obtained by comparing the PV diagram with the Carnot cycle, which is the most efficient type of heat engine.

The efficiency is the fraction of heat input at high-temperature changes to work. In the second law of thermodynamics, it says that no engine is 100% efficient.

A Carnot engine is an ideal engine that can operate in a reversible closed thermodynamic cycle where the working substance goes through four successive operations such as isothermal expansion, adiabatic expansion, isothermal compression and adiabatic compression. It is the basis of other thermodynamic cycles that have vast applications in industries. Two common applications are the Carnot heat engine and refrigerators.

Although the Carnot engine is the ideal engine, in reality, no engine achieves Carnot’s theoretical maximum efficiency since friction plays an important role. The efficiency of a Carnot engine uniquely depends on the temperature of the hot and cold reservoir.

Carnot engine basically draws heat (Q1) from the source and rejects heat (Q2) to the sink while performing an amount of work, W = Q1 – Q2. 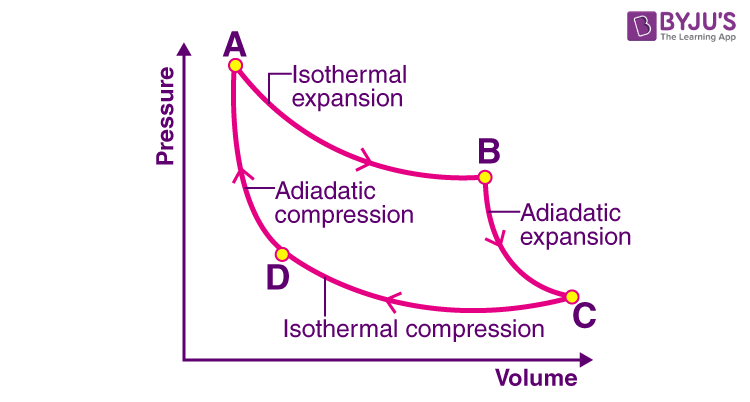 The efficiency of the Carnot engine is given as,

Meanwhile, it is also known that,

Work done in each step:

A steam engine is a heat engine that gives mechanical work using steam as working fluid. It uses the force produced by the steam pressure to move the piston forward and backward inside the chamber. This pushing force is transferred to work. This is a type of external combustion engine in which working fluid is burned out of the chamber giving the steam to the source using a pipe.

This is a type of internal combustion engine where combustion takes place internally. The main purpose of a gasoline car engine is to convert gasoline into motion so that your car can move. The easiest way to produce this motion is to burn the gasoline inside the engine. Here the air is also used to burn the working fluid.

A normal refrigerator is an example of a heat pump and in reverse, it is a heat engine. Here, work is used to create a heat differential. Many more cycles can work in reverse to flow heat from the cold side to the hot side. Internal combustion engine parts of these cycle are also not reversible. Heat pump consumes work and is basically used for heating purposes.

It is a type of external combustion engines. In olden years, the machine that was used was very gigantic in size almost the size of a room. These early devices had a cylinder and a piston attached to a large beam which performed the working of machines.

What is a heat engine?

A heat engine is a device that converts heat energy to mechanical energy.

The efficiency of a heat engine cannot be 100%. Explain why?

What are the factors on which the efficiency of the Carnot engine depends?

The efficiency of the Carnot’s engine depends on the absolute temperature of the source and sink.

Why can a ship not use the internal energy of seawater to operate the engine?

Heat energy is converted into what form of energy in a heat engine?

Heat energy gets converted into mechanical energy in a heat engine.

Give examples of heat engines?

Define the efficiency of the heat engine.

The efficiency of the heat engine is the ratio of mechanical work done to the heat absorbed.