In order to give candidates more time and chances, the JEE Main 2021 had four sessions, with two more sessions added to JEE Main. Thus, the candidates will have the following advantages.

JEE Main Paper-1 included a total of 90 questions and the overall mark was 300. The question paper had three sections which included questions from maths, physics and chemistry. The marks allotted for each section are given below

The overall difficulty level of the paper was moderate, according to the initial feedback from students who took the shift 1 exam.

Due to the lengthy calculations, the mathematics paper was considered simple, but time-consuming. Seven problems from calculus, five from coordinate geometry, four from vectors and three-dimensional, and at least five from algebra were asked. Nearly every topic was covered from maths.

As mentioned by the students, the physics section was the most challenging. There were 5 to 6 questions from electromagnetics, 8 from mechanics, 2 from units and dimensions, and 4 from optics. A few questions were included from other chapters.

JEE Main 2021 – Session 4 Day 3 was conducted on August 31, 2021. Up to 1 lakh candidates appeared for the Joint Entrance Examination (JEE) during the two slots.

At least two numerical problems, one in physics and the other in chemistry, have been identified by students as being unsolvable. Some students have noted that the questions derived from the photoelectric effect were unclear. Regarding mathematics, a few students claimed that the paper was a little simpler than they had anticipated.

The expert analysis of the question paper is as follows

The mathematics portion was easy for a majority of students. As expected, some of the questions required extensive calculations. There were 7 to 8 calculus problems, at least 5 algebra questions, 3 to 4 questions about vectors and 3D, and 4 questions about coordinate geometry.

Physics paper was similarly of moderate difficulty level. Questions were asked from all the main chapters – 2 questions from optics, not less than 5 questions from mechanics, 2 or 3 questions from Thermodynamics and 2 questions from Semiconductors among others. As may be predicted, questions of a numerical nature focused more on numbers than on theory, and nearly all of them were based on straightforward formulas.

The hardest of the three subjects was maths, whereas chemistry was the easiest. According to the students, this paper was overall of a moderate level.

The difficulty level of the examination was moderate to hard. Calculus, 3D, and Vector Algebra chapters received maximum weightage. Binomial Theorem, Permutation, Combination, Probability & Matrices, Properties of Definite Integral, and Differential Equation all had some excellent and challenging questions. Topics like Circle and Ellipse also had a few challenging questions.

The physics question was easy to moderate. The physics question paper was well balanced with practically every chapter being covered. There were some excellent questions from Kinematics, Electromagnetic Waves, Electromagnetic Induction, Heat & Thermodynamics, Semiconductors, Modern Physics, and Optics. Despite having long calculations, several questions with a numerical basis were simple. 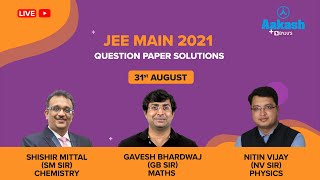 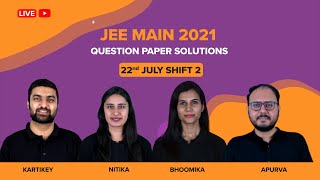 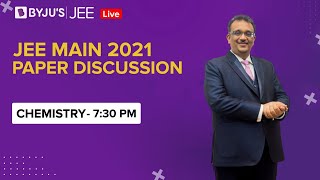