JEE Main marks the first step to IIT aspirants, who would then emulate with other candidates (based on JEE Main 2016 cutoff) in JEE Advance to get into prestigious institutes like IIT and ISM, Dhanbad.
Download Analysis As PDF: JEE Main 2016 Paper Analysis PDF

JEE Main 2016 online mode was conducted on April 9, and April 10, 2016. The JEE Main paper consisted of 3 sections including subjects such as Physics, Chemistry and Mathematics. The questions asked with multiple choice answers (MCQ’s). Each section has 30 questions and the total marks for each section are 120.

The online mode was relatively easier when compared to offline mode. 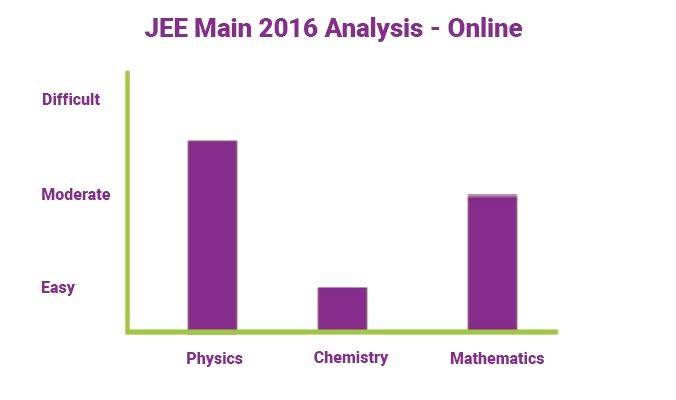 Physics section was the toughest amongst the 3 sections, but when compared with JEE Main 2016 offline mode; it was easy.

Chemistry section was the easiest section with many questions that were direct and memory-based.

Maths section was easy but was lengthy. Though many students pointed out that, there was one question in Math section which had no matching option.

Overall, JEE Main 2016 in online mode was of moderate difficulty level with at least 1 question from each of the chapters in Physics, Chemistry and Mathematics.