Linear Programming is widely used in Mathematics and some other field such as economics, business, telecommunication, and manufacturing fields. In this article, let us discuss the definition of linear programming, its components, a simplex method with linear programming problems.

What is Linear Programming?

Linear programming (LP)  or Linear Optimisation may be defined as the problem of maximizing or minimizing a linear function that is subjected to linear constraints. The constraints may be equalities or inequalities. The optimisation problems involve the calculation of profit and loss.  Linear programming problems are an important class of optimisation problems, that helps to find the feasible region and optimise the solution in order to have the highest or lowest value of the function.

Linear programming is the method of considering different inequalities relevant to a situation and calculating the best value that is required to be obtained in those conditions.

Some of the assumption taken while working with linear programming are:

The basic components of the LP are as follows:

The following are the five characteristics of the linear programming problem:

Constraints – The limitations should be expressed in the mathematical form, regarding the resource.

Objective Function – In a problem, the objective function should be specified in a quantitative way.

Linearity – The relationship between two or more variables in the function must be linear. It means that the degree of the variable is one.

Finiteness –  There should be finite and infinite input and output numbers. In case, if the function has infinite factors, the optimal solution is not feasible.

Non-negativity – The variable value should be positive or zero. It should not be a negative value.

The Linear Programming Problems (LPP) is a problem that is concerned with finding the optimal value of the given linear function. The optimal value can be either maximum value or minimum value. Here, the given linear function is considered an objective function. The objective function can contain several variables, which are subjected to the conditions and it has to satisfy the set of linear inequalities called linear constraints. In Linear programming, the term “linear” represents the mathematical relationship that is used in the given problem (Generally, linear relationship) and the term “programming” represents the method of determining the particular plan of action. The linear programming problems can be used to get the optimal solution for the following scenarios, such as manufacturing problems, diet problems, transportation problems, allocation problems and so on.

The simplex method is one of the most popular methods to solve linear programming problems. It is an iterative process to get the feasible optimal solution. In this method, the value of the basic variable keeps transforming to obtain the maximum value for the objective function. The algorithm for linear programming simplex method is provided below:

Step 1: Establish a given problem. (i.e.,) write the inequality constraints and objective function.

Step 2: Convert the given inequalities to equations by adding the slack variable to each inequality expression.

Step 6: Carry out pivoting to make all other entries in the column is zero.

Step 7: If there are no negative entries in the bottom row, end the process. Otherwise, start from step 4.

The graphical method is used to optimize the two-variable linear programming. If the problem has two decision variables, a graphical method is the best method to find the optimal solution. In this method, the set of inequalities are subjected to constraints. Then the inequalities are plotted in the XY plane. Once, all the inequalities are plotted in the XY graph, the intersecting region will help to decide the feasible region. The feasible region will provide the optimal solution as well as explains what all values our model can take. Let us see an example here and understand the concept of linear programming in a better way.

Calculate the maximal and minimal value of z = 5x + 3y for the following constraints.

The three inequalities indicate the constraints. The area of the plane that will be marked is the feasible region.

The optimisation equation (z) = 5x + 3y. You have to find the (x,y) corner points that give the largest and smallest values of z.

To begin with, first solve each inequality.

Here is the graph for the above equations. 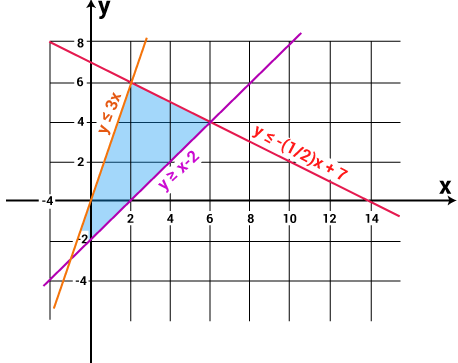 Now pair the lines to form a system of linear equations to find the corner points.

Solving the above equations, we get the corner points as (2, 6)

Solving the above equations, we get the corner points as (6, 4)

Solving the above equations, we get the corner points as (-1, -3)

For linear systems, the maximum and minimum values of the optimisation equation lie on the corners of the feasibility region. Therefore, to find the optimum solution, you only need to plug these three points in z = 3x + 4y

A real-time example would be considering the limitations of labours and materials and finding the best production levels for maximum profit in particular circumstances. It is part of a vital area of mathematics known as optimisation techniques. The applications of LP in some other fields are

Define the concept of Linear Programming.

Linear programming is a process of optimising the problems which are subjected to certain constraints. It means that it is the process of maximising or minimizing the linear functions under linear inequality constraints. The problem of solving linear programs is considered as the easiest one.

What are the requirements of linear programming?

Mention the advantages of Linear programming

The advantages of linear programming are:
Linear programming provides insights to the business problems
It helps to solve multi-dimensional problems
According to the condition change, LP helps in making the adjustments
By calculating the cost and profit of various things, LP helps to take the best optimal solution

What is meant by linear programming problems?

The linear programming problems (LPP) helps to find the best optimal solution of a linear function (also, known as the objective function) which are placed under certain constraints (set of linear inequality constraints)

To learn all concepts in Maths in a more engaging way, register at BYJU’S. Also, watch interesting videos on various Maths topics by downloading BYJU’S– The Learning App.