Let us learn all the properties of trapezium along with area and perimeter formula, its types and examples.

What is a Trapezium?

From the above figure, we can see, sides AB and CD are parallel to each other whereas AC and BD are non-parallel sides. Also, ‘h’ is the distance between the two parallel sides which demonstrates the height of the trapezium.

A trapezium is a closed shape or a polygon, that has four sides, four corners/vertices and four angles. Anyone pair of opposite sides of a trapezium are parallel to each other.

There are many real-life examples of trapezium shape that we can see around us. For example, a table whose surface is shaped like a trapezium.

The trapezium is categorised into three types:

If the legs or the non-parallel sides of the trapezium are of equal length, then it is called an isosceles trapezium.

A trapezium with all the sides and angles of different measures is called a scalene trapezium.

A right trapezium is a trapezium that has at least two right angles, adjacent to each other. 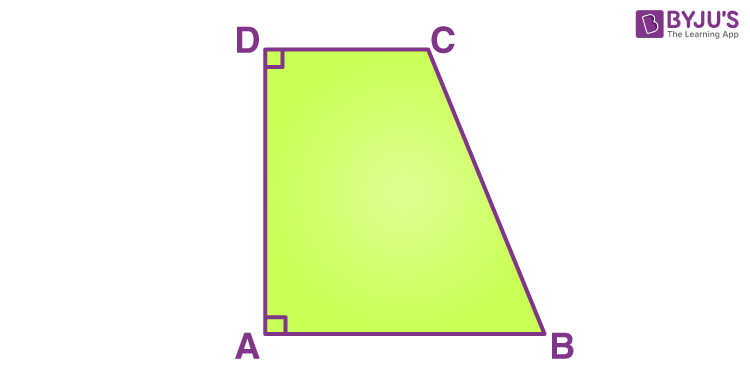 Some important properties of a trapezium are as follows:

Where AB and CD are the parallel sides or bases

The two important formulas of trapezium are given below:

“h” is the altitude or height.

Now, c is the length of two non-parallel sides and h is the height of an isosceles trapezium. So here,

If we draw perpendicular h from CD to meet AB at E, such that, it forms a right triangle, AED, then,

As we know, the formula for area of trapezium is:

Therefore, using the perimeter formula, we get;

The trapezium is a four-sided polygon and a two-dimensional figure which has exactly one pair of parallel sides opposite to each other.

Although both words are used differently in different countries. But in general Mathematics, both are same.

How to Find Angles of Trapezium

For a regular or isosceles trapezium, the sets of angles adjoined by parallel lines are equal. Also, we know, for any quadrilateral the sum of all the interior angles is equal to 360 degrees.

Hence, if an angle say, x, is given between the one parallel side and one non-parallel side, then subtracting twice of this angle from 360, will give the sum of two angles on the formed opposite side of x. Once, the sum is determined, then by dividing the sum by 2 will give the measure of the fourth angle.

Example: If a base angle of a trapezium, included between a parallel side and a non-parallel side is equal to 72 degrees. Then find the angle opposite to the given angle.

Given, one of the base angles of a trapezium say ABCD is 72 degrees.

Let the angle to be found = x

As we know, by angle sum property of quadrilateral, sum of all the angles equal to 360 degrees.

Since, both the above angles are equal for an isosceles trapezium, hence,

Which is the required angle

Q.1: Find the area of the trapezium, in which the sum of the bases (parallel sides) is 60 cm and its height is 20 cm.

Substitute the given values,

Solution: By the formula of the perimeter of trapezium, we know;

P = Sum of all the sides

Hence, the perimeter is 18cm.

Does a Trapezium have Parallel Sides?

Are the Diagonals of a Trapezium Equal?

No, the diagonals of a trapezium may not be equal. For a trapezium, only 1 pair of its sides are parallel. But, for any quadrilateral to have equal diagonals, two pairs of sides should be parallel like in a square, rectangle, etc.

Do Diagonals Bisect each other in a Trapezium?

Is square a trapezium?

No, to be a trapezium or a trapezoid, a quadrilateral should have exactly one pair of parallel sides and the other two sides are non-parallel.

Stay tuned with BYJU’S – The Learning App to learn other interesting maths-related articles and also watch interactive videos to learn with ease.

Test your knowledge on Trapezium
Q5