Presenting the most well-structured and accurate NCERT Solutions for Class 6 English Unit 3 – Taro’s Reward at BYJU’S. These solutions will help students to gear up and attempt the English exam with full vigour. The NCERT Solutions of Class 6 English have been curated by our panel of expert teachers to provide the best-in-class solutions for Class 6 students.

The story, “Taro’s Reward” is about Taro, who is a very hardworking and dutiful son to his parents. He works very hard to fulfil his parent’s wishes and gets rewarded in the most unexpected manner. This chapter teaches students that hard work pays off and they should always honour and obey their parents. To read more about the story, students can access NCERT Solutions available for free. 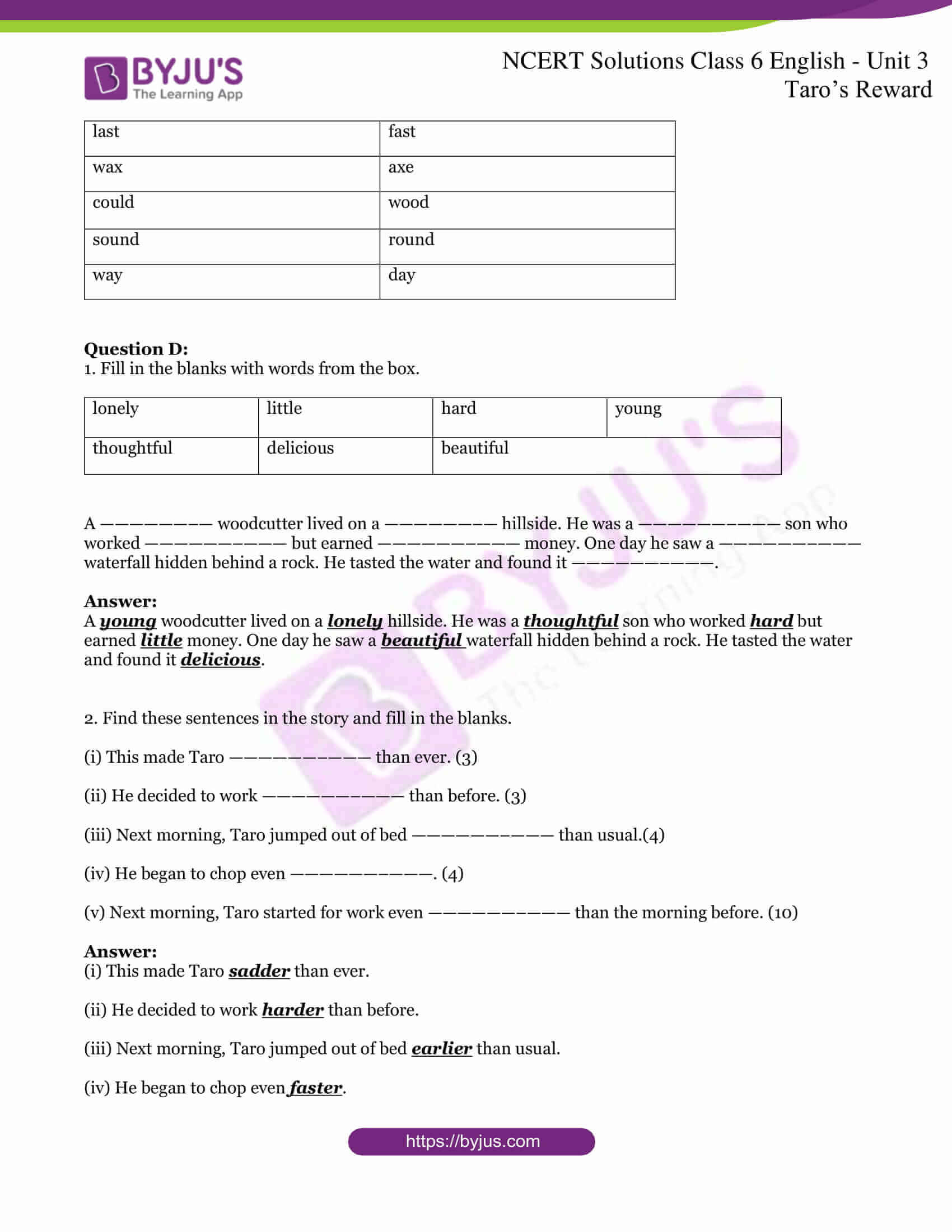 Why did Taro run in the direction of the stream? (5)

Taro ran in the direction of the stream because he was very thirsty. He had never seen a rushing stream or heard the sound of falling water in that part of the forest.

How did Taro’s father show his happiness after drinking saké? (7)

Taro’s father was so delighted with the saké that when he swallowed a sip of the liquid, he stopped shivering and became energetic and did a little dance in the middle of the floor.

Why did the waterfall give Taro saké and others water? (12)

The waterfall gave Taro saké and others water because Taro was a very thoughtful and dutiful son to his parents. He used to serve his parents with dedication and sincerity. The saké from the waterfall was a reward for his goodness. On the other hand, the people of his village got plain water because they were greedy.

When the villagers went to the waterfall with big pitchers and vessels to collect saké, they simply got plain water from the waterfall. They thought that Taro had fooled and tricked them. Hence, they decided to punish him by drowning him in the same waterfall.

Why did the Emperor reward Taro? (13)

Taro was a very dutiful son to his parents and served them with devotion. The Emperor rewarded him with twenty pieces of gold for having been so good and kind to his parents. He also named the fountain after Taro. Through this reward, the Emperor declared Taro as a role model for all children and wanted to encourage all of them to love, honour and obey their parents.

(i) he didn’t work hard enough.

(iii) the price of wood was very low.

(i) to live a more comfortable life.

(ii) to buy his old father some saké.

(iii) to repair the cracks in the hut.

3. The neighbour left Taro’s hut in a hurry because

(i) she was delighted with the drink.

(ii) she was astonished to hear Taro’s story.

(iii) she wanted to tell the whole village about the waterfall.

(iii) the price of wood was very low.

(ii) to buy his old father some saké.

3. The neighbour left Taro’s hut in a hurry because

(iii) she wanted to tell the whole village about the waterfall.

Strike off the words in the box below that are not suitable.

Taro wanted to give his old parents everything they needed.

This shows that he was …

1. “This made Taro sadder than ever.”

(i) a strong wind that began to blow.

(iii) Taro’s inability to buy expensive saké for his father.

2. “This, said the emperor, was to encourage all children to honour and obey their parents.”

(i) the most beautiful fountain in the city.

(ii) rewarding Taro with gold and giving the fountain his name.

(iii) sending for Taro to hear his story.

1. “This made Taro sadder than ever.”

(iii) Taro’s inability to buy expensive saké for his father.

2. “This, said the emperor, was to encourage all children to honour and obey their parents.”

(ii) rewarding Taro with gold and giving the fountain his name.

Arrange the words below in pairs that rhyme.

1. Fill in the blanks with words from the box.

A young woodcutter lived on a lonely hillside. He was a thoughtful son who worked hard but earned little money. One day he saw a beautiful waterfall hidden behind a rock. He tasted the water and found it delicious.

2. Find these sentences in the story and fill in the blanks.

(i) This made Taro sadder than ever.

(ii) He decided to work harder than before.

(iii) Next morning, Taro jumped out of bed earlier than usual.

(iv) He began to chop even faster.

(v) Next morning, Taro started for work even earlier than the morning before.

Speak the following sentences clearly but as quickly as you can. Learn them by heart.

1. The story ‘Taro’s Reward’ shows that Taro is thoughtful, hardworking and also wise. Read aloud the parts of story that show these qualities in Taro.

2. (i) Like Patrick in the story ‘Who Did Patrick’s Homework’, Taro is helped by magic. Do you believe in magic? What are the magical things that happen in these stories?

(ii) Which story do you like better, and why? Do you know such stories in other languages? Discuss these questions in class.

3. Now write a paragraph or two about these two stories, comparing them.

“But Taro had been wise enough to slip behind a rock when he saw how things were going.”

(ii) Honestly speaking, I do like both the stories as they are interesting and have a hint of magic in them. However, I really appreciate Taro’s story as it teaches us a major lesson that hard work always pays off and that we should always respect and obey our parents who sacrifice so much for our sake.

(For the second part of the question, please attempt by yourself).

On the contrary, “Taro’s Reward” is the story of a young and hardworking woodcutter who is a thoughtful son to his parents. He tries his best to keep his parents happy and even God favours his thoughtfulness and rewards him. A magical waterfall offers saké instead of plain water for his old father to drink. This story has a moral lesson that hard work always pays off and that we should always respect and obey our parents who sacrifice so much for our sake.

1. Listen to these children. What are they talking about? 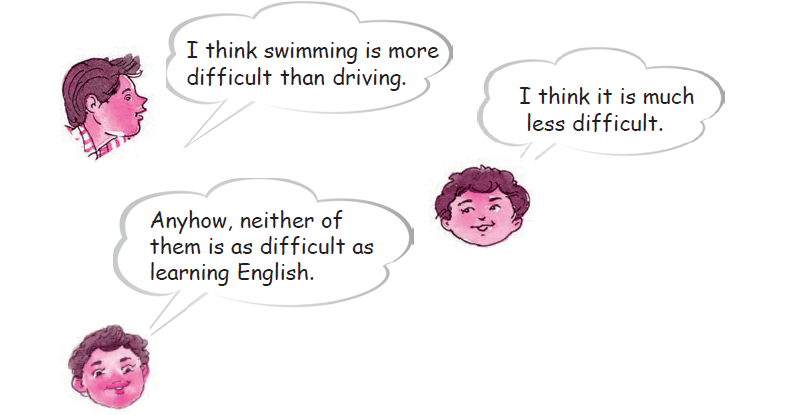 2. Work in groups. Come to some agreement on each of the activities given below. Decide which is the most interesting, dullest, most dangerous, safest, most rewarding, most exciting.

Your teacher will speak the words given below. Write against each two new words that rhyme with it.