Would you support your friend even if he/she does something wrong? Or you would talk to your friend about where things are taking a wrong turn? What if your friend is being unjust? What would you choose between friendship and justice? This chapter of NCERT Solutions for Class 6 English is a story of two friends Jumman Shaikh and Algu Chowdhry with a similar scenario.

You can also download these NCERT Solutions in PDF format through the link provided below and enjoy learning anywhere, anytime! 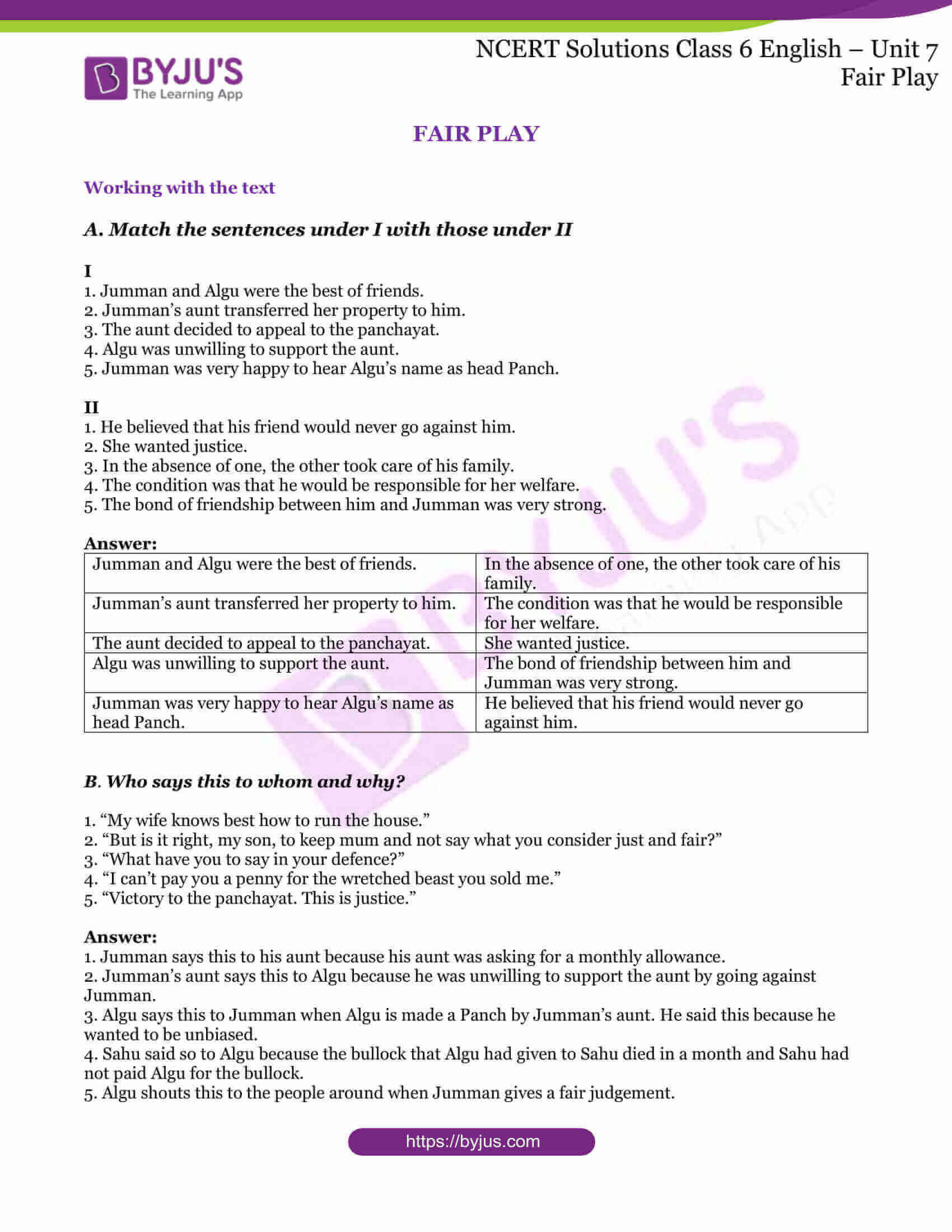 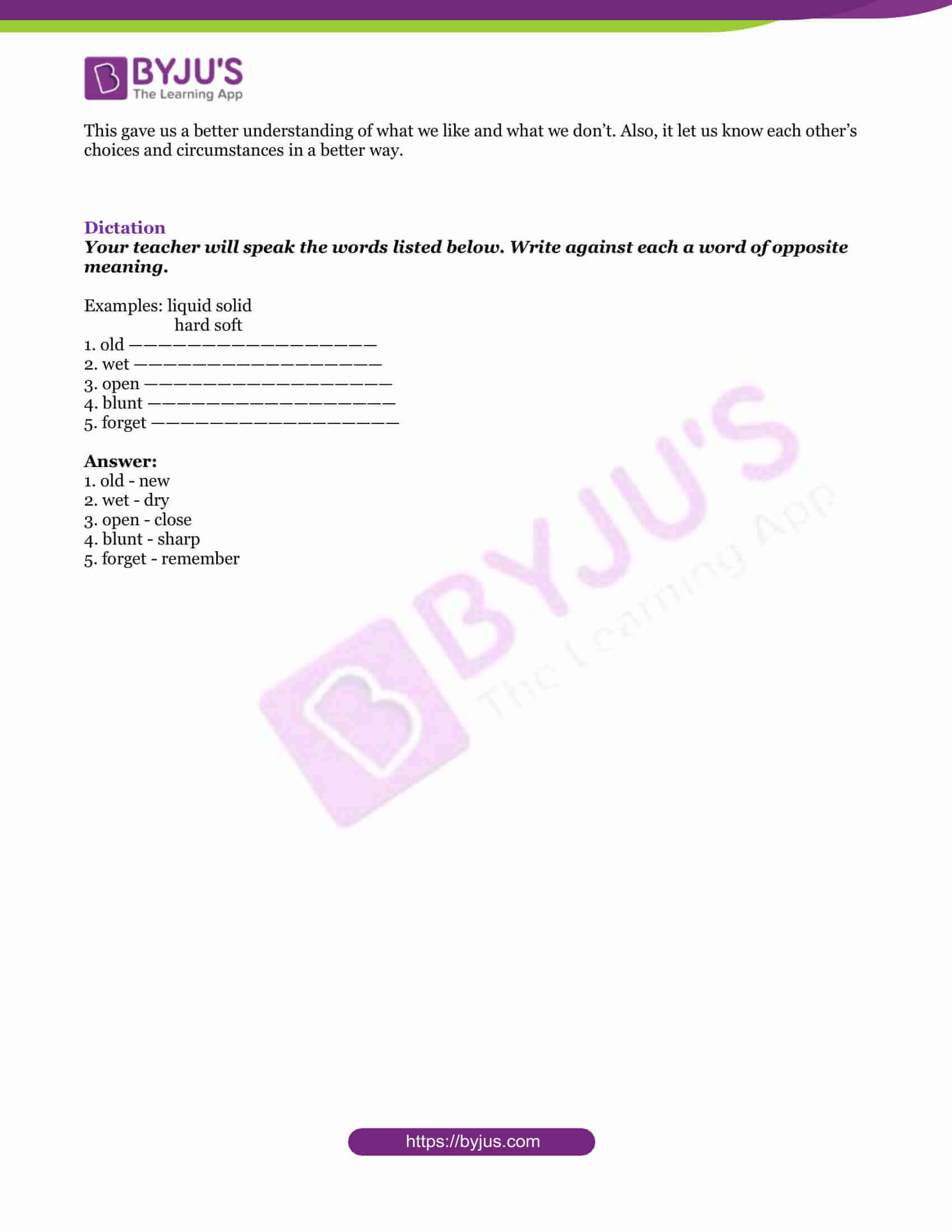 A. Match the sentences under I with those under II

1. Jumman and Algu were the best of friends.

2. Jumman’s aunt transferred her property to him.

3. The aunt decided to appeal to the panchayat.

4. Algu was unwilling to support the aunt.

1. He believed that his friend would never go against him.

3. In the absence of one, the other took care of his family.

4. The condition was that he would be responsible for her welfare.

5. The bond of friendship between him and Jumman was very strong.

B. Who says this to whom and why?

2. “But is it right, my son, to keep mum and not say what you consider just and fair?”

4. “I can’t pay you a penny for the wretched beast you sold me.”

5. “Victory to the panchayat. This is justice.”

1. Jumman says this to his aunt because his aunt was asking for a monthly allowance.

2. Jumman’s aunt says this to Algu because he was unwilling to support the aunt by going against Jumman.

3. Algu says this to Jumman when Algu is made a Panch by Jumman’s aunt. He said this because he wanted to be unbiased.

4. Sahu said so to Algu because the bullock that Algu had given to Sahu died in a month and Sahu had not paid Algu for the bullock.

5. Algu shouts this to the people around when Jumman gives a fair judgement.

Answer: The situation of the aunt in Jumman’s house changed. Earlier she was being taken care of but things changed and she was ill-treated.

2. When Jumman’s aunt realised that she was not welcome in his house, what arrangement did she suggest? (3)

Answer: She suggested that she get a monthly allowance from Jumman as she could not handle the insult any more. She wanted to cook separately.

3. What was the villagers’ reaction when the aunt explained her case to them? (4)

Answer: The villager’s gave mixed reactions. Some sympathized with her, some laughed at her and some others said that she should try to make up with Jumman and his wife.

4. Why was Jumman happy over Algu’s nomination as head Panch? (6)

Answer: Jumman was happy over Algu’s nomination as head Panch because Algu was his friend and he knew that he would not give a judgement that went against him.

Answer: She meant to remind Algu that Panch holds a position equal to God so he should never be biased. He should be just and fair.

Answer: Algu gave a verdict that shocked Jumman. He asked Jumman to pay a monthly allowance to his aunt. Jumman was very upset at this judgement and he began to consider Algu as his enemy.

7. Algu found himself in a tight spot. What was his problem? (9)

Answer: Algu had sold a bullock to Sahu. Sahu had promised that he would pay for the bullock in a month. But the bullock died within a month.

Algu found himself in a tight spot because Sahu refused to pay money for the bullock as it died.

Answer: Algu was upset over Jumman’s nomination as head Panch because he was certain that Jumman would take revenge of the judgement that Algu has given earlier.

Answer: When Jumman was made the head Panch, he thought for a while if he should take revenge. But he realized that he was sitting in the position of a Panch. He had to be unbiased. Jumman’s verdict was that Sahu should pay Algu the amount of the bullock.

Algu was extremely happy at the verdict. He began to shout that it was the victory of the Panchayat.

10. Which of the following sums up the story best?

(i) “I also know that you will not kill your conscience for the sake of friendship.”

(ii) “Let no one deviate from the path of justice and truth for friendship or enmity.”

Give a reason for your choice.

Answer: In my opinion, “Let no one deviate from the path of justice and truth for friendship or enmity” sums up the story the best as it clearly shows why Jumman and Algu were not able to give wrong verdicts being at the position of Panch. Justice should always prevail.

A. Replace the italicized portion of each sentence below with a suitable phrase from the box. Make necessary changes, wherever required.

look after, swallow, make it up, keep mum, go into, ease one’s conscience, as ill luck would have it, a tight spot, take chances, my heart sank

1. The best way to avoid an unnecessary argument is to remain silent.

2. Unfortunately, the train I was trying to catch was cancelled.3. He has been told not to take risks while driving a car through a crowded street.

3. He has been told not to take risks while driving a car through a crowded street.

4. The patient needs to be properly taken care of.

5. Why don’t the two of you end your quarrel by shaking hands?

6. I was in a difficult situation till my friends came to my rescue.

7. When I saw a pile of dirty dishes, I felt very disappointed.

8. I will examine the matter carefully before commenting on it.

9. They criticized him in the meeting but he accepted without protest all the criticism.

10. It will free me from worry to know that I had done nothing wrong.

1. The best way to avoid an unnecessary argument is to keep mum.

2. As ill luck would have it, the train I was trying to catch was cancelled.3. He has been told not to take chances while driving a car through a crowded street.

3. He has been told not to take chances while driving a car through a crowded street.

4. The patient needs to be properly looked after.

5. Why don’t the two of you make it up by shaking hands?

6. I was in a tight spot till my friends came to my rescue.

7. When I saw a pile of dirty dishes, my heart sank.

8. I will go into the matter carefully before commenting on it.

9. They criticized him in the meeting but he swallowed all the criticism.

10. It will ease my conscience to know that I had done nothing wrong.

B. Look at the following phrases and their meanings. Use the phrases to fill in the blanks in the sentences given below.

set up — put in place or start

set aside — save or keep for a particular purpose

set down — write or record

set out — start on a journey

set in — begin and seem likely to continue

A. Look at the following picture. One asks a question, the other answers it. Then the answer is noted in a form as shown below. B. Work in small groups. Ask your partner the questions given below. If possible, ask him/her a reason for saying Yes or No. Then tick Yes/No, whichever is proper.

1. Do you have a separate room for sleep and study? Yes/No

2. Would you prefer to live in a joint family? Yes/No

5. Do you find the place overcrowded? Yes/No

6. Do you use public transport? Yes/No

7. Would you like a vehicle of our own? Yes/No

C. Now that you have completed the above project, write a brief report stating what you did, how you did it and the conclusion.

This gave us a better understanding of what we like and what we don’t. Also, it let us know each other’s choices and circumstances in a better way.

Your teacher will speak the words listed below. Write against each a word of opposite meaning.