Exercise 7.2 of Class 9 Maths Chapter 7 consists of properties of Triangles and Theorems related to it. Most students regard this topic as boring as it is more of proving and less of solving. But, if students understand the properties of Triangles by correlating it to the examples then they will start taking an interest in it. Here, we have provided the NCERT Solutions for Class 9 Maths Chapter 7 Triangles Exercise 7.2 for students convenience. After going through the solutions, students can easily understand the method of solving the questions.

The NCERT Solutions for Class 9 Maths Chapter 7 Triangles is solved by our team of experienced teachers. These solutions will help students to understand the way of approaching the questions. Also, it will help them write the answers in a step by step format, so that they can score high marks in the first term Maths paper. To download the Exercise 7.2 solution PDF, visit the link below. 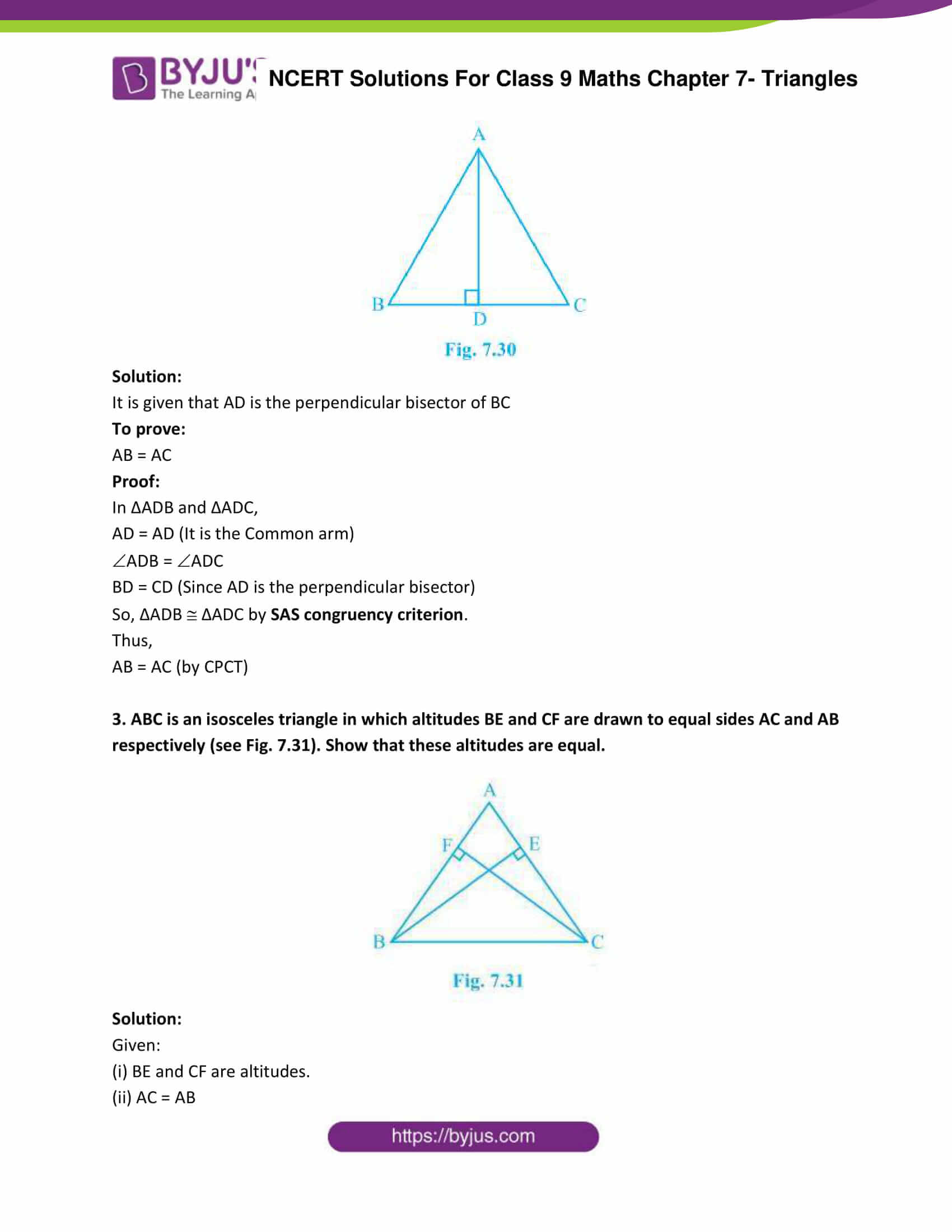 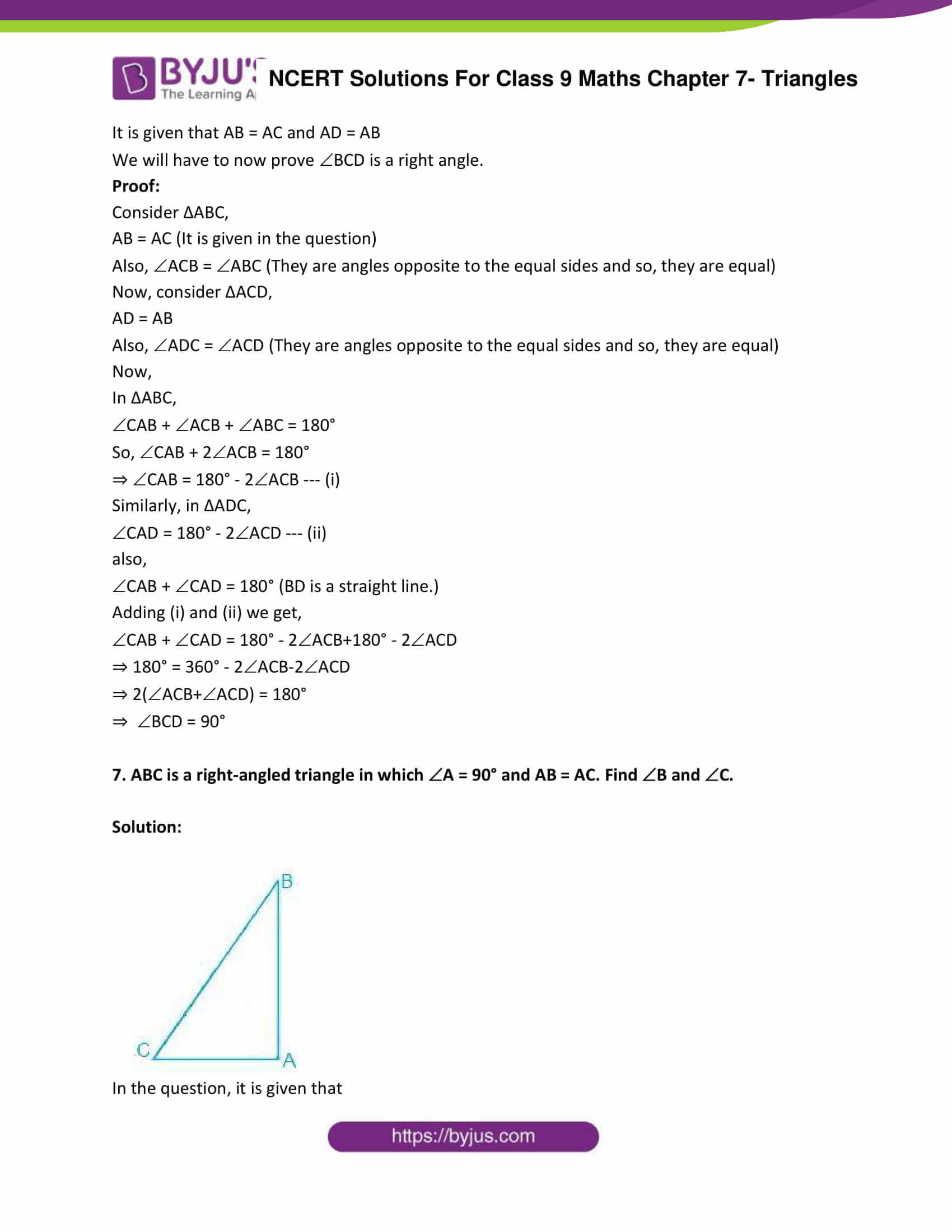 The chapter 7 consists of a total of 5 exercises. To get the solutions of other exercise visit the link below.

1. In an isosceles triangle ABC, with AB = AC, the bisectors of ∠B and ∠C intersect each other at O. Join A to O. Show that: 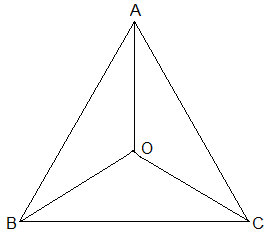 the bisectors of ∠B and ∠C intersect each other at O

∴ OB = OC (Side opposite to the equal angles are equal.)

2. In ΔABC, AD is the perpendicular bisector of BC (see Fig. 7.30). Show that ΔABC is an isosceles triangle in which AB = AC. 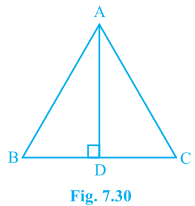 It is given that AD is the perpendicular bisector of BC

BD = CD (Since AD is the perpendicular bisector)

3. ABC is an isosceles triangle in which altitudes BE and CF are drawn to equal sides AC and AB respectively (see Fig. 7.31). Show that these altitudes are equal. 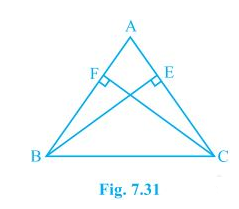 (i) BE and CF are altitudes.

Triangles ΔAEB and ΔAFC are similar by AAS congruency since 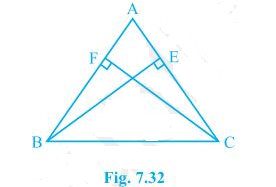 It is given that BE = CF

BE = CF (Given in the question)

(ii) AB = AC by CPCT and so, ABC is an isosceles triangle. 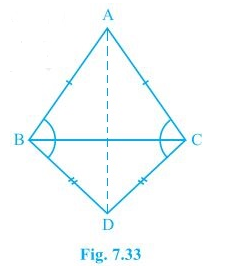 In the question, it is given that ABC and DBC are two isosceles triangles.

We will have to show that ∠ABD = ∠ACD

Triangles ΔABD and ΔACD are similar by SSS congruency since

AB = AC (Since ABC is an isosceles triangle)

BD = CD (Since BCD is an isosceles triangle)

We will have to now prove ∠BCD is a right angle.

AB = AC (It is given in the question)

Also, ∠ACB = ∠ABC (They are angles opposite to the equal sides and so, they are equal)

Also, ∠ADC = ∠ACD (They are angles opposite to the equal sides and so, they are equal)

In the question, it is given that

⇒ ∠B = ∠C (They are angles opposite to the equal sides and so, they are equal)

8. Show that the angles of an equilateral triangle are 60° each.

Let ABC be an equilateral triangle as shown below: 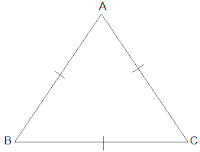 ⇒ ∠A = ∠B =∠C (Sides opposite to the equal angles are equal.)

Also, we know that

So, the angles of an equilateral triangle are always 60° each.

This exercise covers the properties of Triangles along with the two theorems as mentioned below:

These theorems can be proved by the congruence rule that students have studied in previous exercise i.e 7.1. So, go through the proofs in depth to understand it. Also, the questions provided in the exercise are based on these theorems. Students should try to solve the questions by themselves. If they get stuck somewhere then they can refer to the solutions. These solutions are provided to help students in their studies so that they get rid of all their doubts.

We hope this information on “NCERT Solution for Class 9 Maths Chapter 7 Triangles Exercise 7.2” is useful for students. Stay tuned for further updates on CBSE and other competitive exams. To access interactive Maths and Science Videos, download the BYJU’S App and subscribe to YouTube Channel.