How many bones are there in our spine?

The spine or backbone consists of 26 small bones or vertebrae. It is also known as the vertebral column.

The spine forms the main framework of the trunk. It is dorsally placed and attached to the base of the skull.

Our spine consists of twenty-six vertebrae. Actually, there are 33 vertebrae in total, but the five sacral and four coccygeal vertebrae are fused together, so taken as one each. The upper twenty-four vertebrae are separated from each other by an intervertebral disc between them. 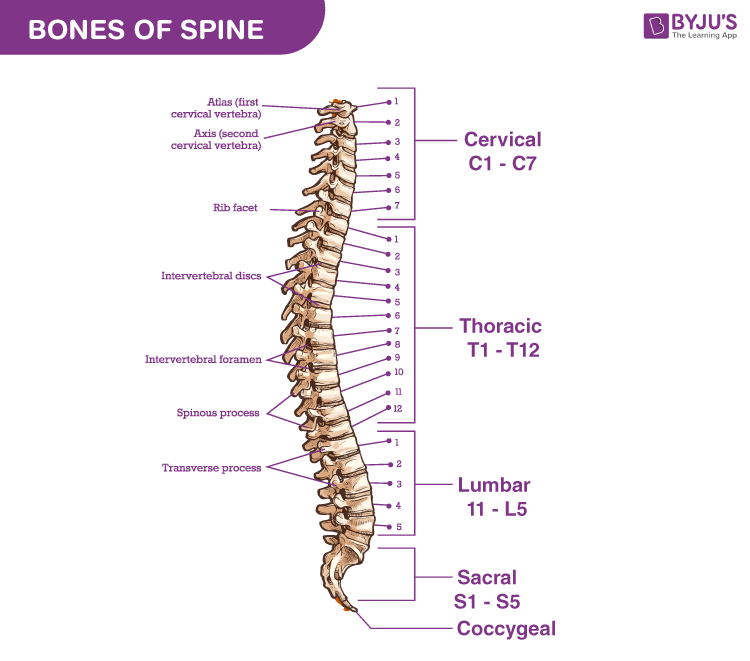 The upper twenty-four vertebrae are movable and rest are fused. Vertebrae of each region have unique structure and functions.

The spine is divided into five segments. The bones of the spine are named according to the regions, e.g. cervical vertebrae are named as C1, C2, C3, etc. Thoracic as T1, T2, etc. Lumbar as L1, L2, and so on.

The hollow cavity formed by the central portion of each vertebra forms the spinal canal. It encloses the spinal cord and provides protection.

There are various ligaments, which help in the movement and holding vertebrae together.

Injury in any of the vertebrae can result in various complications and a restricted movement like pain, numbness, tingling sensation, breathing difficulty, quadriplegia, paraplegia or paralysis, etc.

What are the 26 bones of the spine called?

What are the 5 sections of the spine?

The 5 sections of the spine from the top to bottom are:

How many spine bones are there?

There are in total 33 spine bones present in the spine of children. Some of the spine bones at the lower part get fused during development. The adult human spine consists of 26 bones.

What are the 4 main functions of the spine?

The 4 main functions of the spine are:

What is the name of the first two bones of spine?

What type of joint is present between the bones of spine?

The adjacent bones of spine are joined together by cartilaginous joints. This type of joint allows limited movement of bones.

What is the joint between the atlas and axis called?

The joint between the atlas and axis is called pivot joint.

Which bones of spine are attached to ribs?

Thoracic vertebrae are connected to ribs.