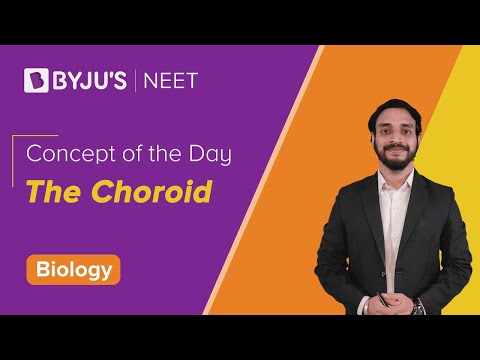 It’s structure can be typically divided into 4 layers –

This structure covers to the interior the fibrous eye’s tunic. It makes up the posterior part of the uvea, the anterior is indicated by a thick area, the ciliary zone. The two areas are discriminated by the ora serrata at the eye’s equator, which is formed as a scalloped line.

The choroid structure exhibits two faces – the internal is concave and accommodates the retina with no adherence while the external is convex, solidarized with sclera through the ciliary nerves, vessels and the lax connective tissue. The choroid comprises 2 openings – as a demarcation, an anterior one with ora serrata and the other as a posterior one which passes through the optic nerve.

For the proper functioning of the eyes and for a clear vision, it is vital to be supplied with adequate blood supply. The choroidal circulation is said to be responsible for about 85% of the blood flow in the eye, thus making it an important structure to the function of eyes. Some other functions are –

The vasculature of choroid is the main supply for the outer retina. The deterioration of the oxygen flow from the choroid to retina can cause age-related Macular Degeneration. The choroidal flow of blood can warm and cool the retina. Apart from its vascular functions, it comprises secretory cells, which are likely involved in the modulation of vascularization and in development of the sclera. Fluctuations in the choroidal thickness moves the retina backwards and forward, aligning the photoreceptors to the plane of focus.

Also check: What Is The Constituency Of The Choroid?

There are several reasons which can cause the choroid to develop certain conditions, such as genetic, sporadic or even trauma to the eye. Following are the conditions which could affect the choroid –

Choroid forms a vital structure of the eye which could be included in several pathologies. It is of immense significance provided its functions such as thermoregulation, vascularization and even in the production of the growth factors. Choroid, histologically, exhibits 5 layers – outer pigment layer, suprachoroid; two Vascular layers, Haller (external) and Sattler (internal), choriocapillaris layer and the Bruch’s membrane.

You just read about Choroid. Learn more about other related topics for NEET, at BYJU’S.