Effect of Light on Organisms

Sunlight is vital for living entities on Earth. At the time of evolutionary development, several species of animals became capable of identifying and reacting to the changes in the intensity of light and photoperiod durations as a result of the seasonal changes. This had an impact on the physiological state and even the dynamic stereotype.

Light has an impact on different aspects of life. The colouration of plumage or body, growth, reproduction, migration, diapause in different insects, fishes, birds, mammals and reptiles. Several entities find dark conditions suitable, while some others require light (hydroids).

Significance of light is also seen in the poultry reared in industrial production systems wherein the production of egg all through the year is regulated through the photoperiod alteration, in dairy cattle farming it is applicable to increase yield of milk and disease resistance while in horse husbandry to restart and prolong the reproduction period.

Light is an important factor of the microclimate of farm animal environments. The effects of lightning on animal physiology, morphology and behaviour has been indicated in many studies. Light duration and intensity are of immense importance for the life span and the health of cows. 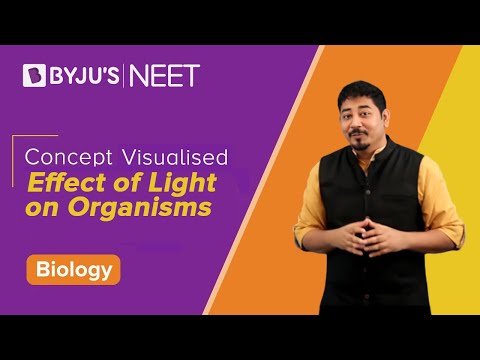 Behavior of Entities Towards Light

Role of Light on Photosynthesis

Plants are the primary producers in the ecosystem. They perform photosynthesis, the vital biochemical process through which plants manufacture food and give out oxygen. Photosynthesis occurs in leaves mainly and special cell structures referred to as chloroplasts, which have chlorophyll contained in it. Chlorophyll absorbs solar energy and carries out the phenomenon.

Colour of light has a role to play too. Plants use a particular light form only for photosynthesis. The pigment chlorophyll absorbs red, violet, blue light rays. This phenomenon occurs more in blue light rays, less in red light and not in green light at all.

Blue is absorbed the best which indicates the highest rate of photosynthesis, post this comes the red light. Plants cannot absorb green light and hence cannot be used in photosynthesis. Chlorophyll imparts green appearance as it absorbs red and blue light thus causing these colours to be unavailable to the naked eyes. Green light is not absorbed which ultimately reaches the eyes, making chlorophyll appear green.

Role of Light on Dormancy in Animals

Aestivation – in animal dormancy, it is a state of occurring in summer which is distinguished by the inactivity and a lowered metabolic rate which is entered responding to high temperatures and arid conditions. It occurs at the times of dryness and heat, hot dry season.

Hibernation – it is a state of metabolic depression and minimal activity. This is a seasonal heterothermy which is distinguished by a low body temperature, slower heart rate and breathing and low rate of metabolism. Most commonly, it occurs in winter. They function to conserve energy in the event of unavailability of enough food. Endothermic animals in this state reduce its metabolic rate and hence its body temperature. Ectothermic animals too experience periods of metabolic dormancy and suppression that in several invertebrates is called diapause.

Role of Light on Marine Ecosystem

Marine ecosystems are aquatic environments having high levels of dissolved salts, for instance that are found in or in proximity to the ocean. Such ecosystems are characterized by its unique abiotic (amount of sunlight in ecosystem, oxygen content and quantity of nutrients dissolved in water, temperature, proximity to land, depth) as well as biotic factors (animals, plants, microbes).

Solar energy or sunlight is a vital abiotic factor for marine ecosystems. In fact, the importance is so that experts classify three sections of marine ecosystem by the amount of light it receives. The uppermost layer of a marine ecosystem is the euphotic zone which extends down as low as 200 m below the surface at such a depth, there is enough light for regular photosynthetic activity. This is the zone which inhabits most of the marine life.

Below this is the dysphotic zone, wherein sunlight is still available, facilitating some photosynthesis. Below this zone is the aphotic zone, which does not obtain any sunlight.

You just read about the effects of light on organisms in different environments. Learn about other related concepts important for NEET at BYJU’S.