Locomotor disability restricts movement of limbs (legs and arms). It limits the movement from one to another place. Generally, it is taken as a disability which is associated with muscles, joints and bones. It causes difficulty in a person’s movement such as picking, walking, holding something etc. 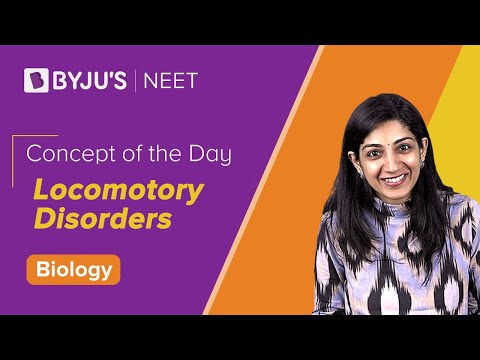 There are a range of disorders related to movement and locomotion. Some of these are discussed in brief below:

The disorder is distinguished by rapid fatigue and weakness of any of the muscles under voluntary control. It is caused by errors while transmitting nerve impulses to the muscles. It takes place when the normal communication between the muscles and the nerves is interrupted. This happens at the neuromuscular junction which is the site where the nerve cells connect with the muscles it controls.

In this condition, the muscles gradually tend to waste away and eventually become immobile. In the last stages, the jaw muscles too do not function and are hence unable to eat. In this chronic autoimmune disorder, the antibodies destruct the communication between the muscles and nerves which leads to the weakness of skeletal muscles. It affects the voluntary muscles of the body, particularly those which govern the mouth, eyes, limbs and throat.

Treatment can help in relieving symptoms and signs such as double vision, weakness of leg or arm muscles, drooping eyelids, difficulty swallowing, chewing, in speech and breathing. Although this disease can affect people with any age, more commonly, it is seen in young women and in older men (older than 60).

It is a group of inherited diseases which causes the progressive muscle weakness and loss of muscle mass. The mutations interfere with the production of proteins which are essential for the formation of healthy muscles. This weakness and damage is as a result of lack of proteins referred to as dystrophin vital for normal functioning of the muscles. In the event of absence of this protein, problems in swallowing, walking and muscle coordination can develop.

Hence, it is caused by gene mutations which are involved in making muscle proteins. Such mutations can spontaneously occur in early development or can be inherited. These could be autosomal recessive, X-linked recessive, or even autosomal dominant. Some genes are involved in producing proteins which protect the muscle fibers. This disorder takes place when one of these genes is defective. It can occur at any age, mostly diagnosis occurs in childhood. There are several kinds of muscular dystrophy. Each form of muscular dystrophy is as a result of a genetic mutation specific to that form of disease. Most of such mutations are inherited.

It is a disorder of elevated neuronal excitability normally linked with hypocalcemia. It is distinguished by the contraction of distal muscles of the hands and feet linked with tingling around the mouth and distally in the limbs. This involuntary contraction of muscles could be as a result of disorders which increases the frequency of action potential of the nerves or muscle cells innervating it.

The general cause of tetany is a calcium deficiency. Hypocalcemia is said to be the chief cause of tetany. Excess phosphate could also stimulate spasms. Tetany could also be due to the underfunctioning of the parathyroid glands, low levels of carbon dioxide by changes in the albumin binding calcium so much that the ionized fraction of calcium gets decreased. A common cause for low levels of carbon dioxide is hyperventilation. Tetany could also be due to low magnesium levels. There are other reasons too which could trigger tetany.

In simple words, arthritis is the inflammation of the joints. This could be inflammation of one joint or multiple joints. Arthritis are of several types with a range of causes and treatments. Generally, it is the tenderness and swelling of one or more joints. It’s main symptom is stiffness and joint pain which aggravates with age. Most commonly occurring forms are osteoarthritis and rheumatoid arthritis.

Osteoarthritis causes disintegration of the cartilage which is a slippery, hard tissue covering the terminals of bones where joints are formed. On the other hand, Rheumatoid arthritis is a disease wherein the immune system targets the joints starting with the lining of the joints.

Osteoarthritis – involves the wear and tear damage to the cartilage of joints. The cartilage cushions the terminals of the bones enabling almost a frictionless joint motion. However, sufficient damage can lead to the bone directly grinding on the bone. This causes restricted movement and pain. This type of wear and tear can take place for several years or it could be fastened by an infection or a joint injury. Also, it can affect the complete joint leading to changes in the bone and the deterioration of the connective tissue which attaches muscles to bones and holds the joints together. It may also cause the inflammation of the lining of the joints.

Treatments vary based on the type of arthritis. The main aim of arthritis treatments are to decrease the symptoms and improve quality of life.

Bone is a living tissue which is replaced and broken. This condition takes place when the creation of new bones is not in sync with the loss of the old bone. It is a condition affecting bones. Its name comes from Latin which means “porous bones”. The interior of a healthy bone has several tiny spaces such as a honeycomb. This condition increases the size of such spaces which causes bones to lose density and strength. Additionally, the exterior of the bone grows thinner and weaker.

Those with osteoporosis are at a high risk of bone breaks or fractures while carrying out routine activities. This condition causes the bones to go brittle and weak. Even a mild fall or stress, a bend can lead to a fracture. Most of these fractures commonly are seen in the spine, wrist or hip. A healthy diet, some weight-bearing exercises can help in preventing bone loss or strengthen the weak bones which already exist.

This condition softens bones as a result of deficiency of calcium. Absorption of calcium is based on the availability of vitamin D. Also, women are prone to this condition post menopause. The female hormone estrogen mobilizes calcium and passes it to the bones. Lack of estrogen causes bones to break and crack.

It is a common form of arthritis causing swelling, intense pain and stiffness in the joints. Usually, it affects the joints in the big toe. It is caused by excess uric acid in the bloodstream. Uric acid is a result of the product of metabolism of proteins. Such attacks quickly appear and return at regular intervals. It gradually harms tissues in the sites of inflammation and could cause excruciating pain.

Signs and symptoms of gout arise as a result of the formation of crystals or uric acid in the joints. Such attacks of gout usually take place with no warning in the middle of the night, most of these cases of gout are treated with particular medications.

This was a brief on Locomotory disorders. Explore more on related topics for NEET at BYJU’S.