We differentiate the elements around us based on their physical properties such as malleability, phase, texture, colour, polarity, solubility, etc. But as we know, another very important classification of elements is done on the basis of their conductivity of electric charge, i.e. conductors and insulators.

If we perform a simple experiment with a battery and a small LED bulb, we will notice that when the electric circuit between the battery and the bulb is completed using a plastic or a cotton thread, the bulb doesn’t glow. Whereas if we perform the same experiment with the help of a metallic wire such as copper, the bulb starts to glow. This indicates that some of the elements enable the transfer of charge from the battery to the bulbs, while others do not. The basis of the classification of such elements is their electrical conductivity. Let us learn more about conductors and insulators in this comprehensive article.

Metals, humans, and earth are all conductors. This is the reason why we get electric shocks!

Graphite, the human body, and the earth are good conductors of electricity. Some of the common conductor examples include metals such as: 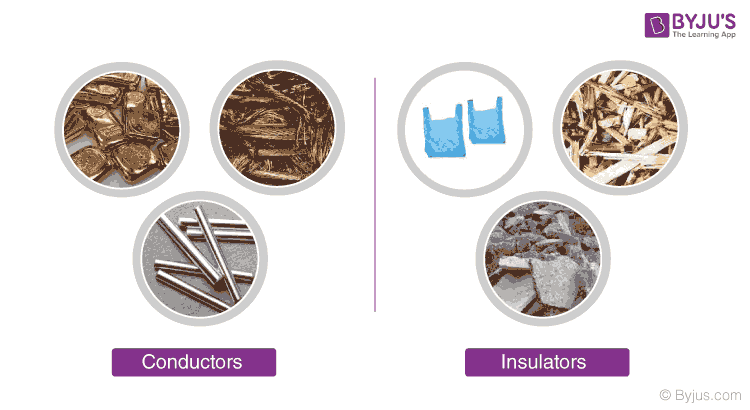 Insulators are materials that hinder the free flow of electrons from one particle of the element to another. If we transfer some amount of charge to such an element at any point, the charge remains at the initial location and does not get distributed across the surface. The most common process of charging of such elements is charging by rubbing (for some elements, with the help of suitable materials).

Test your knowledge on Conductor and insulator
Q5