Interior of the Earth

The crust, the mantle, and the core are the three layers that make up the earth. The core only forms 15 per cent of the Earth’s volume, whereas the mantle occupies 84 per cent. The remaining 1 per cent is made up of the crust. From the picture, we see that at the centre of the Earth lies the core, then there is the mantle and finally the crust.

Understanding the Core, Mantle and Crust

The centre of the Earth is made of a dense metallic core. It is due to the metallic nature of the Earth’s core, a magnetic field is present on the planet. A lot has been understood about the features of the crust by documenting the travel time of the seismic wave generated by earthquakes through different layers of the Earth. The Earth’s core is composed of a solid inner core and a liquid outer core. We know this because S-waves stop at the inner core. The strong magnetic field is generated by convection in the liquid outer core.

There are two important things that we know about the mantle: 1) that it is made of solid rock 2) it is hot. Scientists know the structure of the mantle because of the heat flow, seismic waves and meteorites. Heat flows through the Earth in two ways: convection and conduction. Conduction is a heat transfer method that occurs only through rapid collisions of atoms. This can happen only when the material is solid. The nature of heat is to flow from warmer to cooler places until an equilibrium of temperature between the two medium is reached. The mantle is hot because of the heat conducted from the inner core of the earth.

The bottom layer of mantle material is heated by the heat emanated by the core, due to this the particles move rapidly, decreasing their density and causing them to rise. A convection current is originated due to the rising current. On reaching the surface, the warm material spreads horizontally. The material rapidly cools down because it is no longer near the proximity of the core. Eventually, it becomes cool and dense enough to sink back down into the mantle. At the bottom of the mantle, the material traverses horizontally and the core heats it up. It reaches the location where warm mantle material rises, and the mantle convection cell is complete.

The outer surface of the Earth is known as the crust and it is a cold, thin, brittle outer shell made of rock. There are two types of crust each with its own distinctive physical and chemical properties: a) Oceanic Crust b) Continental Crust.

The oceanic crust is made of magma that erupts on the surface of the seafloor to create basalt lava flows. It sinks deeper down and creates intrusive igneous rocks. Continental crust is composed of many types of metamorphic, igneous and sedimentary rocks.

Here is a video explanation of the interior of the Earth with animations! 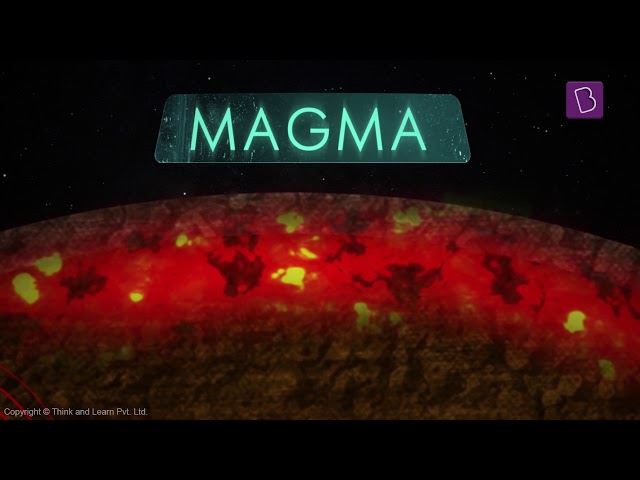 Frequently Asked Questions on Interior of the Earth

Who studies the interior of Earth?

What is the inside of Earth made of?

The Earth is made out of many things. Deep inside Earth, near its centre, lies Earth’s core which is mostly made up of nickel and iron. Above the core is Earth’s mantle, which is made up of rock containing silicon, iron, magnesium, aluminium, oxygen and other minerals.

What per cent of the Earth is the inner core?

The three main layers of Earth include the crust (1 per cent of Earth’s volume), the mantle (84 per cent), and the core (inner and outer combined, 15 per cent).

How do we know what Earth’s interior looks like?

Which is the hottest layer of Earth?

The inner core is the hottest layer.