In this article, let us know about the motion in combined electric and magnetic fields. A cyclotron is a machine used to accelerate charged particles or ions to high energies.

To enhance the energies of charged particles, cyclotron uses magnetic as well as electric fields. It is called crossed fields since the magnetic and electric fields are perpendicular to each other. 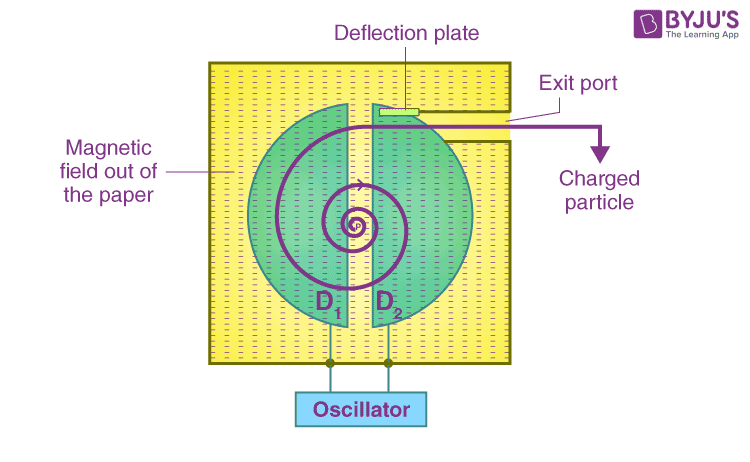 The image above represents the cyclotron. A cyclotron consists of two flat and hollow semicircular metal disc-like containers represented as D1 and D2. These containers are separated by a narrow gap. Disc-like containers connected to a high-frequency oscillator have the capacity to generate an alternating voltage. Alternating electric field is created between D1 and D2 as well from D2 to D1. The charged particle in the containers is accelerated when it passes through the gap between the metal containers.

When a charged particle moves into a hollow semicircular metal disc-like container, it moves in a circular path and with a constant speed. Due to the shielding effect, the electric field is zero inside the container. The frequency of the cyclotron is independent of the speed of the charged particle and the radius of the circular path. These machines are used to bombard nuclei and are used to study nuclear reactions.

Read more about Electricity and magnetism.

Stay tuned with BYJU’S for more such interesting derivations in physics, chemistry and maths in an engaging way with video explanations.

Cyclotron is a machine that is used to accelerate the charged ions or particles to high energies.

2. Strength of the electric field is proportional to?

3. What do the Van Allen radiation belts in space around the earth consist of?

They consist of energetic charges trapped in the magnetic field of the earth.

4. Which fields are used by cyclotrons?

Cyclotrons use both electric and magnetic fields.

5. What is a mass spectrometer?

Mass spectrometer is a device that finds its application in separating the charged particles based on their charge to mass ratio.