The AP SSC (Andhra Pradesh board) Class 10 Question Paper Science Paper 2 2015 with solutions found in downloadable PDF format is useful for students who are preparing for the exams. This AP SSC Class 10 exam question paper helps students to score well in the Science exams. Students can download the PDF formats of the solved or even the unsolved question paper with just a click. Students can refer to the solutions to check their progress in exam preparations. Find in this article below, the clickable links to download the papers.

AP SSC Science, a very interesting subject to score marks, requires hard work and commitment from the students. They will have to master the entire concepts of the subject, if they wish to score good marks in the exam. Scoring high marks in the AP Board Class 10 Science exam is easy, if a student knows well the complex formulas and equations of Class 10 Science. In order to prepare more effectively for the exams, students are advised to practise the previous year papers of AP Board Class 10 Science. It will also throw light on the question paper design, marking scheme, exam pattern and so on. These solutions are the best resource for a student to gauge the difficulty level of the questions likely to be asked in the board exams. 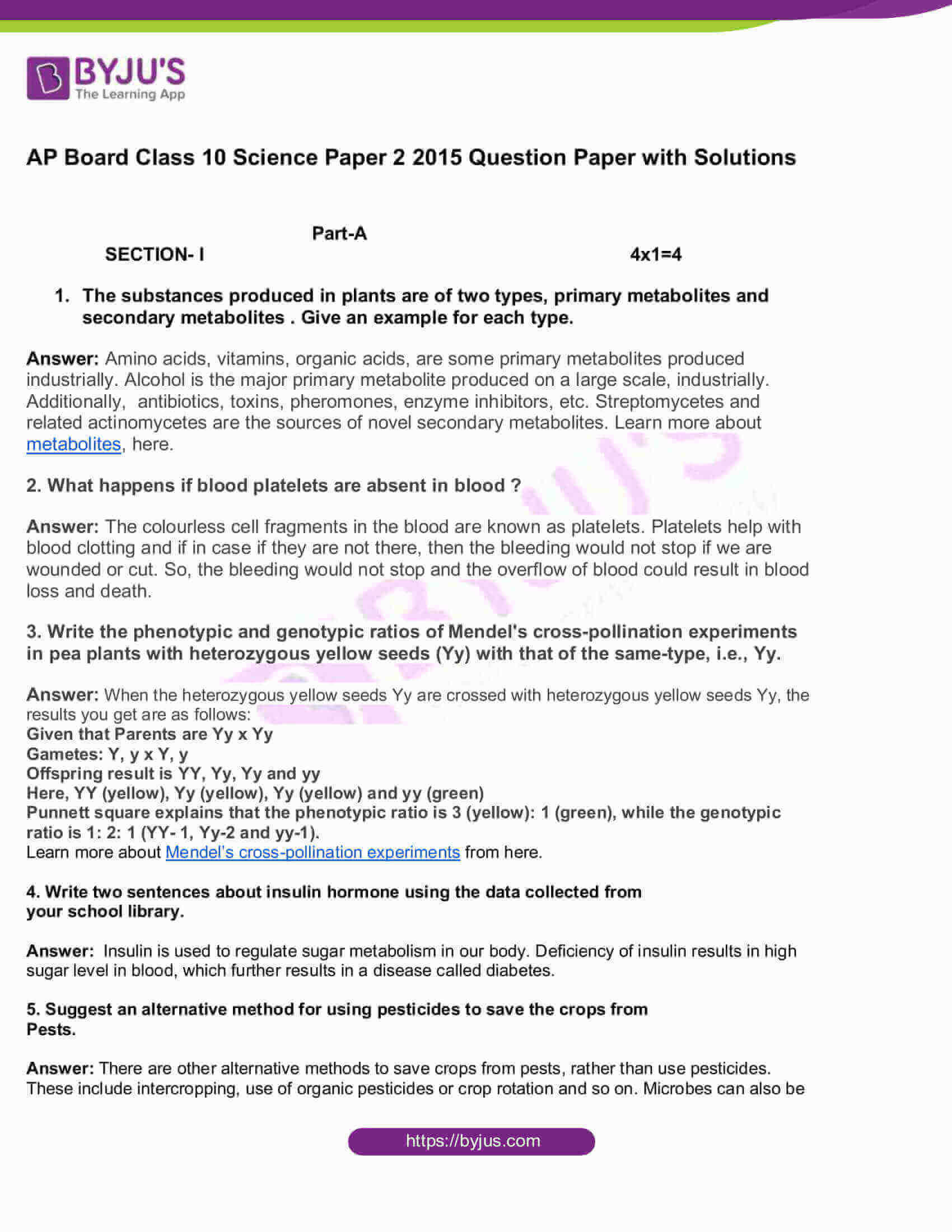 2. What happens if blood platelets are absent in blood ?

3. Write the phenotypic and genotypic ratios of Mendel’s cross-pollination experiments in pea plants with heterozygous yellow seeds (Yy) with that of the same-type, i.e., Yy.

Given that Parents are Yy x Yy

Answer: Insulin is used to regulate sugar metabolism in our body. Deficiency of insulin results in high sugar level in blood, which further results in a disease called diabetes.

5. Suggest an alternative method for using pesticides to save the crops from

Answer: There are other alternative methods to save crops from pests, rather than use pesticides. These include intercropping, use of organic pesticides or crop rotation and so on. Microbes can also be used to destroy the pests. Other biological methods that can be adapted include genetic control, integrated pest management and more.

6. By taking two plants of your surroundings as examples, explain how they

protect themselves against the animals which eat them.

Answer: Poison Ivy and Rose plant are examples of two plants that protect themselves against animals that eat them. Poison Ivy, normally releases a kind of oil that has a peculiar kind of smell, that keeps the animals like rabbits away from it. Meanwhile, rose plants have a long needle like structures that are pointed, known as thorns. These thorns help to keep away predators or animals that might feed on the plant. Grazing animals learn to keep away from rose plants, as the thorn might prick and damage their cells.

7. Differentiate the reactions that take place in presence of light and the reactions, which do not require light in photosynthesis .

Answer: Know more about the reactions in photosynthesis that take place in the presence of light or which do not require light. Learn about light vs dark reactions.

8. Define and explain variations with examples.

Answer: Skin or hair colour as well as blood type are all examples of genetic variations. There are so many other examples such as green, red or capsicum or the blue or white butterfly and so on. Learn more about variations from here.

9. What questions will you ask a doctor to know about endocrine glands?

Answer: Below mentioned are few questions to ask the doctor to know about endocrine glands:

1) What are the Endocrine glands?

2) Where is their location?

3) What are their functions?

4) What happens when an endocrine gland fails to function properly? Which are the common diseases resulting from this?

5) How to keep the endocrine system healthy?

6) What are the food items that ensure proper functioning of the glands?

7) Is diabetes a cause of hormonal imbalance?

8) What are the precautions to be taken?

10. In Meiosis, the chromosome number in the daughter cells are reduced to half

that of their parent cells. Guess, what would happen, if the reduction of chromosome number is not done?

11. Using the data collected by you, from the internet and other sources, make a report on coagulation of blood.

Answer: If any damage takes place in the blood vessels, then it sends out signals to the platelets. The platelets, then rush to the site of damage and form clots to repair the damage. The activated platelets stick together to form a platelet plug, which in turn activates the coagulation factor. If the blood keeps on flowing, it could result in weakness caused by loss of blood and haemorrhage, which may result in death. Vitamin K and Calcium ions are beneficial for the proper functioning of the coagulation factor. Meanwhile, coagulation factors are the proteins present in blood plasma that helps in converting fibrinogen to fibrin, that strengthens platelet plug. Know more about blood coagulation from here.

12. In the food pipe, the food bolus is propelled into the stomach by peristaltic movement. Represent this action with a diagram.

Answer: In the food pipe, the food bolus is propelled into the stomach by peristaltic movement. For details about peristalsis and images, check this.

13. How do you feel when you realize that plants respond to the stimuli of their surroundings?

Answer: Plants cannot move as humans do, still they move their leaves in response to some stimulus. See from here, the plant’s immediate response to stimulus and about the tropic movements in plants.

14. Rahul remarked that different human activities are responsible for global warming. What might be the reasons for his statement?

Answer: Rahul remarked that various human activities are responsible for global warming. This statement is based on certain undisputed facts, which have been known to be the reasons for global warming. Humans use vehicles a lot and its increased use has led to global warming. It is seen that humans also use devices such as refrigerators and air conditioners, which release hydrocarbons and freons that further add to global warming. Global warming is also said to be the cause of burning fossil fuels. The causes like deforestation, industrialisation and urbanisation are all human-made.

15. Answer the following questions by observing the diagram showing the experiment

(A) What will you prove by this experiment?

(B) What apparatus do you use in this experiment?

(C) What would be the results if the experiment is done in shadow?

(D) What will you do to obtain results from the experiment? Answer: (A) This experiment proves that oxygen is released during photosynthesis

(C) If the experiment is done in shadow, there will be no change to the water level of the test-tube. No photosynthesis takes place nor are any bubbles formed.

(D)A burning splinter kept near the mouth of the test-tube burns brightly.

16. Even though both are oxidation processes, combustion and respiration are different in many aspects. Explain those differences.

Answer: In a combustion reaction, the energy is released all at once and the sugar melts, chars and then burns later and generates flame. However, no intermediates were formed and it occurs in the absence of water. External heat is absorbed during combustion and enzymes are not required. Meanwhile, during the oxidation process, the energy is released in sectoral stages and no charing happens when sugar is oxidised. This reaction also produces other intermediates and occurs in the presence of water. Certain amount of the energy is stored in the body and utilised by the body. Enzymes are required for the process.

17. Explain how plants get water from soil through their root hairs.

Answer: Roots hairs of the plants have an important role to play in the absorption of water via osmosis. Hair roots normally grow out into the space between the soil particles and they are surrounded by moisture. The soil water is more dilute than the cell sap that the root hair contains, so water will pass into the vacuole of the root hair by osmosis. Water is transported in the plants with the help of conductive tissues and individual cells of the vascular system. Water moves along the water potential gradient and enters the root hairs and xylem through either apoplast or symplast pathways. This is how the water is carried from the roots to the stem and other parts of the plant.

18. Write about respiration in mangroves that grow in marshy lands.

Answer: Mangroves are a special type of vegetation found in the intertidal regions where freshwater and saltwater intermixes, in the bays, estuaries, creeks, and lagoons. These salt-tolerant varieties of plants can survive in harsh conditions. Mangroves have marshy lands and are full of mud. Mud lacks oxygen, so the plants in the mangrove areas have erect roots called pneumatophores, that help with respiration. These plants are also adapted to develop aerial roots above the soil surface, which helps in gaseous exchange.

(A) Hunger generating signals reach the brain when the stomach gets empty.

(B) When your stomach is filled with food, you feel you don’t need food any more.

(C) In severe cold and cough, one cannot feel the taste of the food.

(D) We cannot identify the taste of a grapefruit, when it is placed on the tongue.

Answer: 19. (A) The chemical Gherlin secreted in the walls of your stomach, thus increasing your appetite.

(B) Alternatively, when your stomach is full the hormone Leptin is secreted, which helps to suppress hunger.

(C) During cold, olfactory receptors are blocked so you do not feel the taste of food.

(D) Bitterness in grapefruits can be ascribed to Naringin, which along with certain other substances in grapefruits inhibit the activity of certain enzymes in the body, including the tongue, thus making it difficult to identify its taste.

20. Forest is a renewable resource. But, each year, the Earth loses about 36 million acres of forest. In this type of situation, what suggestions do you give to save forests from turning into non-renewable resources ?

Answer: Given below are some of the suggestions, that save forests from turning into non-renewable resources:

21. Fossils are the precious evidence preserved by nature to help us know about ancient life forms. Write the information you collected about fossils.

Answer: Fossils are the evidence for ancient life forms and habitats that have been preserved using natural processes. These provide information about the organisms that lived in the past. Paleontologists also adopt carbon dating methods to determine the age of a fossil. Fossils with the help of inactive chromosomes help to convey to us the details like genetic conditions, hereditary characters and so on. It also goes on to help us determine detailed information about lifestyles, food habits, shape of body and more. We can also determine the evolution of organisms with the help of fossils. Learn more about types of fossils, as well.

22. All the living things have the right to live on this earth along with us. Prepare slogans to promote awareness in public about the conservation of biodiversity.

Answer: Here are some slogans to promote public awareness about conservation of biodiversity:

1) “Each of us is responsible for everything to everyone else.”

2) “Don’t let species go extinct, In this world we are linked”

3) “It is that range of biodiversity that we must care for – the whole thing – rather than just one or two stars.”

4) “Biodiversity Is The Way, So Don’t Let Nature Go Astray”

23. Draw a diagram of a Nephron, and explain its structure.

Answer: Find out about the structure of Nephron and its diagram, from here.

24. Answer the questions by observing the diagram : (A) What are the four main parts of a flower?

(B) Which part produces gametes?

(C) Which part helps in pollination?

(D) Which part protects the flower during its bud stage?

(E) Which part will turn into a fruit in the future?

(B) The parts, Androecium and Gynoecium produce gametes

(C) The parts that help in pollination include Petal or Corolla

Learn more about the parts of the flower and its functions, from here.