Life is a sense of balance among several activities. These activities include growth, nutrition, reproduction, excretion, etc. Both animals and plants are two different forms of living organisms. Therefore the pathway, which they follow for numerous life processes are also different.

For instance, animals can run away from their predators, but plants cannot. Plants have their own mechanism to counteract the danger they face.

Nervous system and endocrine system are the two different systems in the animal body which is involved in balancing and controlling different types of activities. In the case of plants, they are completely devoid of the nervous system and other special organs. However, plants adapt to retort to various stimuli by few movements. The response can be a slow process such as tropism or a rapid movement, such as semi-monastic movement. Sensitive plants exhibit semi-monastic movement while responding to a touch. Hence, we can categorize plants into two types on the basis of their movements: Tropic movements and Nastic movements.

Also Read: Movement Due To Growth

Let us see different types of tropic movements in plants and how plants control and coordinate in brief.

Discussed below are a few types of tropism.

Plants grow towards or away from the light, the type of tropism in the response to light is called phototropism. In general, the stems usually show positive phototropism, while roots show negative phototropism. Leaves also positively respond toward the source of light.

There are few chemical substances, which are actively responsible for bringing a curvature movement in plant organs. When plants grow in response to certain chemicals, this type of response is known as chemotropism. Few examples of chemotropic movements are the conversion of a flower into fruit, the growth of a pollen tube down the style during fertilization, movement of tentacles in Drosera, etc.

The growing or developing movements made through plants in response to contact with a solid object are called thigmotropism. These type of movements are usually seen in tendrils and twiners. This movement is also referred to as Haptotropism.

It is the form of a tropic movement in which a plant or a part of the plant responds to the changing atmospheric temperature. For example, this type of movement is usually seen in the plants of Rhododendron. Here leaves starts twisting or bending in response to cold temperatures. 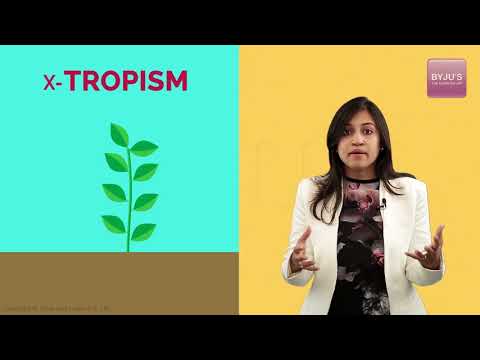 Learn more about tropic movements in plants, its types and other related topics at BYJU’S Biology

What is Tropic movement?

Directional movement exhibited by plants in response to a stimulus is referred to as tropism.

What are examples of Tropic movement?

How many types of Tropic movements are there in plants?

There are 6 known types of tropic movement observed in plants. They are: Phototropism, Gravitropism, Chemotropism, Thigmotropism, Thermotropism and Hydrotropism.

What are tropic and Nastic Movements?

Test your Knowledge on Tropic Movements In Plants !
Q5