“Photropism is the ability of a plant to grow in the direction of light.”

“Photo” means light, and “tropism” means turning. Phototropism is the phenomenon by which the plant bends in the direction of light. Light is required by the plants to stimulate energy production by the process of photosynthesis.

The hormone called auxins that are present in the cells, respond to photosynthesis and react to produce more protein and generate energy for the plant.

Almost all plants respond to photosynthesis in order to get more nutrition and energy. The stem and shoots usually react to positive phototropism by turning towards the sunlight, while negative phototropism takes place in the roots which turn away from the source of light. Here gravitropism or geotropism plays a major role in their growth.

Also Read: What is Photosynthesis 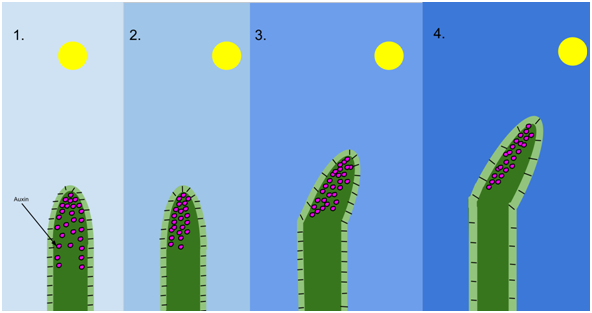 The following experiments were performed by different scientists in order to explain the mechanism of phototropism.

In 1880, Charles Darwin, with the help of his son researched phototropism on canary grass and oat coleoptiles and recorded his observations in the book ‘The Power of Movement in Plants’. They observed the bending of seedlings towards sunlight.

They demonstrated by covering the tips of the oat coleoptiles which prevented it from photosynthesis. Simultaneously, when they covered the lower portion of these coleoptiles, they turned phototropic. He concluded from this and several other experiments that the tip of the grass (called coleoptiles) have a strong sense of light and thus bend towards its source, while the middle section activates protons, thus decreasing the pH in the cells. This act acidifies the cell wall, activating an enzyme known as expansions which break down the cell wall thus making it less rigid. Reflecting on Darwin’s experiment with oat coleoptiles, Boysen Jensen in 1913 experimented on seedlings by cutting off the tip and replacing it with a thin layer of gelatin between the tip and the cut stem. This did not prevent the stem to curve towards the source of light.

Next, he placed a small mica sheet below the tip of coleoptiles on the shaded side. The new way did not prevent developing a curvature. When the scientist placed the same mica sheet on the illuminated side, there was no curvature.

He concluded that a flow of material substance (later named as auxins) which passes through gelatin and mica sheet was the cause behind the curvature.

The mechanism of phototropism is as follows:

Stay tuned with BYJU’S to learn more in detail about Phototropism, its definition, mechanism, discovery and examples.

Test your knowledge on Phototropism
Q5