There are many forms of life on earth with a multitude of features and characteristics. Yet, when we look at the microscopic level, every single life on earth is composed of the same basic, structural and functional unit of life – the cell.

What is a Cell Wall?

A cell wall is defined as the non-living component, covering the outmost layer of a cell. Its composition varies according to the organism and is permeable in nature. The cell wall separates the interior contents of the cell from the exterior environment. It also provides shape, support, and protection to the cell and its organelles. However, this cellular component is present exclusively in eukaryotic plants, fungi, and few prokaryotic organisms.

Pictured: A cross-section of a plant cell with the cell wall highlighted

As stated above, fungi also possess cell walls, but they are made up of chitin, a derivative of glucose which is also found in the exoskeletons of arthropods. And just like the cell walls in plants, they provide structural support and prevents desiccation.

Prokaryotic organisms such as bacteria also contain cell walls. However, they are chemically different from the cell wall found in plants and fungi. The prokaryotic cell walls are composed of large polymers known as peptidoglycans. Cell walls in prokaryotes serve as a form of protection and prevent lysis (bursting of the cell and expulsion of cellular contents). Structurally, prokaryotic cell walls consist of two layers:

Eukaryotic cells possess a definite nucleus along with a distinct nuclear membrane. It also contains membrane-bound organelles not found in prokaryotic cells. Another important point to note is that the cell wall is absent in other eukaryotic organisms such as animals, only plants possess cell walls.

The cell wall is the outer covering of a cell, present adjacent to the cell membrane, which is also called the plasma membrane. As mentioned earlier, the cell wall is present in all plant cells, fungi, bacteria, algae, and some archaea. An animal cell is irregular in their shape and this is mainly due to the lack of cell wall in their cells. The compositions of the cell wall usually vary along with organisms.

The plant cell wall is generally arranged in 3 layers and composed of carbohydrates, like pectin, cellulose, hemicellulose and other smaller amounts of minerals, which form a network along with structural proteins to form the cell wall. The three major layers are: 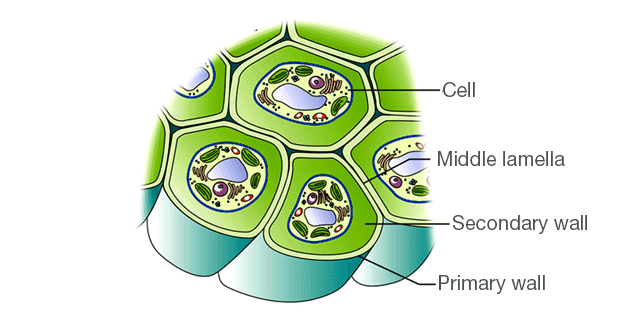 The primary cell is situated closest to the inside of the cell and is the first-formed cell wall. It is mainly made up of cellulose, allowing the wall to stretch for the purpose of growth. Several primary cells contain pectic polysaccharides and structural proteins. It is also comparatively permeable and thinner than the other layers.

The middle lamella is also the outermost layer and it acts as an interface between the other neighbouring cells and glues them together.  This layer primarily consists of pectins. However, other substances such as lignin and proteins can also be found.

The secondary cell wall is formed inside the primary cell wall once the cell is completely grown. Some types of cells (especially the cells of xylem tissues) consist of cellulose and lignin and these provide additional rigidity and waterproofing. Also, this layer provides the characteristic rectangular or square shape to a cell. It is also the thickest layer and permits permeability.

Pictured: The above illustration shows the various components of a plant cell wall

What is the Function of the Cell Wall

The cell wall is an integral component of the plant cell and it performs many essential functions. Following are some of the major cell wall functions observed:

A cell wall is defined as a rigid, external layer that is specifically designed to provide structural support and rigidity. It also keeps the interior components of the cell intact and safe from the external environment.

2. What is the function of the cell wall?

The main function of the cell wall is to provide structural strength and support, and also provide a semi-permeable surface for molecules to pass in and out of the cell.

3. Name other organisms besides plants to have a cell wall.

Besides plants, prokaryotic organisms such as bacteria sport a cell wall. However, its cell wall is made up of peptidoglycan, which is composed of sugars and amino acids. Fungi also possess cell walls and they are composed of chitin, a complex carbohydrate.

5. Why are bacterial cell walls important?

The cell wall in bacteria is essential for survival as it helps to keep the contents of the cell intact. Antibiotics usually work on this principle by targeting the bacterial cell wall and causing lysis. This leads to the expulsion of cellular contents and the eventual death of the cell.