Kingdom Monera belongs to the prokaryote family. The organisms belonging to this kingdom do not contain a true nucleus. These are the oldest known microorganisms on earth. Their DNA is not enclosed within the nucleus. 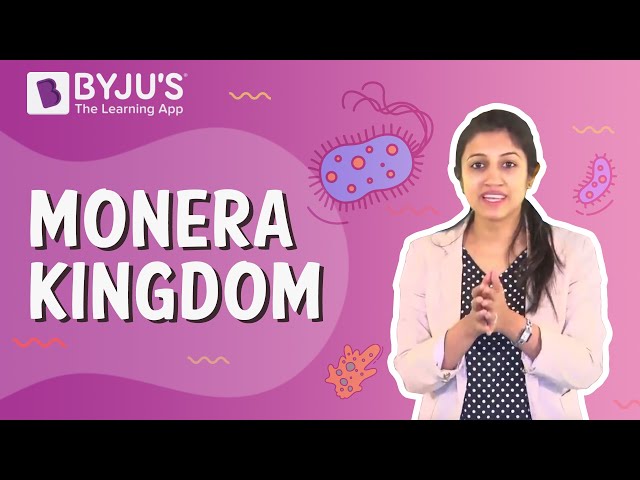 They are unicellular organisms found mostly in a moist environment. They are found in hot springs, snow, deep oceans, or as parasites in other organisms.

The monerans do not possess any membrane-bound organelles.

Let us go through the kingdom monera notes to explore the characteristics and classification of monera.

The important characteristics of Monera are mentioned below: 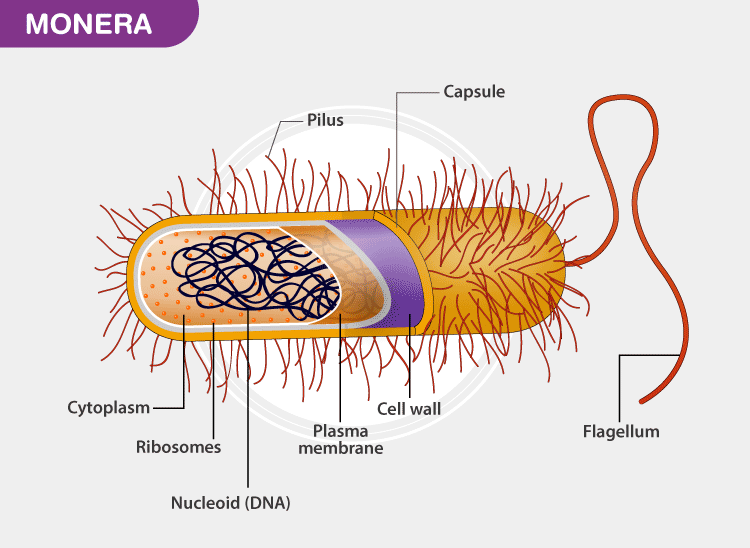 Bacteria are microscopic organisms that can survive in diverse environments. They can be beneficial as well as harmful. They possess a simple structure without a nucleus and a few cell organelles.

The bacteria are surrounded by two protective coverings- the outer cell wall and the inner cell membrane. Some bacteria are also covered by a capsule. Few bacteria like Mycoplasma do not have a cell wall.

Short whip-like extensions known as pili surround the surface of the bacteria. The long whip-like structures are known as flagella.

Cocci- Bacteria are spherical or oval in shape. These can be micrococcus (single), diplococcus (in pairs), tetracoccus (in fours), streptococcus (in chains), and staphylococcus (in clusters like grapes)

Bacilli- These are rod-shaped bacteria with or without flagella.

Vibrios- These are comma or kidney-shaped small bacteria with flagella at one end.

Spirillum- These are spiral or coiled shaped. They are rigid forms due to the spiral structure and bear flagella at one or both the ends.

Filament- The body consists of small filaments like fungal mycelia.

Stalked- The bacterium possesses a stalk.

Budded– The body of the bacterium is swollen at places.

Monerans are very useful organisms. They enrich the soil and serve as an important part of the nitrogen cycle. They are also helpful in the production of some food items and antibiotics. Methanogens play an important role in the treatment of sewage. Many organisms rely on archaebacteria as the source of food.

For more information on Monera, its characteristics and classification keep visiting BYJU’S website or download the BYJU’S app for further reference.

Monerans are unicellular, prokaryotic organisms found in a moist environment and lack a true nucleus.

How does Monera feed?

Monera break down the dead matter and food in our digestive system. They can also prepare their own food, but bacteria feed on dead matter.

Where is Monera found?

Monera is found in the moist environment. They can be found in hot springs deep oceans, snow and as parasites in organisms.

Monerans are classified into three phyla:

How does Monera reproduce?

Test your Knowledge on Monera!
Q5