“Centriole is an organelle, cylindrical in shape, that is composed of a protein called tubulin.”

All animal cells have two centrioles. They help the cell during cell division. They work during the process of mitosis and meiosis. They could be found in some lower plants such as Chlamydomonas, although they are not present in many of the fungi, angiosperms (flowering plants) and pinophyta (conifers). They are usually present near the nucleus but are not visible when the cell is not dividing.

Let us have a detailed look at centrioles structure and its function. 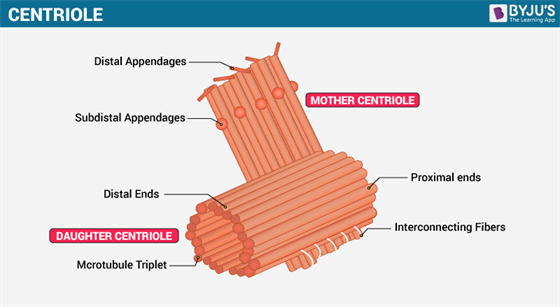 All the centrioles are formed of 9 groups of microtubule triplets organized in a cylindrical shape. The detailed structure of centrioles can be studied only under an electron microscope. These are associated together at right angles to each other.

The embryo of Drosophila melanogaster and C. elegans are exceptions to this organization. The former forms 9 pairs instead of microtubule triplets, whereas the premature embryos and sperm cell of C. elegans have 9 single microtubules.

Edouard van Beneden and Theodor Boveri observed and identified the centrioles for the first time in 1883 and 1888. The structure of duplication of centrioles was first given by Joseph G. Gall and Etienne de Harven in the 1950s.

Centriole helps in organizing the mitotic spindle and complete the process of cytokinesis. However, centrioles were believed to be necessary for the formation of the mitotic spindle in the animal cell. Although, several recent types of research have explained that the cell which does not have a centriole (surgically removed through laser) can function without it in the G1 level of interphase and can be formed later in a de novo manner.

In flagellated and ciliated organisms the location of such organelle is decided after the mother centrioles that form the base.

Following are the important centrioles function:

To learn about centrioles, its structure and function, keep visiting BYJU’S website or download BYJU’S app for further reference.

What is the role of a centriole in a cell?

The centriole is concerned with the cell division. They help in the formation of spindle fibres that separate the chromosomes during the cell cycle.

A centriole comprises nine bundles of microtubules that are hollow tubes arranged in a ring. It appears to be cylindrical in shape.

How is a centriole different from a centrosome?

The centrosome is made up of two centrioles. On the contrary, centrioles are the microtubules that make the centrosome. Centrosome produces spindle fibres during cell division.

Why are centrioles important?

Centrioles were discovered by Boveri and Edouard Van Beneden in the animal cells.

Do plant cells have a centriole?

The centriole is only found in animal cells and in a few lower plants such as Chlamydomonas. They are however absent in all the higher plants.

How do higher plants divide without centrioles?

In the higher plants, mitosis occurs with the help of microtubules forming spindle fibres without the help of centrioles. They develop spindle fibres at centriolar centrosomes, polar organizers, plastid MTOCs or nuclear envelope MTOCs.