“Microtubules are microscopic, hollow tubes made of alpha and beta tubulin that are a part of the cell’s cytoskeleton.”

Microtubules extend throughout the cell providing it with proper shape and keeping the organelles in place. They are the largest structures in the cytoskeleton and are about 24 nm thick. They facilitate cell movement, cell division, and transportation of materials within the cells. They are also involved in the division of chromosomes during the process of mitosis and in locomotion. 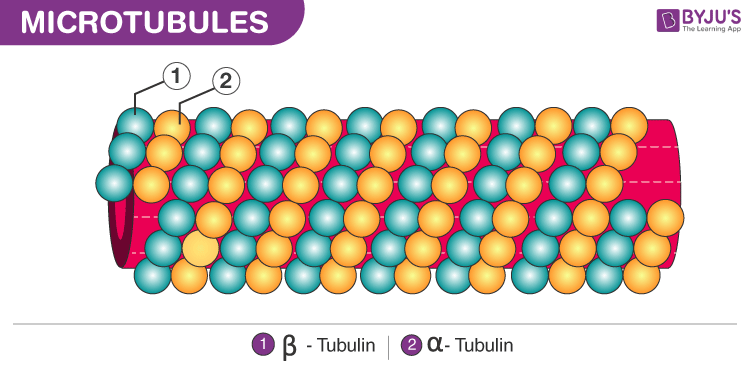 Microtubules are made of subunits called tubulin. Each tubulin is made of an alpha and a beta-tubulin attached to each other. This, tubulin is a heterodimer.

Microtubules play a vital role in all eukaryotic cells. These cells release protein tubulin in a normal manner that involves transcription of the gene coding for tubulin, which yields RNA and is followed by transcription of mRNA to produce proteins. Lumen is the inner space of the hollow cylinder of microtubules.

Following are the important functions of microtubules:

Microtubules give structures to cilia and flagella. They also facilitate the contraction and expansion of the cell helping them to move from one place to another.

Microtubules aid the movement of organelles inside the cytoplasm of the cells. They also help various areas of the cell to communicate with each other.

In the cytoplasm, microtubules form a structural network. The function of the cytoskeleton in microtubule includes chromosomes segregation, transport, mobility and mechanical support. It can either shrink or grow to generate energy which is due to the presence of motor proteins that allow cellular components and others to be carried along with microtubules.

The arrangements in microtubules are specific to cell-type. So that it would be easy to facilitate the transportation of organelles, vesicles, and proteins along the apical-basal axis of the cell. They play a vital role in cell migration as well.