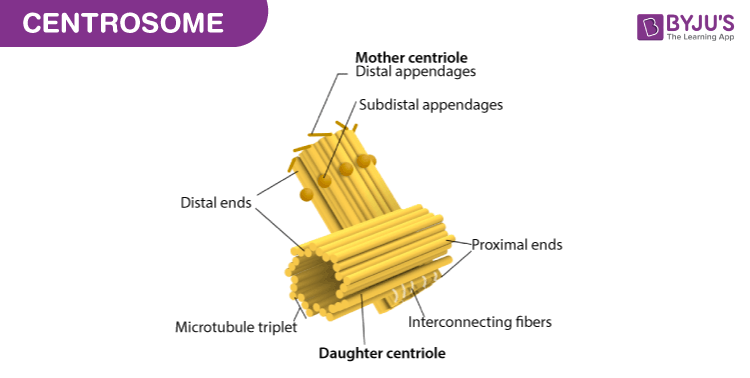 The centrosome is made up of two perpendicular centrioles, a daughter centriole, and a mother centriole, linked together by interconnecting fibres. It consists of a complex of proteins that helps in the formation of additional microtubules. An amorphous pericentriolar matrix surrounds the centrioles. It is involved in the nucleation and anchoring of cytoplasmic microtubules.

Centrosome in the animal cells is very much like DNA. During cell division, one centrosome from the parent cell is transferred to each daughter cell. In proliferating cells, the centrosome starts dividing before the S-phase begins. The newly formed centrosomes participate in organizing the mitotic spindles. During Interphase, the centrosome organizes an astral ray of microtubules that help in intracellular trafficking, cell adhesion, cell polarity, etc.

The major functions of centrosome are listed below:

In most animal cells, centrosomes are not required in the cell division process even though they add to the effectiveness of the mitotic spindle arrangement. In humans, dysfunctioning of centrosomes can stimulate cancer as a result of an increase in the levels of instability in chromosomes or due to the metastatic capability of cancer cells. However, the study on this lacks evidence.

Plants and fungi do not possess centrosomes hence make use of MTOC structures to coordinate their microtubules. Plant cells do not possess spindle pole bodies or centrioles except in flagellate male gametes which are completely present in a few flowering plants(conifers). The primary function of the MTOC for spindle organization and microtubule nucleation appears to be taken up by the nuclear envelope while the mitosis of the plant cell.

A rare pathway has been developed by higher plants to regulate the dynamics and assembly of the cytoskeleton. The microtubules are nucleated at the organizing and nucleation centres in many other eukaryotes which are committed to establishing polarity. Though animal and plant cells share the main cytoskeleton elements that imply controlled working, plants do not exhibit centrosome resembling organelles but yet are capable of building spindles thus have developed cytoskeletal arrays such as the preprophase band, the cortical arrays and the phragmoplast that participate in fundamental growth processes.

Certain elements such as the gamma-tubulin etc have a major role to play in the microtubule nucleation taking place at the surface of the nucleus which is referred to as the major operative plant microtubule-organizing centre.

Learn more about centrosome, the structure of centrosome, functions of the centrosome, and other related biological concepts by registering at the BYJU’S website.

What do you understand by a centrosome?

The centrosome is an organelle present in an animal cell that acts as the microtubule-organizing centre of the cell. It also regulates the cell cycle.

What is the main function of a centrosome?

A centrosome comprises two microtubule rings known as centrioles. Its main function is to organize the microtubules and provide a structure to the cell. It also pulls the chromatids apart during cell division.

What is the centrosome amplification?

What would happen if a cell is devoid of centrosome?

Centrosomes are not essential for mitosis. In the absence of centrosomes, mitosis occurs with a normal spindle. The microtubules form a bipolar spindle and can undergo interphase.

How is a centrosome different from a centromere?

The centrosome is the organelle that contains two centrioles. Whereas centromere is a highly constricted region on the chromosome. A centrosome is a microtubule-organizing centre, whereas, centromere holds together the sister chromatids in a replicated chromosome.