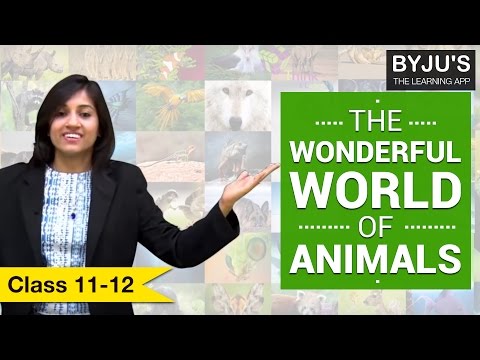 Introduction to Flora and Fauna

The ecosystem is a complex, interconnected network comprising biotic and abiotic elements. Biotic elements include all living organisms such as plants, animals and microorganisms. Abiotic components, on the other hand, include non-living entities that are vital for the survival of life and these include soil, water, climate, etc. Among all biotic elements, Flora and Fauna are the most fascinating ones.

Let us have a detailed look at the flora and fauna meaning and their importance. 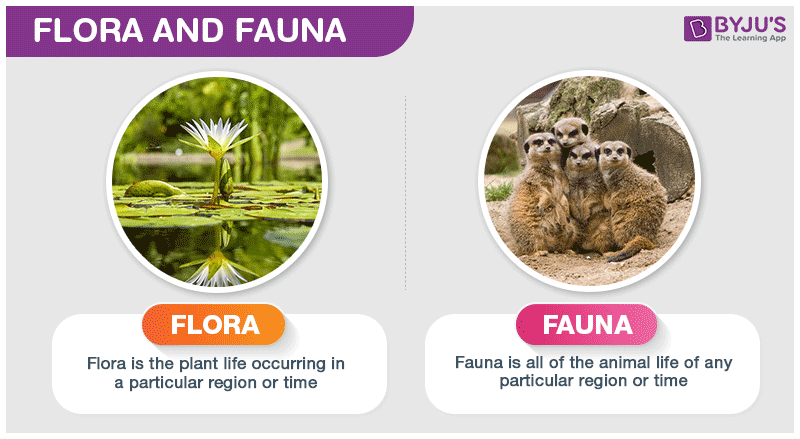 The Figure representing the Flora and Fauna Meaning

In a nutshell, the term flora relates to all plant life and the term fauna represents all animal life. Let us dive deeper into these terms, exploring their origins and etymologies.

The term flora in Latin means “Goddess of the Flower.” Flora is a collective term for a group of plant life found in a particular region. The whole plant kingdom is represented by this name.

Flora is classified and differentiated based on many factors. The best one among them is the area in which they grow or are found. Some grow in desert regions or in water, some are found in hilly areas while some are endemic to a specific geographic location.

The agricultural flora consists of plants cultivated by men for their use. Horticulture is the practice of growing ornamental and decorative flowers, which are also known as garden flora.

Fauna represents the animal life indigenous to a region. There are many explanations regarding the origin of the word. As per Roman mythology, Fauna or “Faunus” is the name of the goddess of fertility. Another source is “Fauns” which means “Forest spirits.“

Animal kingdom comprises a variety of animal life forms. Hence, the classification of fauna is much more complex than the floral division. Therefore, for ease of classification;

Since time immemorial, there have been accounts of animals that have been thought to exist but have eluded the scientific community, thereby classifying them as cryptofauna or cryptids.

Most of these reports are just tall tales but until recently, a few have documented through actual physical evidence and scientific scrutiny. One such example is the colossal squid. This cryptid has been allegedly been sighted since the 17th and 18th century, often being cited in the diaries and logbooks of sailors.

It wasn’t until the 21st century when conclusive proof was found in the form of a live specimen being entangled in a fishing net. It was taken in and studied by scientists who concluded that it was a new species of squid. Since then, there has been undisputed confirmation about the existence of giant squids.

The earth is beautiful because of all these life forms. Other life forms depend on them for various resources and exploit them.

Importance of Flora and Fauna

The flora and fauna are important for the following reasons:

Flora and fauna hugely benefit mankind through its medicinal and food offerings. Animals maintain the equilibrium by predating on different plants and animals to balance their population on earth.

Animal droppings are a source of fertilizer. The dead animals decay and act as supplement minerals for other animals.

The flora and fauna spread across the earth contribute to the aesthetic value of the earth. People visit several biosphere reserves, national parks and zoos, forests, botanical gardens, etc to enjoy the beauty of landmarks. This explains the significance of flora and fauna in our day to day lives.

Flora and Fauna contribute to the local economies through tourism. The flora and fauna of Amazon forests attract tourists and scientists which contributes to about 50 million dollars to the Brazilian economy.

Caribbean, Indonesia, Panama are other tourist locations that attract millions of people due to its widespread flora and fauna.

Flora and Fauna of India

The flora and fauna in India are diverse with a variety of plants and animal varieties. The popular fauna of India includes 500 different varieties of mammals, 2000 species of birds, 30.000 types of insects and several varieties of fish, amphibians and reptiles. Elephants, Royal Bengal Tiger, rhinos, bison, lions are some common fauna found in the country.

Flora refers to the plant life found in a particular region. It is naturally occurring or the indigenous native plant life.

What do you understand by fauna?

What is the difference between flora and fauna?

Flora refers to all plant life and fauna refers to all animal life.  Fauna cannot prepare their own food so they depend upon the flora for their food.

What is the importance of flora and fauna?

Flora and fauna are a part of the ecosystem and they are interdependent on each other for their survival. Besides, the ecosystem becomes imbalanced if there are any adverse effects on flora and fauna, such as an extinction of a species.

Flora and fauna of India include a wide range of plant and animal species, most of which is not found anywhere else in the world. Prominent examples of flora include junipers, pines and deodars, lotus, milk worts, Assam catkin yew, spiderwort, etc. Examples of fauna present in India include the Bengal tiger, Asian elephant, snow leopard, Indian rhino, Indian sloth bear, etc.

How are flora and fauna economically important?

The flora and fauna contribute to the economy of the area through tourism. They attract many tourists. Caribbean, Panama, Indonesia, Amazon forests are some areas that make a lot of money every year due to the incredible flora and fauna found there.

Give some examples of flora and fauna.

Test your Knowledge on Flora And Fauna!
Q5